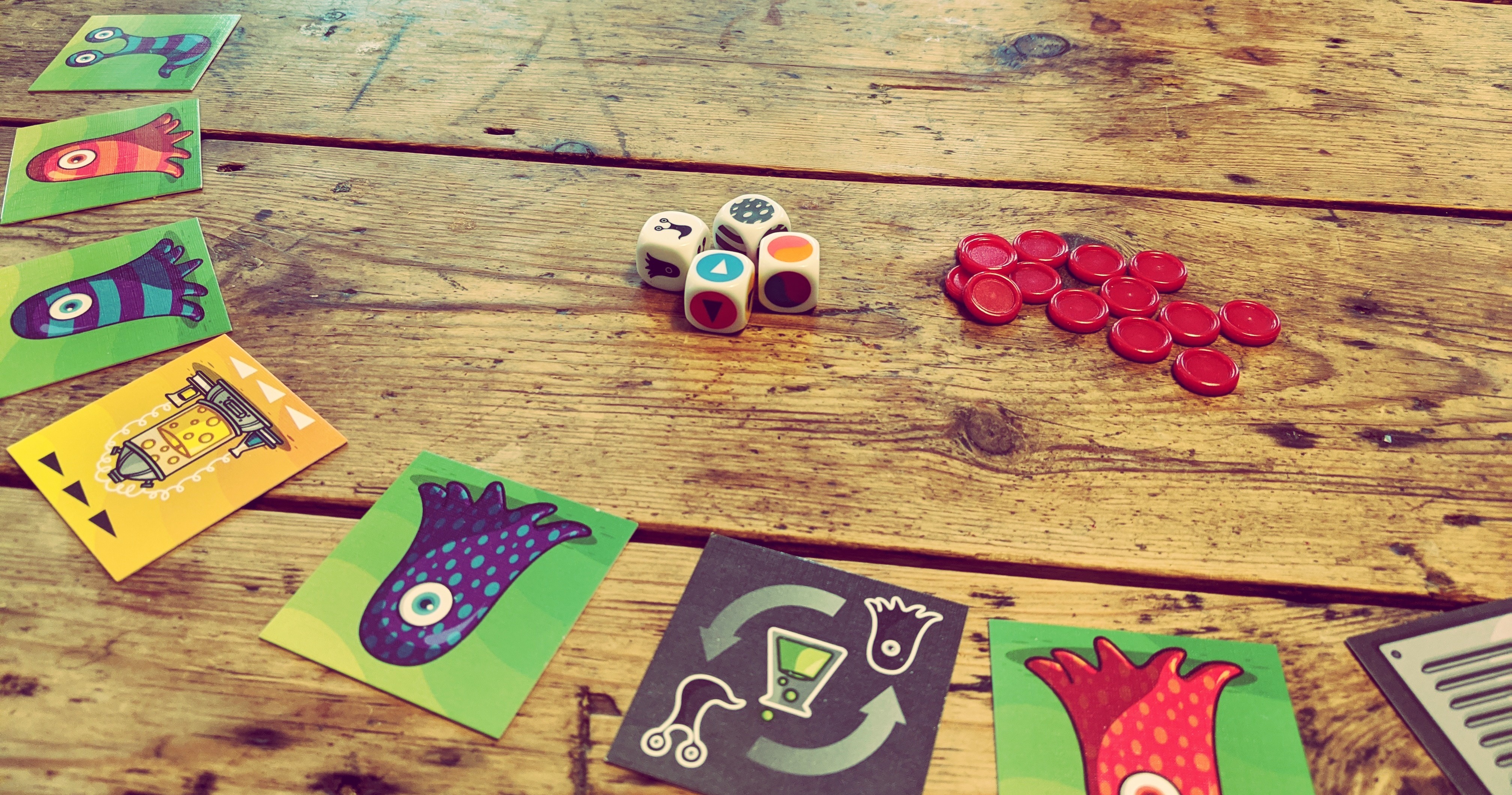 Alfie Dix, 17, reviews board games that he plays with the family and subsequently with groups of friends. Here’s his review of Panic Lab.

Winning is a major part of gaming. Unless the game only relies on luck, you can only win when you’ve played better than everyone else and winning is the reward for this excellent play. For me, winning is the exciting climax of the game: when the scores are counted, and you come out victorious. However, what happens if you were doomed from the start? If one player has much less of a chance of winning than another.

In a 4-player game, if the chances of each player winning isn’t exactly 25% then there’s an inherent problem. Due to this, I tend to refrain from recommending games that rely on dexterity, speed, or prior knowledge as there an immediate disparity between players. One great example of this is children and trivia games. How could any child hope to win a trivia game against someone with decades of experience and knowledge. The only way for a child to win will be through rigged victories.  Hollow victories = unsatisfied players.

Speaking of one-sided speed games… let’s talk about Panic Lab. You may already be able to tell this isn’t going to be a game for everyone. Panic Lab is a speed game where you have to efficiently locate an amoeba situated around the circle. However these amoeba go through drastic changes of skin colour, skin pattern and even body shape, all of which must be accounted for on your hunt for the correct monster.

Lay all the tiles at random in a circle. On each turn simply roll the 4 custom dice. These will tell you, which point of the circle to begin your search and the three qualities of the amoeba you are searching for. In her head, each person then searches the circle. Locating the starting point and moving around the circle in the direction indicated on the tile. While passing through tiles different things happen. Air vents force you to miss large sections of the track and take you immediately to the next air vent and machines change the qualities of the amoeba you seek. The aim is to be the first person to touch the correct amoeba. The player who does this receives a token and the first player to get five tokens wins the game.

This is an inexpensive game in a compact metal box, which makes it a good game for travelling. Furthermore, as many people can play as can fit comfortably around the board, making it a solid party option.

However, the game almost has a sense of being incomplete. It is very one-dimensional. Only speed can win you the game. There are no expansions except one that was given out at a tournament in 2017 and with little variation to keep players engaged, I suspect the future of this game is bleak. While I’m sure there are house rules that could change the state of this game, at its core, it is all about speed. It could be argued that strategies like mirroring opponents and pre-emptively guessing the correct tile could work, but these aren’t enough to make the game more interesting.

I cannot recommend the game unless you are a group of equally speedy players looking for a simple speed game, quite the narrow category. If any one person was to be slower than the rest of the players, that player is likely to only score if everyone else messes up, which is unlikely. This imbalance creates a strained atmosphere. This is what happens in our house – it’s impossible for mum to even win a point. No competition reduces the fun.

Perhaps the inclusion of a memory element, or time penalties for those with more tokens could improve this game but as it is, I don’t recommend Panic Lab for your family collection.