This month David Brain shares his Eight Games. David Brain is a games designer and cruciverbalist (look it up) from London. If you are interested in some small games that only work with three players (no more and no less!) then have a look at www.three.games for free print-and-play files.

David’s personal motto: Never put off to tomorrow what you can put off until the day after tomorrow. 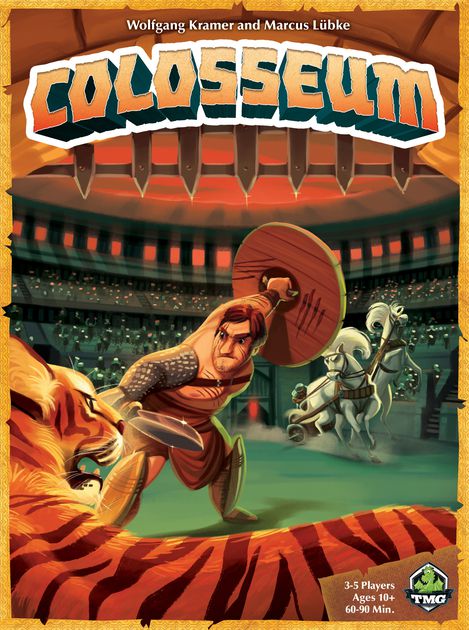 Of course, this choice for me is rather skewed by being brought up in a game-playing family which had a cupboard full of classic Waddingtons games and not a Monopoly in sight. So our idea of family games may be a bit more complicated than some!

My family’s current favourite is Colosseum, a delightful game about putting on shows in Ancient Rome and trying to attract the best audience. Buy events that tell you what tiles you need and then collect them, or do it the other way around. It has a bit of dice-rolling, a bit of set-collecting, a bit of trading and negotiation and a bit of take-that. What’s not to like?

Honourable mention: Lemminge. Sadly, I don’t think there was ever an English-language version of this, but it’s a short and sharp race game in which the terrain matters and your opponents can change it in front of you. Play cards to determine your movement but you can move further if you can play lower cards. There’s a fair amount of luck of the draw but the better players will usually win.

Just One. The simplicity of this design is a joy – one person tries to guess a key word based on one word clues from the other players. It builds upon various recent “guess something from constrained clues” games and creates something that can encompass all ages and ranges of knowledge with elegance.

Honourable mention: The ELL deck. There are lots of “decks of cards with letters on them” out there, but the ELL deck adds a twist by having two letters on each card. And the result opens up a whole new space for not only word games, but also quirky ideas too, some of which would be well suited to this sort of environment. I rather like one called Giftabell (all about giving fantastical gifts to fictional people) but I would because I designed it… 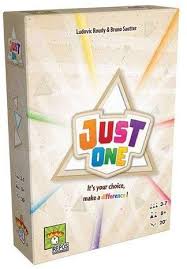 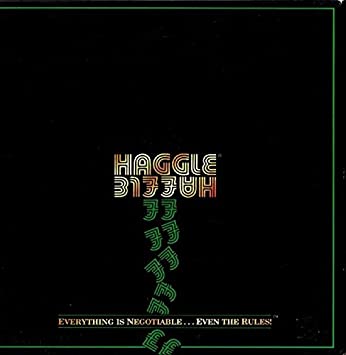 Haggle. It’s been mentioned on here before, but a well-designed Haggle puzzle is perfect for a large group gathering of people with differing levels of interest in involvement. Each player has some bits of information about the scoring values of different coloured markers, and a random set of those markers. By trading information and markers they try to attain the best scoring collection. The downside of the game is that someone has to create the puzzle and then score it at the end. But the strength of a game that doesn’t “break” if some people simply choose not to take part shouldn’t be underestimated.

Honourable mention: Race The Rails. A game that is due for publication later this year (by Gibsons Games) as a modern update of a much older design. Start at a station and follow your itinerary by hunting for the next card for your trip until you get Home. It sounds simple enough, but there are obstacles on the route and opportunities to help or hinder other players.

Set.  How can a game that is just some cards with coloured shapes on them be such a challenge? All you have to do is to identify three cards from a display that share (or don’t!) the same characteristics. But once you grasp the central concept, it rapidly becomes extremely addictive and immensely competitive for all age ranges – but most kids seem to do much better at it than most adults.

Honourable mention: Pit. From a quiet, contemplative game like Set, Pit is perhaps the polar opposite: a rowdy game of making deals, listening, and learning to pay attention to what is going on beyond yourself. Simply collect a complete set of a commodity before anyone else but without being able to say exactly what you want beyond merely offering any number of the same card. [There is an amazing “large group” variant of Pit detailed on BoardGameGeek too.] 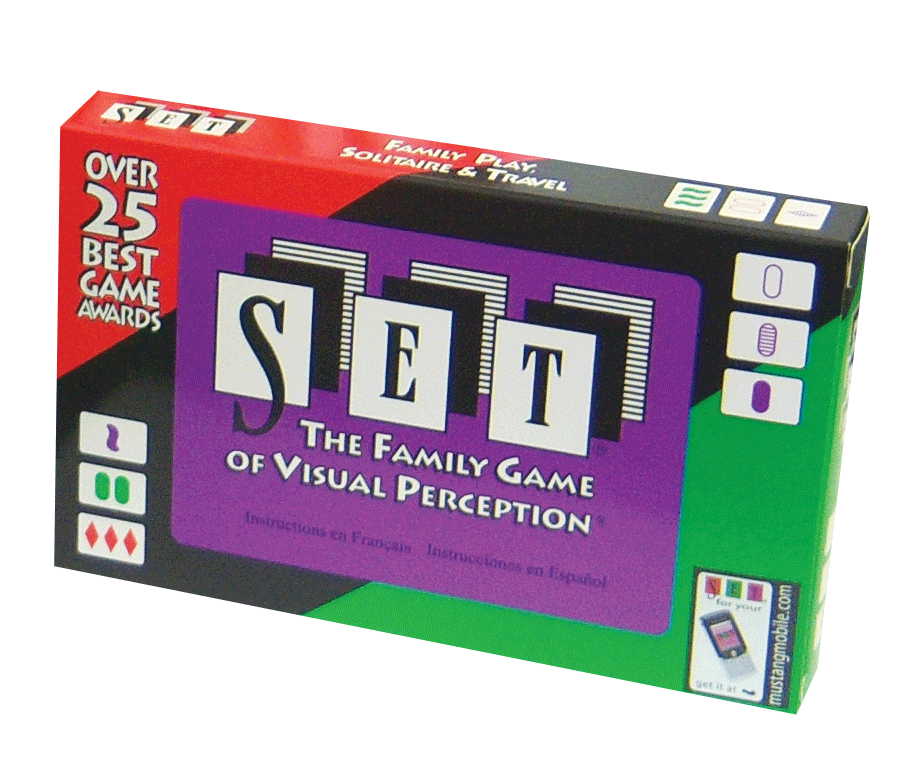 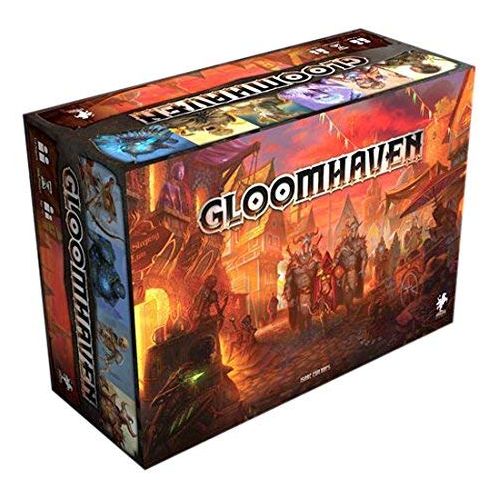 Gloomhaven. It’s the current poster-child for over-the-top production values but it also has a pretty solid adventure game underneath, albeit one that compromises a little too much for my tastes. For a group of teenagers though, it has everything you could possibly want in a ‘dungeon-crawler’ and then some. A simple card-selection system makes teaching easy, and the character development keeps players engaged from session to session. There is more admin than is perhaps ideal but that’s a small price for such an expansive experience.

Honourable mention: Wingspan. The other breakout game from the last couple of years, this is a beautiful distillation of modern game systems (card drafting, resource management, engine building) with a surprisingly engaging thematic chrome that covers up the occasional logical absurdities. Place bird cards into different environmental regions to gain extra abilities that help you gain more cards and thus more points. It’s also very hard not to like the art work which adds extra appeal (although maybe the GCSE Biology students will recoil at the ‘educational’ aspect!)

6: A game to take to a job interview:
Demonstrate your best qualities and answer questions while you play? (This really should be a thing)

As a designer, the obvious answer here is to pick a game that you have designed, to show what you can do. And I won’t pass up that opportunity with a fairly fast tile-laying city building game called SimpliCity. Players draft tiles to place on a shared board, building areas for scoring. Although it is not published yet (something has been happening for the last six months or so that seems to have caused some difficulties with all sorts of things but I can’t think what it could possibly have been..!) it is due out by the end of the year. But the reason I would pick it is that it is a great example of how sometimes it takes someone else to solve a design issue that has been causing you problems, which is the sort of thing that crops up all the time in a work environment. In this case I had originally designed the core of the game probably ten years ago but couldn’t figure out how to make the tile drafting work fairly. And then, a few years back, Kingdomino came out, with a brilliant “your turn order next turn relates to what you take this turn” system and I instantly knew that this solved my problem.

Honourable mention: Key Market. Also by me. This is far too big a game to play at a job interview but it would be hard for me not to show it off, if only for the gorgeous artwork by Juliet Breese that adds so much to the game. It’s a relatively deep economic game about generating resources that you can sell to raise money in a fluctuating marketplace or use to gain other bonuses, but with a tightly constrained board space and some special powers which change from game-to-game meaning that different strategies are needed each time, which shows how flexibility to adapt to changes is important. 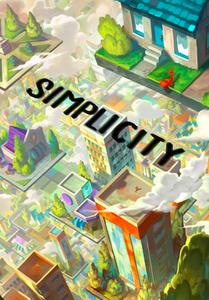 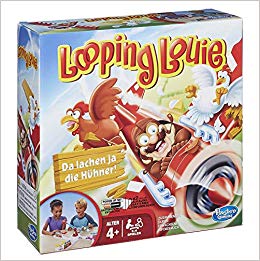 Loopin’ Louie. Easily the most skilful and challenging game on this list. It requires nothing more than the ability to push a lever with varying levels of pressure at the right moment, but it generates more laughter than almost any game I have ever encountered. It’s ostensibly a kids’ game in which a mechanical biplane on a long arm swoops around a farm trying to knock chickens off the top of a barn, but it’s actually a game of perfect timing, muscle control and occasional swearing (even with children…)

Honourable mention: Mini Town. A roll-and-write game would always be a good candidate for an environment like a hospital, and there are nowadays a very wide variety. Mini Town is at the more straightforward end of the spectrum, since it only requires one pair of dice that only need to be rolled by one player, and small individual grids that can be marked off fairly easily (I played this quite a lot with my family during lockdown via WhatsApp.) Fill a 6×6 grid with houses, parks and other town buildings and keep your fingers crossed that it doesn’t all go wrong at the end…

The Dark Imp says: Hooray – Mini Town, a Dark Imp game, gets an honourable mention! You can get your free print-and-play version here.

Snowdonia: Deluxe Master Set. The original Snowdonia is a lovely worker placement game about building a single-track railway line up a mountain through rain and fog (it is set in Wales, after all!) But it quickly grew beyond that, as designers started to create new scenarios that could be plugged into the game, expansions that added new features and a seemingly endless supply of new trains that grant special player powers.

Recently, all of these scenarios, expansions and trains were gathered together in a single “master set” with a box that is as large as a small suitcase and stuffed with loads of lovely wooden minis as well as a seemingly endless number of cards. The chance to have the time to properly explore the different permutations of a game that rewards repeated play would be hard to resist.

Honourable mention: Civilisation. The listed time for this game is six hours which, with experienced players, should be entirely possible. It is definitely not a game for people who don’t like playing with those who suffer from ‘analysis paralysis’ as planning your turn can take a while.   It’s an epic game about the ancient world which has a surprisingly short and elegant ruleset but where the interactions and calculations rapidly become very complex. Found cities, make advancements, invade your neighbours and cope with calamities traded to you by sneaky opponents – there’s a lot going on here but it never feels overwhelming. With a group of six or seven players who understand what’s involved, this is one of the most involving game experiences to be had, and it’s best not being rushed.   Plus, unlike with Diplomacy, there’s an outside chance you’ll still be friends with each other afterwards. 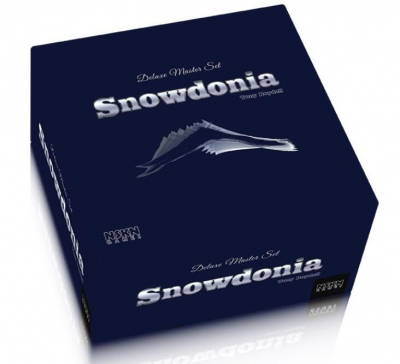