What is a network building game?

In this blog: Ellie explains what ‘network building’ means in board gaming.

Each month I’ll share a blog in which I explain one board-gaming term. This month we’ll look at Network Building.

In network building games, players aim to create networks across a board in order to connect certain locations with each other. Network building could be used as part of a game or the entire game could be build around this concept.

How are networks built within a board game?

Network building games almost always centre around a map or plan. Your aim is usually to create a route that joins different points on the map together. You may be connecting cities with train tracks or connecting electrical components with cabling but the mechanics are similar.

Some network building games give players a bunch of components that represent the different parts of the route. These could be wooden rails (as in On the Underground – see below) or plastic trains (as in Ticket to Ride), for example, in a player’s own colour that are laid along pre-printed sections of track. As more components are laid, the route grows. Sometimes there is no pre-existing route drawn. Instead players are working on a square or hex grid map and are able to place their track freely where they choose. In Catan, players create a network of settlements and cities connected by roads. The roads may be placed along the edge of any hex on the map. Other games may instead require players to draw on the board to create their own network. In Railway Rivals, for example all players have a different colour pen in which they draw their train line on a hex map – connecting cities in order to run trains.

Instead of players choosing where they lay their route, it may be that a series of communal routes are pre-printed on the board. Everyone can use the routes, but you must build your buildings in a way in which they are as well connected by routes as possible. Here you are attempting to optimise your placement of buildings so that you are making the best use of the network as you can. An example of this is Taj Mahal, where players are attempting to build temples that are connected to one another. 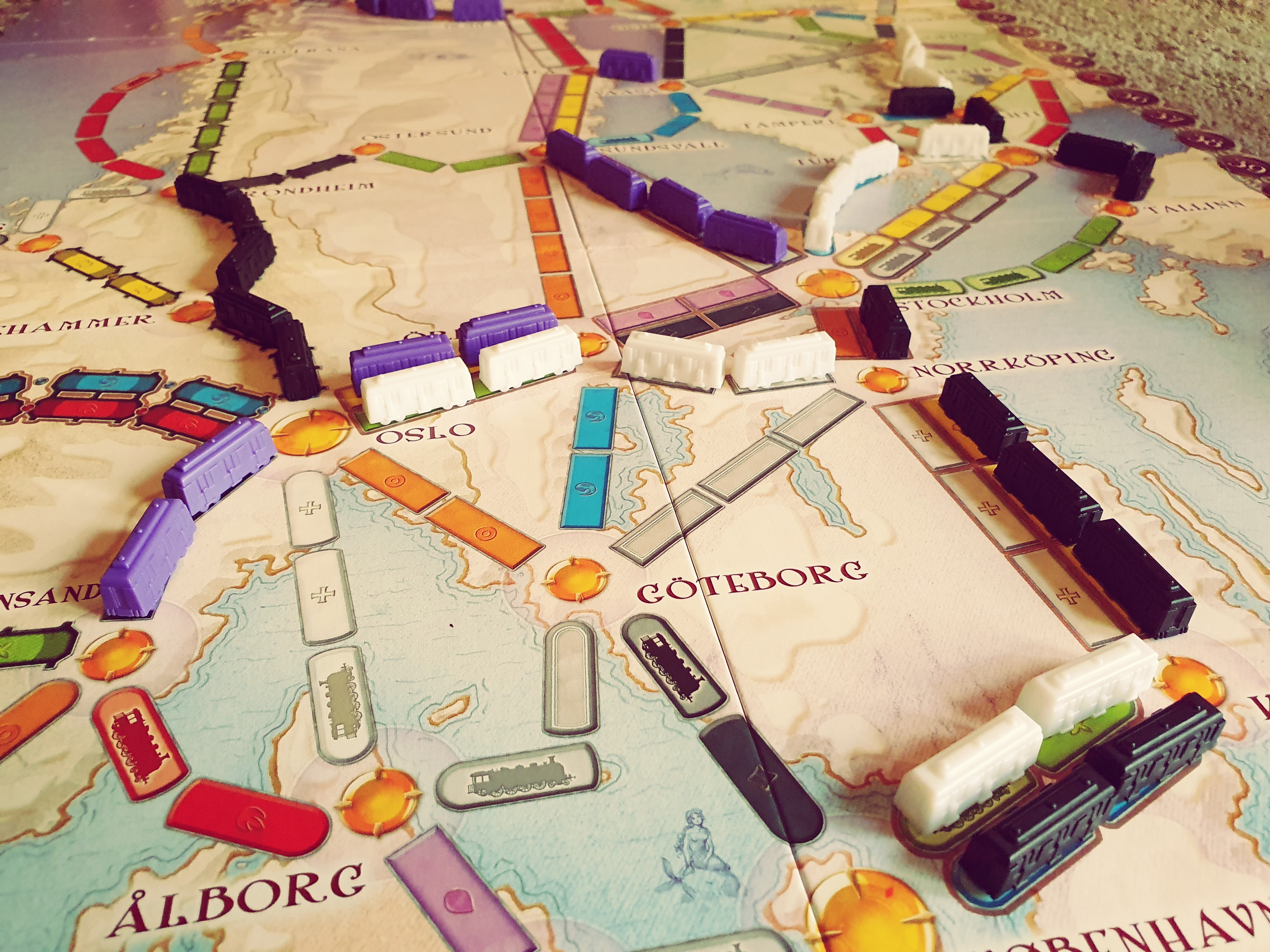 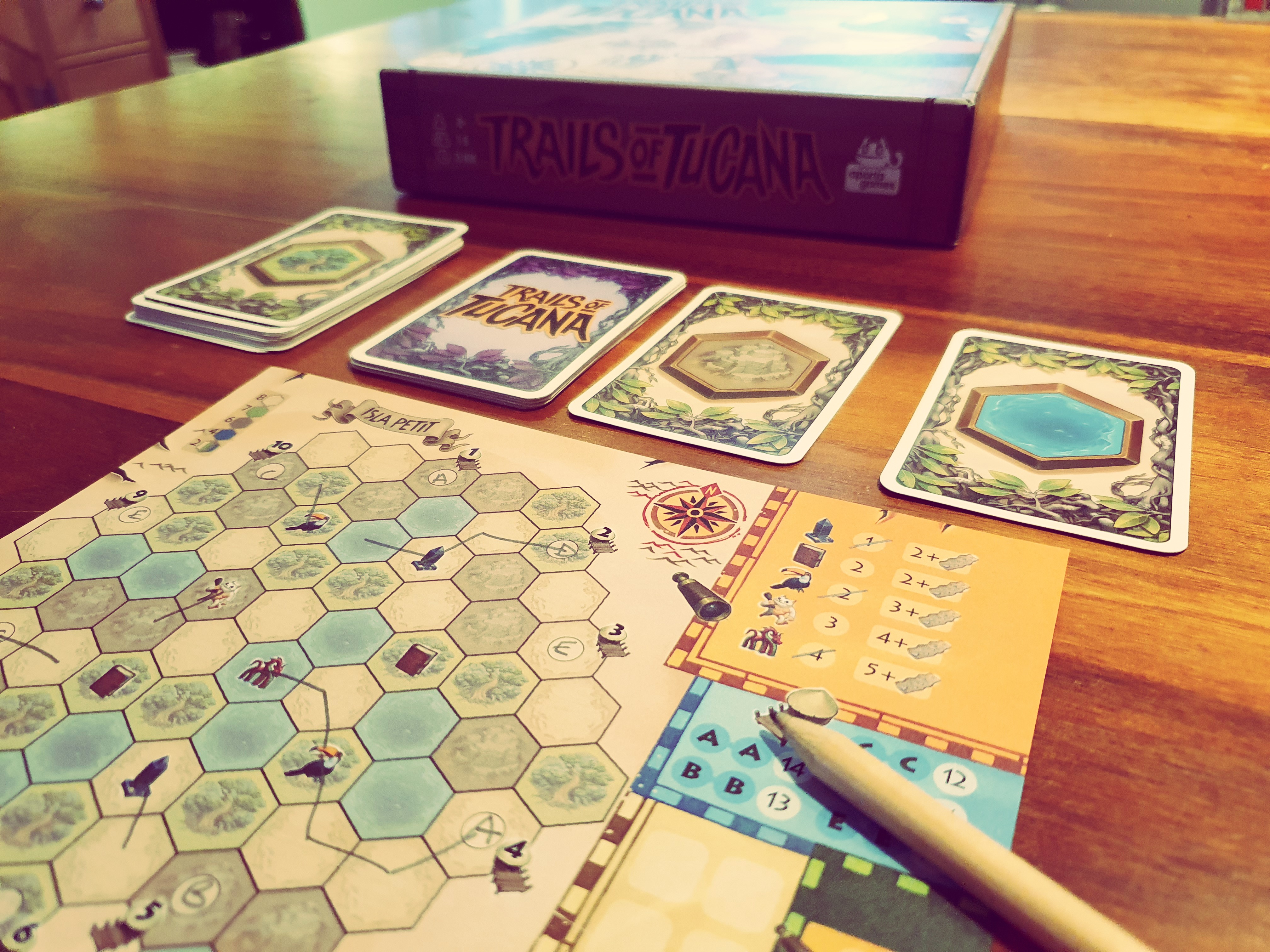 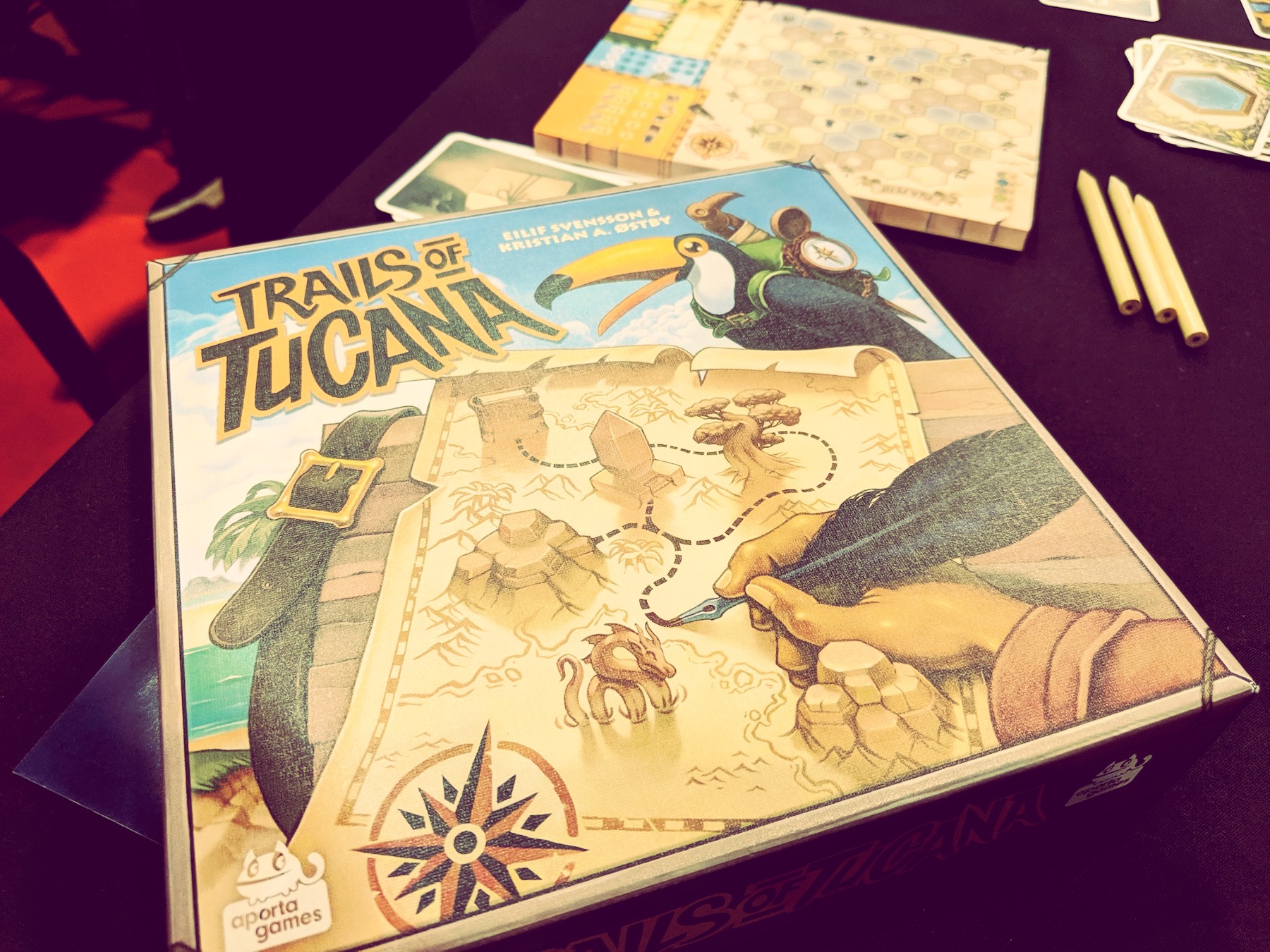 However the networks are created, if players are all working on a single central board, they will always be competing for valuable space. There is a tension about whether you’ll manage to build a crucial part of your network or whether another will build there and prevent you from executing your master plan. You’ll need to plan in advance, prioritising the steps you need to take to achieve your objective. Having a firm Plan B and maybe a Plan C, will help you adapt to the ever-changing conditions of the board. In fact, a strategy that leaves your options open will be valuable in many games.

If the idea of network building appeals to you but the potential conflict over space puts you off, try a network builder with individual player boards. These games are usually ‘roll & write’ games in which some dice are rolled (as in Railroad Ink) or possibly some cards are flipped (as in Trails of Tucana), to give all players the same conditions to use on their own, usually identical, boards. Here players will usually have a lot of choice about what they do on their boards and each player may adopt a different strategy. So even though the input is the same for all players, the output is totally different. Players will receive points for different achievements and will compare scores at the end.

What is an example of a network building game?

On the Underground, each player has two or three different colours of wooden rails (like matchsticks). Each of the different colours represents a different line on an underground train map. The available routes and the areas the routes connect are printed on the board. Players may start new routes from any location on the board, but when they place more of the same colour line down, it must connect to previously laid track. The line may branch with the help of special branch tokens. Some sections of the map have the space for tracks to run adjacent to each other allowing multiple lines of different colours to connect the same stations. 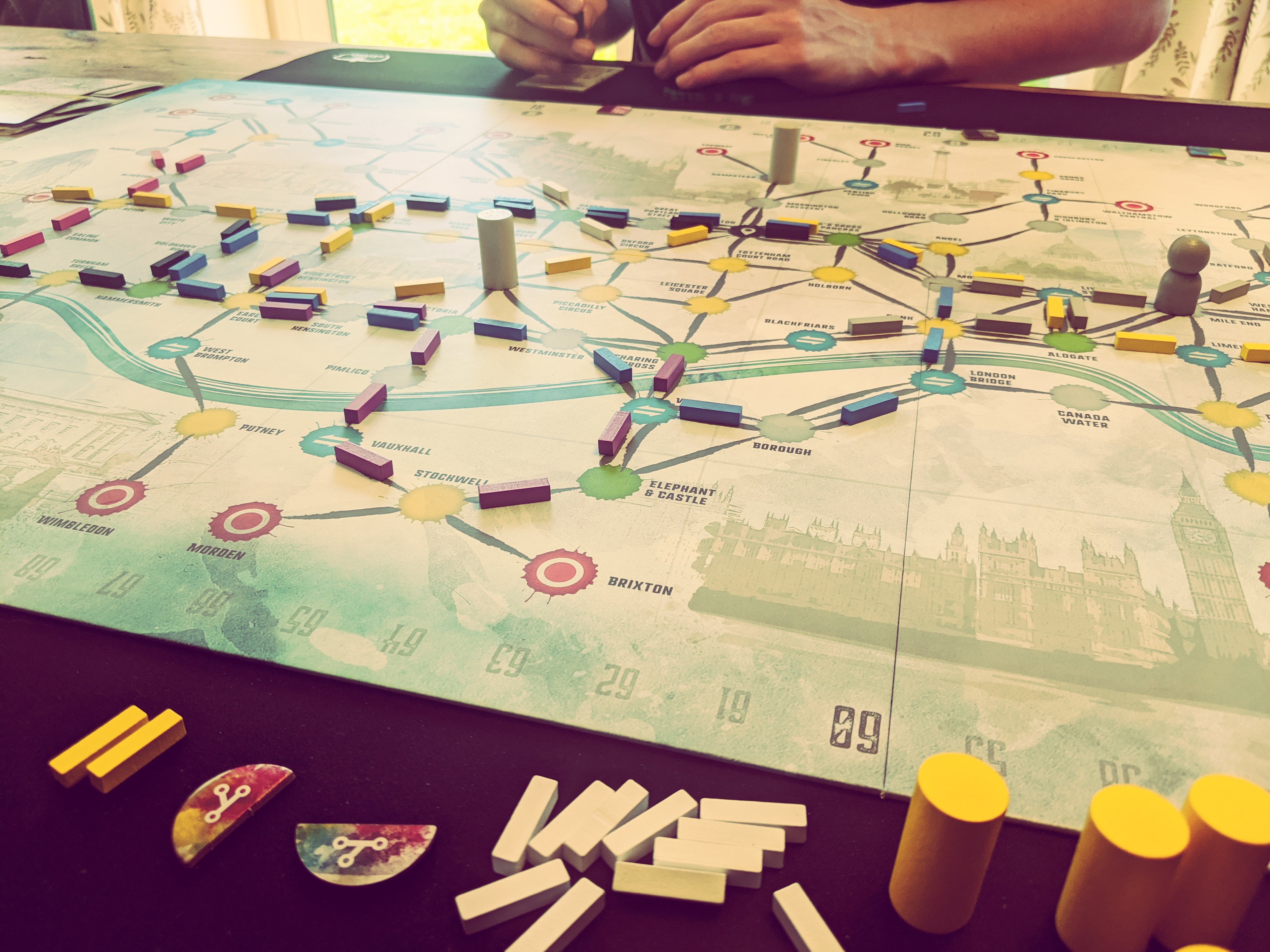 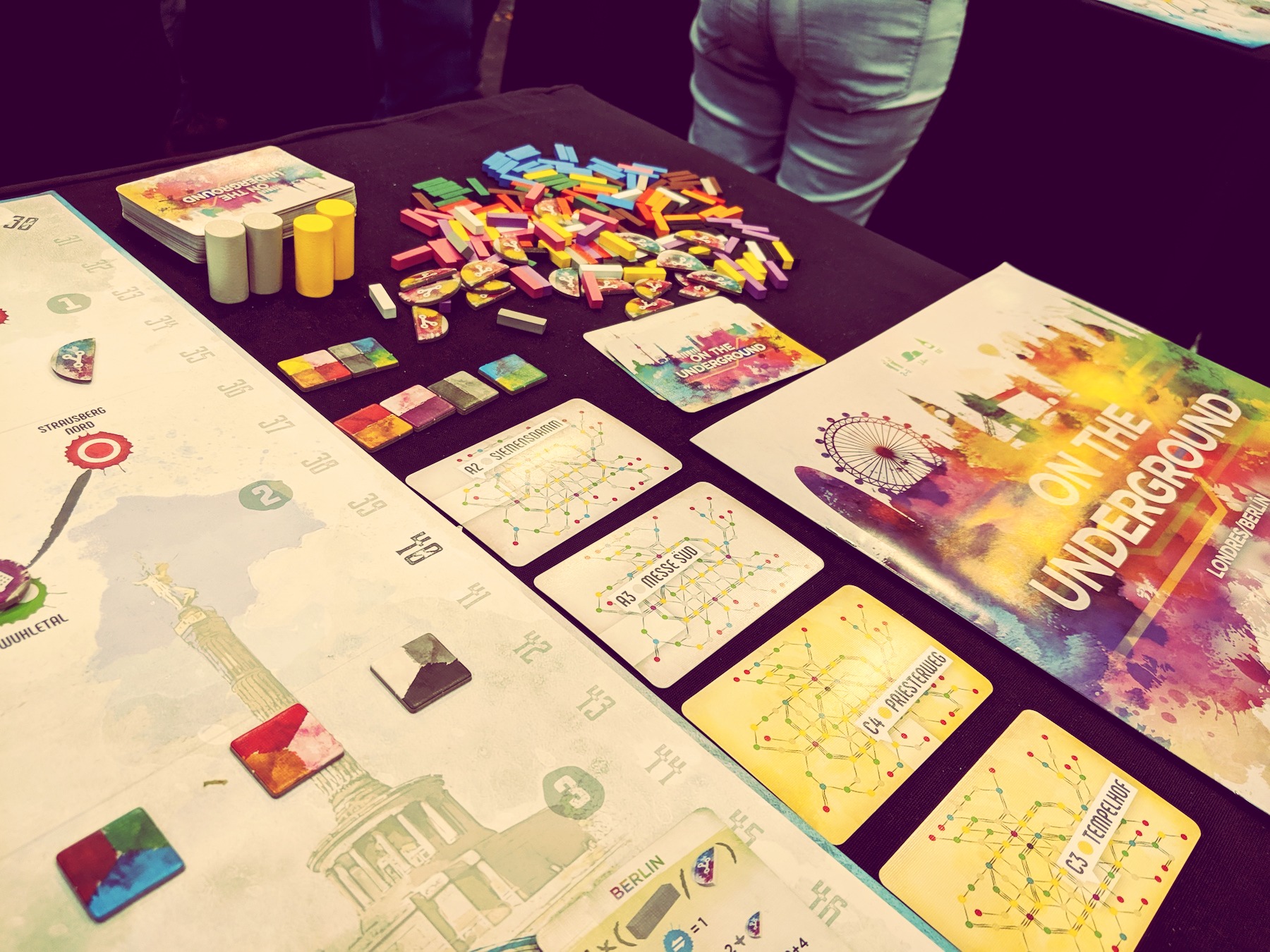 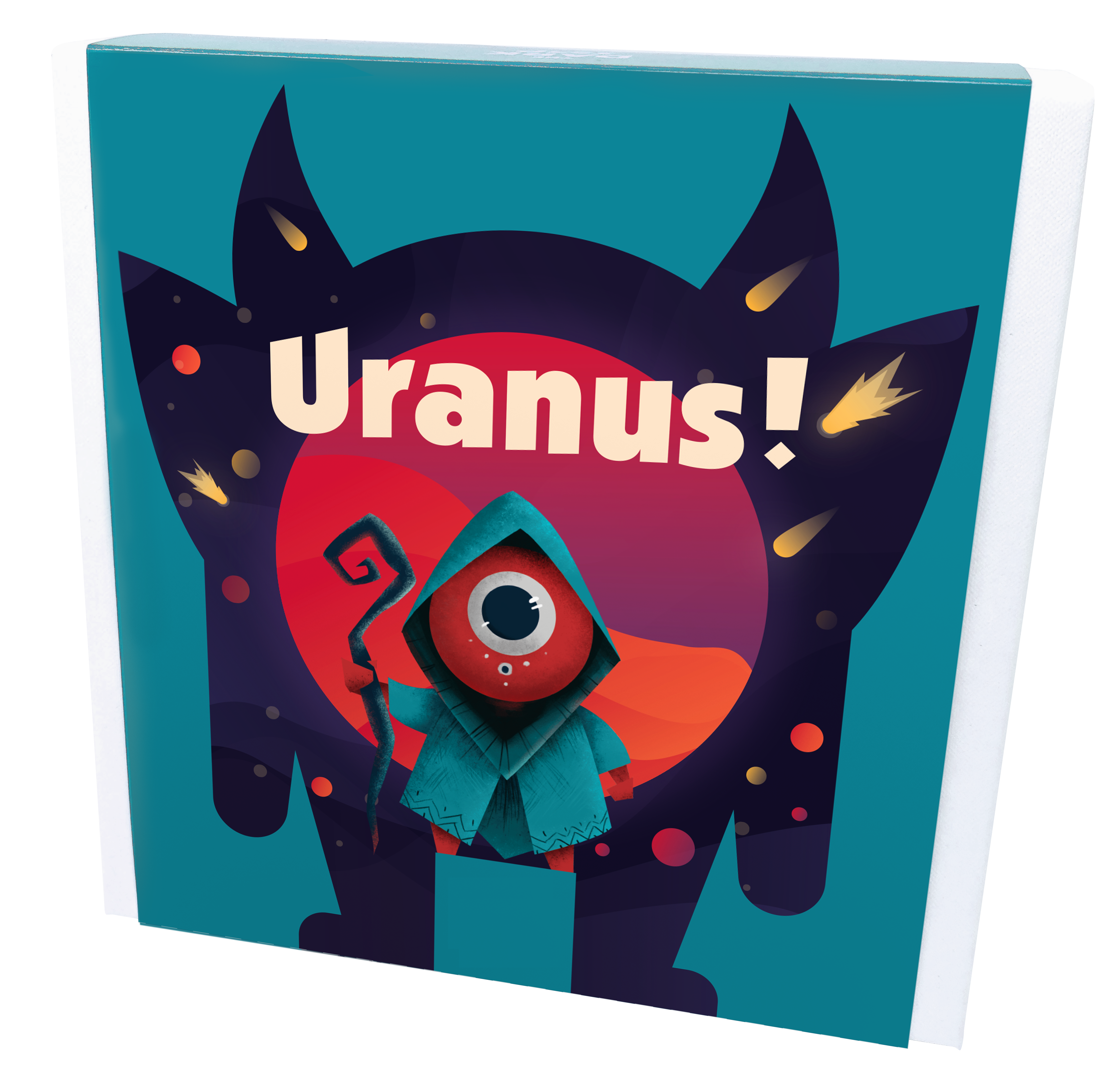 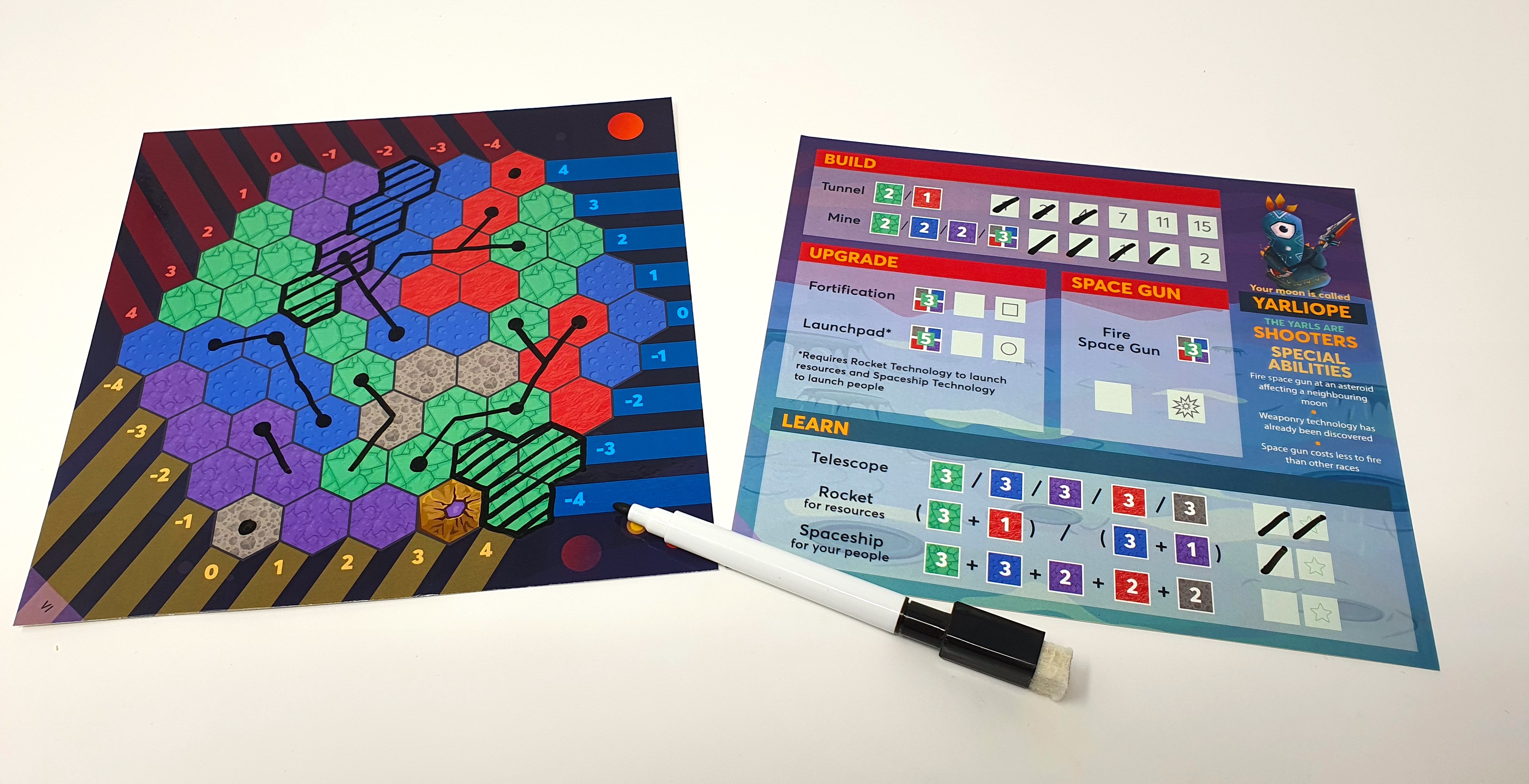 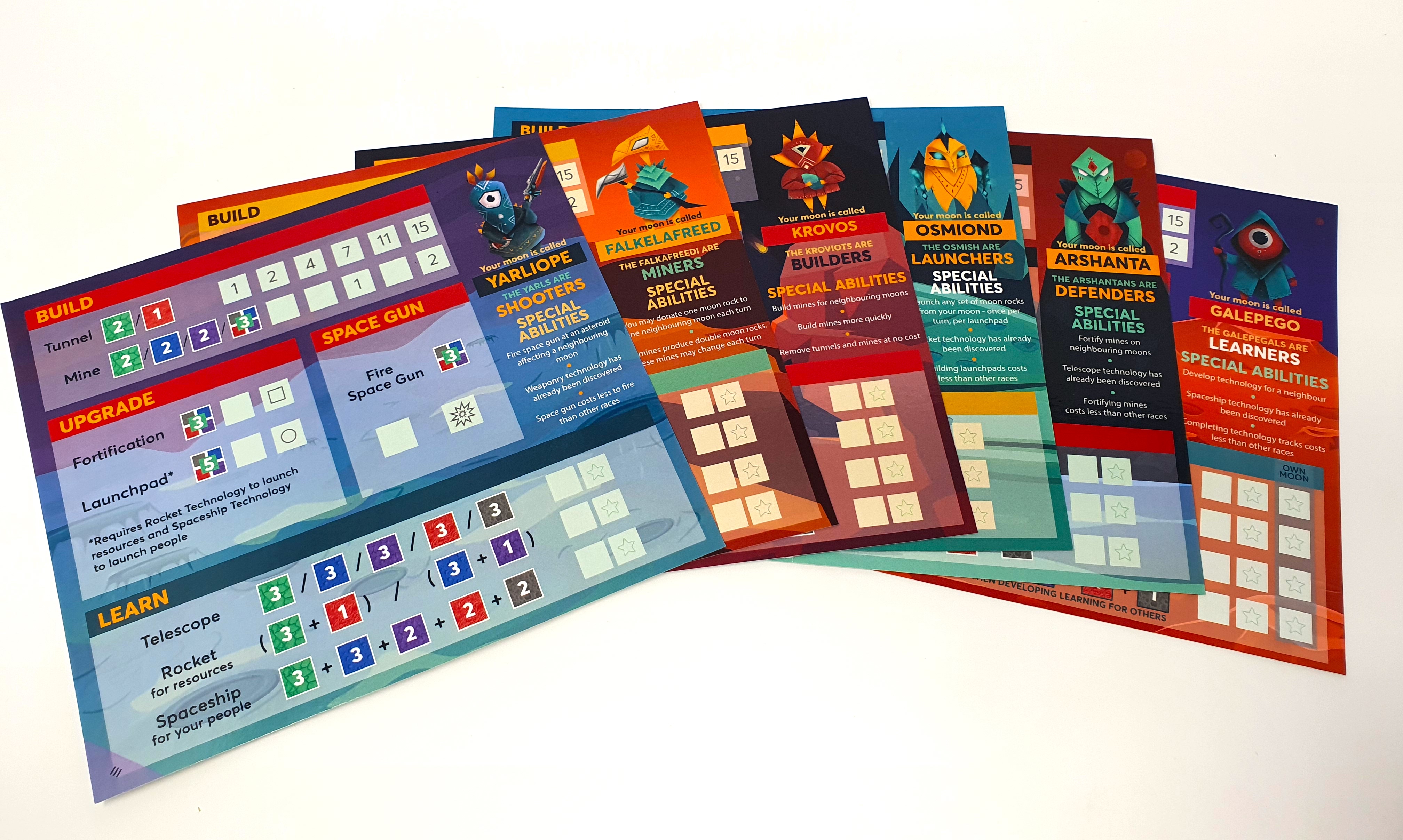 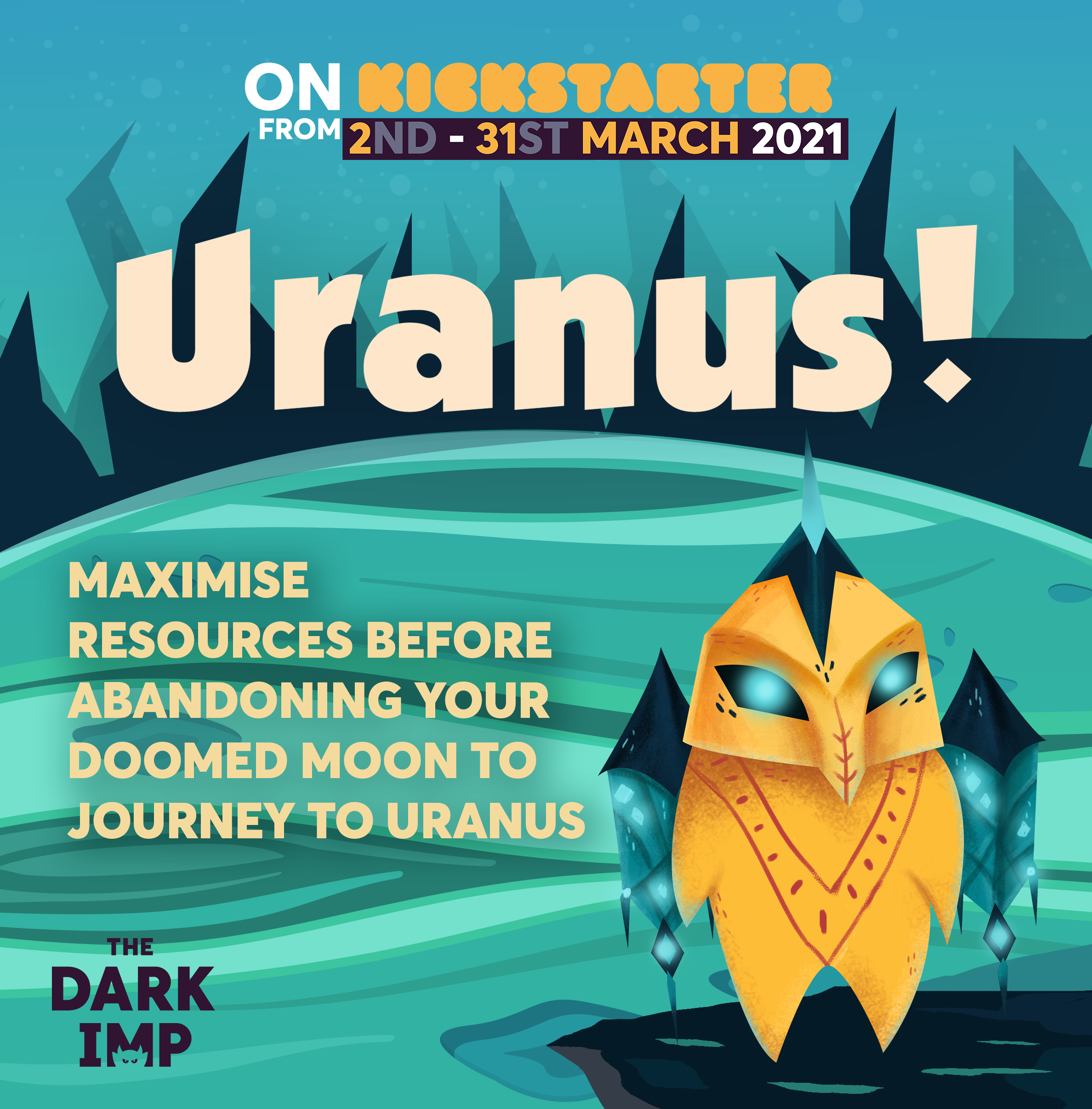 My own game – Uranus! – is a cooperative network builder. Each player represents a different alien race, inhabiting a different moon – a hexagonal board split into smaller hexagons. All of the moon boards are different, with a different distribution of five different terrains across the board. Players start with ten mines on different hexes. The mines each produce a moon rock – of the colour of the terrain. Players must connect mines by drawing tunnels on their boards so that they can combine the moon rocks together to use in different projects. Some projects may require 2 red moon rocks together, while another might require a much bigger network of all the different kinds of moon rock.

Players can use some combinations of moon rocks to build more mines and construct more tunnels. As they move through the game, players will want to alter the network of tunnels, so they will erase previously drawn tunnels and create new ones to be able to combine moon rocks together in different combinations to fulfil the requirements of new projects.

As players move through the game, the moons are suffering from severe asteroid attacks – which wipe out sections of their moon, damaging tunnels and mines. So the networks are continually changing. The aim of the game is to develop technologies that allow players to send moon rocks to Uranus to build habitation modules so all the alien races can leave their doomed moons and live on the central planet. But moon rocks must be sent to Uranus in the right combinations (in the right network groupings) otherwise chaotic space junk will be created.

Each alien race has its own special powers which it can use to help neighbouring races – producing extra moon rocks & sending them to others, remote network building assistance or help with defence or attack.

While there are lots of network builders, there are far fewer cooperative ones and still fewer that use the ‘draw and erase’ mechanism allowing networks to change and evolve over the course of the game.

Uranus! is coming to Kickstarter on 2nd March 2021. Sign up for campaign notifications here.

I’ve mentioned a lot of wonderful games in this post, but other great (and more complex) network building games include: 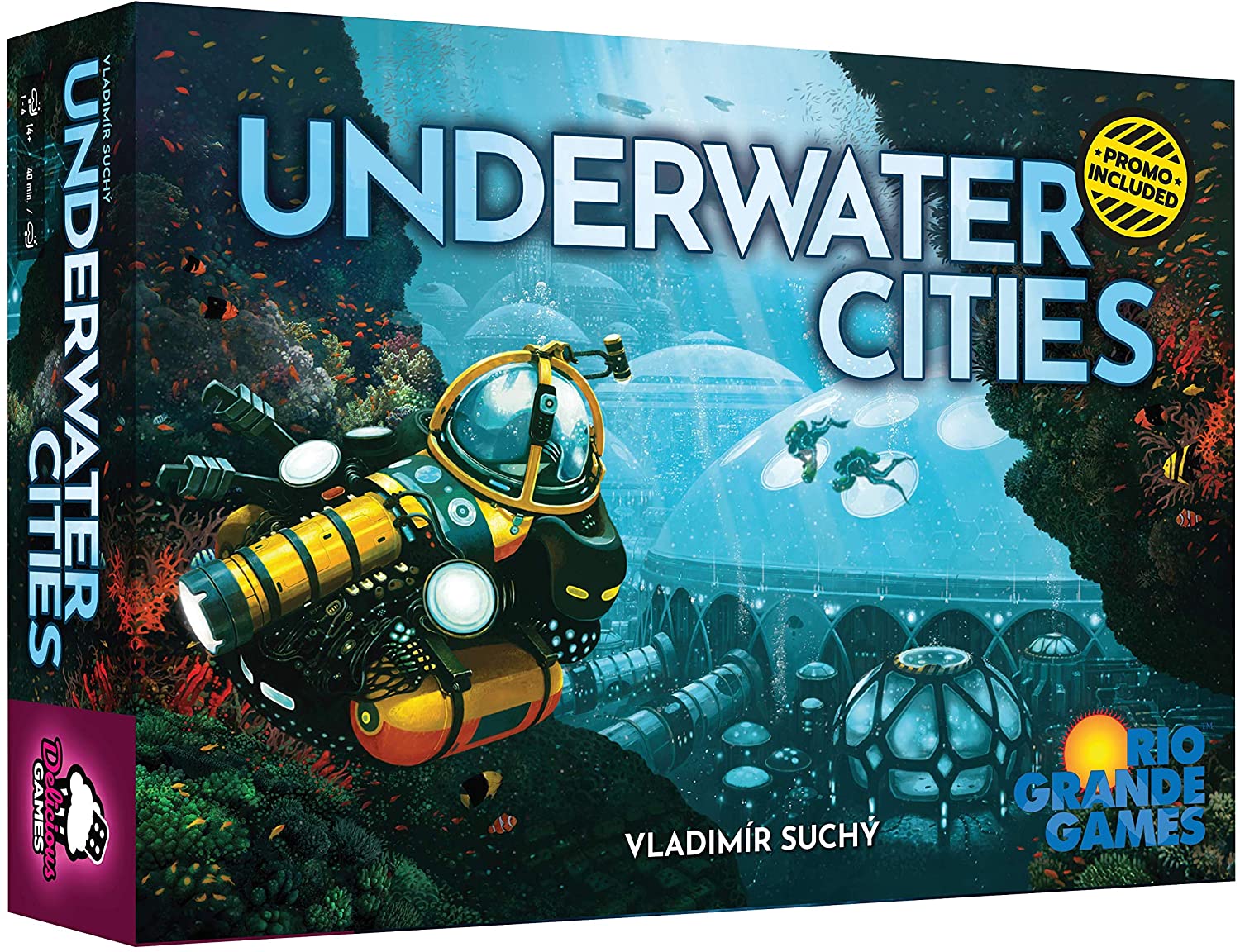