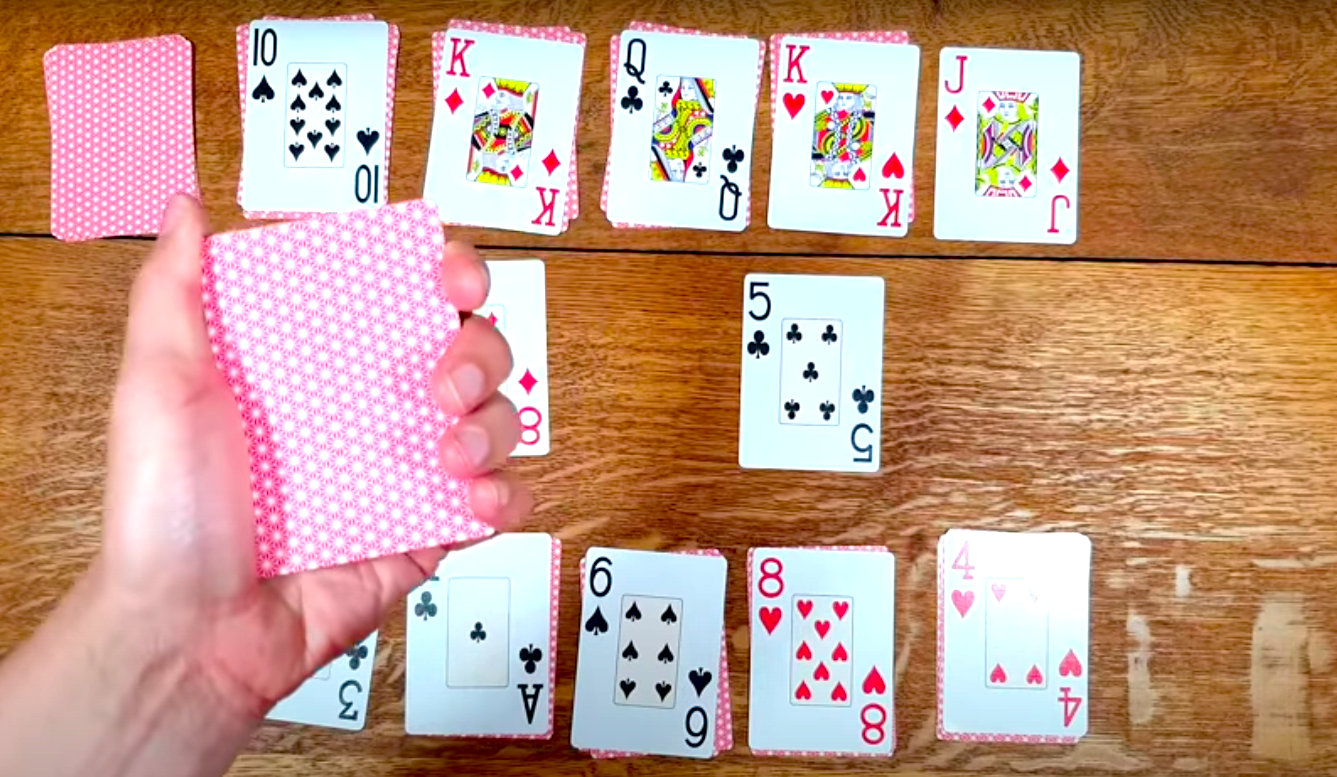 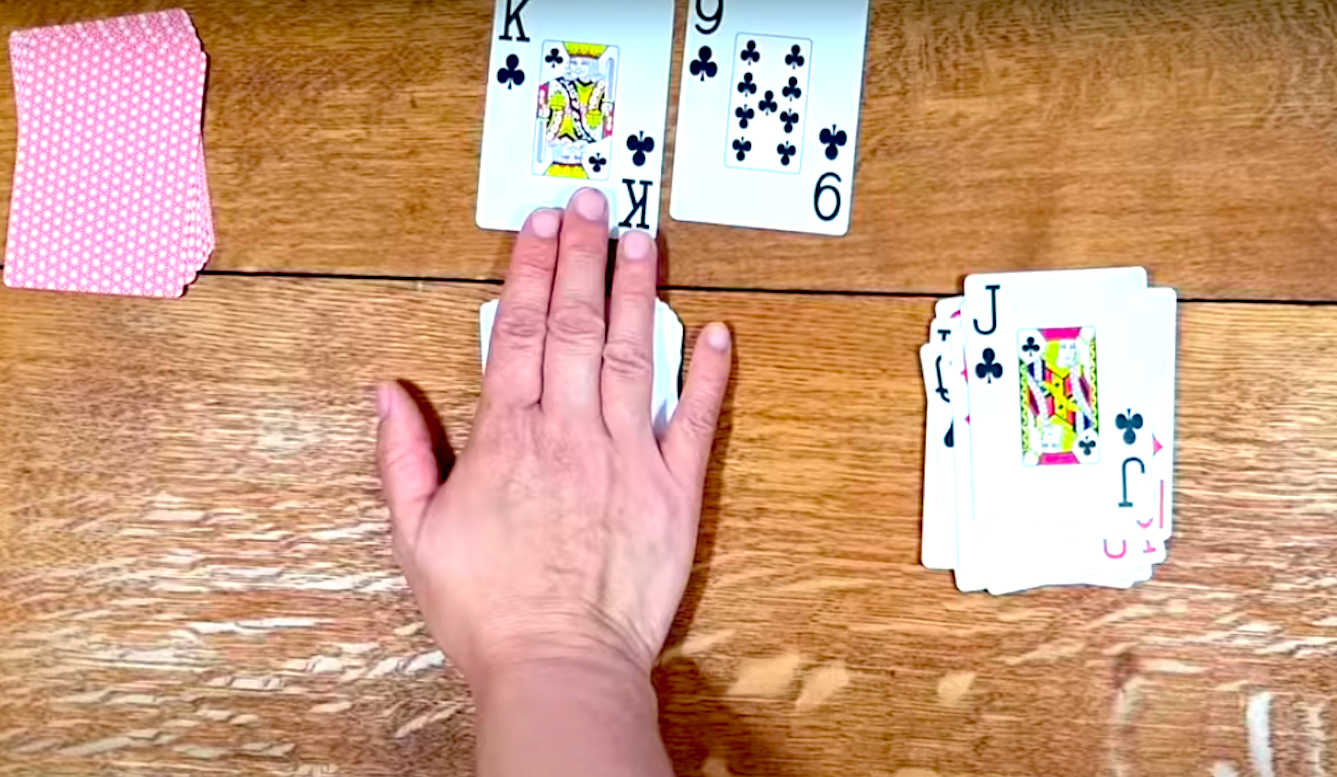 Slam, which is also as Spit, is a speed game for two players. To succeed, you’ll need hyper-awareness and dexterity, rather than strategic brilliance. Move as quickly as you can, slam your hand on the right pile at the right time and you’ll inch closer and closer to victory. But beware, it’s a given that you’re going to get slapped and possibly quite hard!

How to play Spit (Slam)

Split one deck of cards into two equal piles – one for each player.  Players must sit opposite each other.

Preparation for each round

Each player lays out some cards from their hand (called the spit pile) onto the table in front of them as follows:

Each player keeps the rest of their spit pile in their hand. Simultaneously, both players reveal the top card on their spit pile and lay in on the table in between the two players. This indicates that the round has begun.

Each player aims to get cards from their tableau piles onto the two cards in the centre of the table. These form two foundation piles. We are not interested in the suits of any card in this game, we are only interested in the rank of the card – i.e. ace, seven, two…

You may place a card that has a rank one higher or one lower than the card on top of a foundation pile. A card of the same rank may not be placed on top. For example, if there is a SIX of clubs in the centre of the table. You may play any SEVEN or any FIVE on this card. You may not play another six on this card.

You’ll have to be quick, because your opponent may be trying to place cards on this foundation pile too. When you place out a card from one of your tableau piles, you may reveal the card underneath it, which also now can be played out.

If, at any time, you have two cards of the same rank on the tops of your tableau piles, they may be placed on top of each other, though they must be played into the centre one at a time.

When you clear a tableau pile completely, you may place a card from the top of another tableau pile in this space and reveal the card below.

If you get to a situation in which neither player can play, you could down from three to zero and simultaneously reveal another card from your hand onto the top of the foundation piles. Then you continue play. You can do this multiple times, but only if both players are unable to play.

You must always hold your spit pile in your hand. This is so you are able to quickly reveal another card, when both players agree to do so, but more importantly to stop you using this hand to play out cards from your tableau piles onto the foundation piles. You are only allowed to use one hand to do this. This restricts the speed you can move at and prevents players from using a hand to block cards from the other player’s view.

Players are now ready for the next round.

Players are aiming to run out of cards.

When setting up a round, if you don’t have enough cards to complete your tableau, just create as much as possible. When there is only one foundation pile, at the end of the round, players are aiming to slam the empty table, where the other foundation pile would be.

If you have no cards in your spit pile and you’ve played out all your tableau piles and slammed your hand on the empty table, you win the game.

I spent hours playing Slam with my sister when we were children. We enjoyed the head-to-head-epic-battle nature of the game.  We also enjoyed ‘accidentally’ slapping each other really hard. It might not be the best game for siblings prone to violence!

I do like games where adults and children can compete on a level playing field, and unless the children are very young and are just developing motor skills, they’ll get pretty fast pretty quickly. As there’s no strategy – just a good eye and a quick hand – the match usually ends up being pretty even. Anyone with impaired coordination or dyspraxia is likely to find this one tricky though.

Video: How to Play Spit 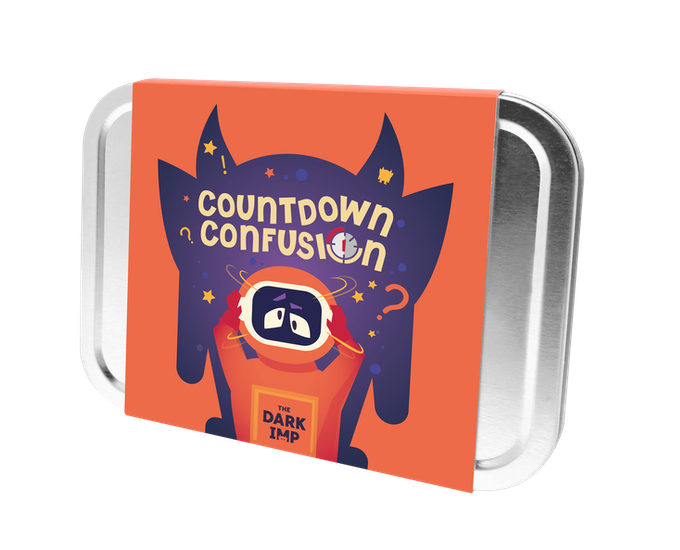 We specialise in creating original family games. You’ll find our Online Shop packed with options! If you love bidding games, try Countdown Confusion – a speed card-drafting game in which you’re trying to gather sets of cards in very confusing and difficult circumstances.

In The Dark Imp Blog you’ll find all sorts of games you can play at home with regular playing cards or just with pen & paper. If you enjoy the speed pile slamming in Spit, you’ll also enjoy Spoons – a game in which you race to grab a spoon!