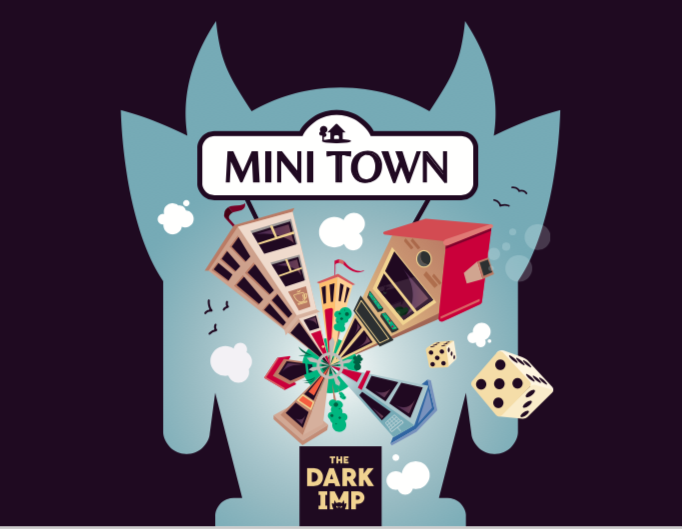 Get Mini Town for Free!

Mini Town is a roll & write city-building game for any number of people that you can download, print and play at home.

But that’s not it, as a Dark Imp friend and subscriber, you’ll get more free games the longer you are on the list. You’ll also get exclusive special offers and game tips!

We love Mini Town – especially my 10 year old – and even my board game phobic husband! We even laminated 4 game cards so we could easily play over and over.

Mini Town is a great little game for Zoom. We’ve introduced it to grandparents and siblings and even our 8-year-old loves to play.

I highly rate this game! So simple to get started but it’s the sort you want to play again as soon as you finish a round. Really encourages problem-solving with its push-your-luck mechanics and I could see players of any age loving this!

I am a teacher in Victoria (BC, Canada), and I introduced Mini Towns to my grade 4/5 class. There was a group of about eight kids who loved the game and played it many times. There was also one student who asked for a sheet to play Mini Towns over the summer break. Great little game!

I love Mini Town because I can play it single player, it only takes about 15-20 minutes, which is a great time-filler, and it’s fun to challenge myself to beat my best score.

Nicole Maddock
Mini town is an addictive little game! When I first downloaded and printed it I ended up having to print about 4 more play sheets because I just played it on my own over and over again. My husband likes board games but doesn’t really enjoy just 2 players. He likes when we can get our friends involved. This meant that during lockdowns I was stuck not easily able to play and I LOVE board games. Mini town was an excellent find because I could sit and play on my own with no set up or tear down time.
Stephanie

I always carry a couple of games in my bag to fill those moments when we’re out and one of the family complains about being bored! Mini Town is perfect for this as it’s just a couple of dice, a few sheets of paper and a pencil each. The kids love seeing their towns grow as they play – in all honesty, we all take pride in our town’s appearance! On the surface it seems that this is a very simple game, but the choices you make really matter: early game it’s best to keep your scoring options open; later, as spaces fill up, looking for the best scoring opportunities becomes crucial.

I stumbled across Mini Town by chance, it was mentioned in Table Top Gaming magazine and sparked my curiosity. Being new to the world of roll and write games, I liked the simple mechanic and definitely thought it would come in handy at school, this proved to be prophetic. When my school’s Y6 team were looking for some fun activities as the year was drawing to a close,  I suggested Mini Town as a whole class activity, which I would lead.

Once the rules were explained and everyone was ready, the first dice roll took place. There was some initial hesitancy from some children, but their neighbours quickly offered help and advice. As the game progressed, the classroom soon became filled with conversations as options for resource placement were discussed. There were plenty of good natured laughs as children became blocked or a cunning plan to score huge points was thwarted by the dice gods..

Despite having thirty children playing the same roll, the maps produced were all different and there was single winner. The game proved popular and was played several more times that year, by smaller groups and some who played solo, which this game lends itself to very well.

I have no hesitation in recommending Mini Town, which may them lead you down the Dark Imp rabbit hole to their other excellent roll and writes such as Palatial, Beach Life and Castaway.

Go on, dip a toe in, you won’t be disappointed.