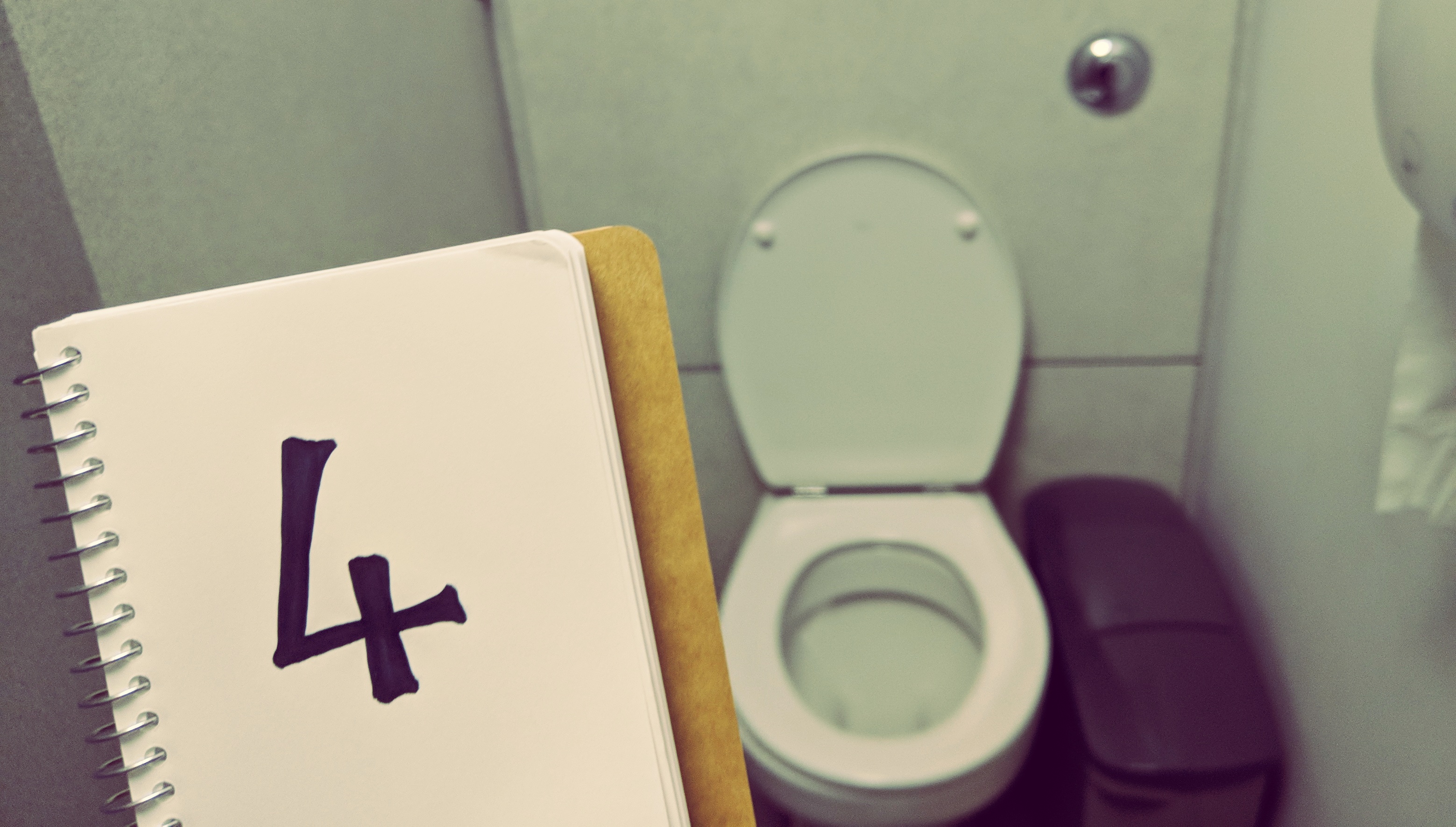 I have a 6-point toilet grading system. There. I’ve said it.

Every toilet I visit is awarded a grade or ‘ToG’. I don’t actually make a note of the grade. There is no toilet notebook squirrelled away in my bag. But I’ve thought about it. I’ve thought about taking photos and writing a blog. Maybe even turning it into a book… ‘Great toilets I have known’. But these things haven’t happened. Yet.

Here’s how the Toilet Grading System (ToGS) works. There is a six point system check that determines the eventual tog.

A solid ‘Yes’ to each of these answers will elicit a full point. An absolute ‘No’ will give no points in that category. When the answer is somewhat shaky, fractions may come into play. If the bowl isn’t blocked, but needs a flush. If there is a bit of paper, but not a generous amount; if the lock can be wiggled to work, but isn’t functioning well.  It is also possible to score negative points on point 5 – if the cubicle is absolutely filthy. Though, to be fair, you are unlikely to spend long enough in that cubicle to grade it. To be clear, we are just grading the cubicle, not the hand-washing facilities.  Most toilets in public places will score somewhere between 1 and 5. Toilets that score 4.5, will be awarded a Tog 4.5 Status. But there is a chance for a loo to be graded the maximum Tog 7.

Point 6 is where some bonus points can be picked up. Point 6 asks, “Is there anything special about this toilet?”  A bouquet of flowers on the windowsill, a funny poster on the back of the door, some relaxing music being piped through the wall… these may bump the tog up one level. Only the very best toilets will achieve Tog 7.  Point 6 can also reduce the grade. If the sanitary bin cuts into your thigh or the cubicle is so small that you have to do an acrobatic manoeuvre to close the door, a point is lost.

I realise you may be less interested in the intricacies of ToGS and more concerned by why I might be doing this. Well, it is more fun than checking my phone and it keeps me amused.  That’s it. I like rating things. I like categorising things. It gives me pleasure, so I look for opportunities to do this. I’m not alone.

On the podcast Freakonomics Emily O’Mara was interviewed about her quest to find the best cheeseburger and fries in Louisville Kentucky. She called it the Cheeseburger Diet.  She was systematic, visiting two different restaurants a week to eat the same meal for a year. She created her own grading system with a maximum of one hundred points.  Twenty-five points were allocated for the taste of the cheeseburger, twenty-five for the fries, twenty-five for price, fifteen for ambiance and ten for service. The winner – the Dizzy Whizz cheeseburger – scored 98 points.

Like many websites, Board Game Geek allows users to review games and give them star ratings. One user (Cerberus777) shared his own rating system, which he applies to games to determine the rating he should give on BGG.  There are sixteen categories that contribute to his rating, with ‘fun’ given the greatest weighting. Points are also given for game flow, downtime, game play, mechanics, theme, scalability, randomness, replayability, portability, aesthetics, components, value, set-up time, game length and complexity of rules. Nice work, that board gamer.

Invent your own family grading or scoring systems as a talking point within the family. Refine and develop the system as it is put into action. Decide how bonus points are awarded. Record your findings, if you wish. Amuse and delight outsiders with your cryptic discussions or proclamations of seemingly random numbers. Establish a quirk of the family – something that no other family does. A families quirks strengthen the family brand and the sense of belonging. But beware, there is a fine line between being interestingly quirky and just plain embarrassingly weird though. If I were to announce the grade of the toilet loudly to other diners in a restaurant, I may be cast out of the family.