This week I’ve pulled out Throw Down Your Coats to run some individual playtesting on version 5. I ran a two-player game through, while making a (long) list of rule clarifications and issues that needed modification. When you are solo playtesting, it is easy to change rules, throw out components and tweak phase order, so the game is refined during game play.

In Throw Down Your Coats, players play a nobleman who will only move around the land by walking on the coats of his followers. The noblemen must get the followers to plant crops, dig wells and raise cattle to feed the people. Surplus production gains him influence. Influence brings more followers. From time to time inspections occur to make sure no noblemen are poorly treating their followers. During playtesting it became clear that the distribution of inspection cards needed to be altered. Inspections force players to be producing enough food and water for the number of followers they are trying to support. I’d had problems with previous versions because inspections were clunky, too difficult to remember to do, or too frequent. Version 5 has random inspections that come up on cards, which is much better, but the frequency and placement within the decks needed changing.

Some of the card actions were more useful than others. It also became clear that the ability to take a card to play the action later is powerful. There was one action – the ability to build diagonally – that had the blue player had this action and played it in the final turn –  would have totally changed the outcome of the game.

The game is much quicker than previous versions, which took a long time to get started. Players can move and build quickly and gain new followers within a handful of turns. Now I need some playtesters to help work out how long the playtime will be. 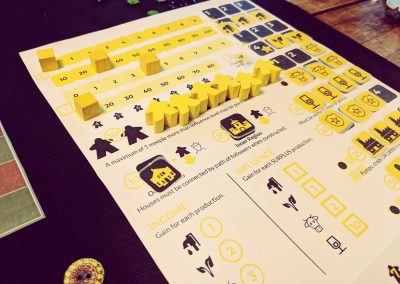 Throw Down Your Coats player board 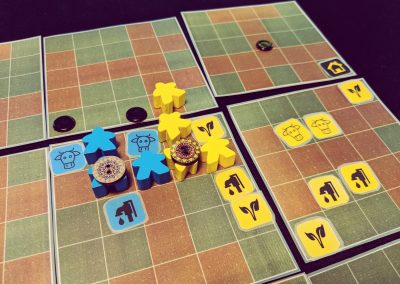 Early in the game 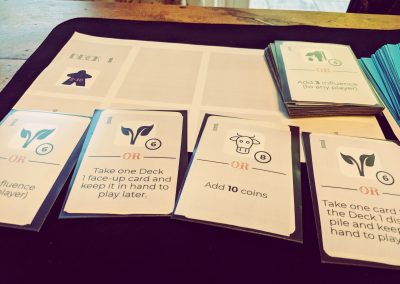 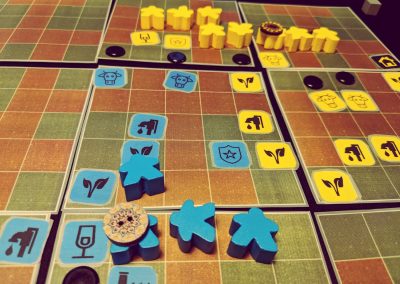 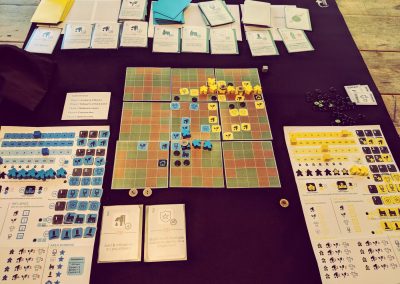 Throw Down Your Coats version 5 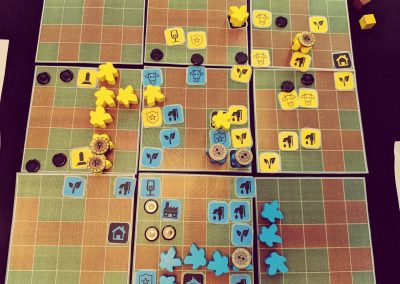