On Monday I was interviewed for the Sue Atkins podcast. Sue is a is an internationally recognised Parenting Expert, Broadcaster, Speaker and Author. She regularly appears on ITV’s “This Morning,” Sky News, Good Morning Britain, talkRADIO and The Jeremy Vine Show on BBC Radio 2. It was an honour to be asked to guest on Sue’s podcast.  We talked about how board games can help parents connect with their children, how to get started in board gaming, the benefits of board gaming on family life and what age you can start to play games with your children. The podcast will be live from Tuesday (15th October 2019) and will be available here.

The first Dark Imp coaster game – Letter Market – is hot off the press. This is the start of a series of games that can be played just using a coaster and a pen and paper. The game is on one side, the rules on the other. Letter Market looks lovely. I can’t wait to start handing the coasters out at events. I’ve also had a first glimpse of the punchboards and playing cards for Gnome Grown. The printer ran off a few copies so I could check the quality and make sure that the tiles pop out without causing damage. They are fabulous. Can’t wait to get my hands on the whole print run.

I had the opportunity to play Uranus! with a group of 6 playtesters with Playtest UK on Friday. Uranus! is a co-operative game in which each player is looking after one of the lesser known moons of Uranus. The moons are under attack by alien races and the people who inhabit each moon must make their escape to Uranus. But there are obstacles that need to be overcome before they can make the journey. They need to learn about rocket technology to send resources to Uranus, to make it habitable. They need to develop telescope technology in order to see the enemy and where they are going to attack. They need to mine resources from their moons to create networks and more hubs in order to ramp up production for the task ahead. It is certainly my most complex game, but when you’ve learned how to manage resources, it is pretty immersive. Action is simultaneous, so there is no waiting around. Everyone needs to escape to Uranus to get a win and neighbouring moons can help each other using their special abilities. I love it, but there is work to be done. At the moment, it feels as if you are always working towards things that will happen in future turns, rather than getting the satisfaction of being able to make quick decisions. I am also considering adding personal objectives and alternate scenarios that kick in according to which other moons are close by. Lots to think about.

This week there is a brand new game in its early design phase. The game, as yet unnamed, is an area-control game about rival mobs trying to take control of a city. Bases are constructed only on the mob’s own turf (own colour) but each mob is aiming to take majority control of streets – which all run through multiple mobs’ turf. Mobs can collect poker chips by building bases in certain spaces. When there is a challenge on turf, or where mobs have an equal number of bases on a street, they face off in a quick fire round of 3 Card Brag (a poker variant) to establish who wins authority. It’s early days and the game currently looks abstract (though quite pretty), but I want to make sure the mechanics work before I spend time making it look like a dark mob-controlled city.

Finally, my younger son, Bertie, has been a bit under the weather this week and has had to take some time off school. So I introduced him to my roll & write about disease taking over domains in feudal times – The Pestilence. He loved it, though was cross whenever his population declined due to disease. He came up with loads of brilliant suggestions, most of which have been implemented during the week – to tweak and tighten the design. I might have a budding game designer on my hands! 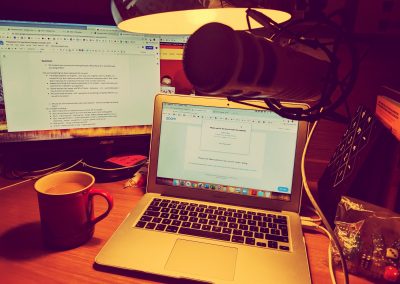 Setting up for the Sue Atkins Podcast 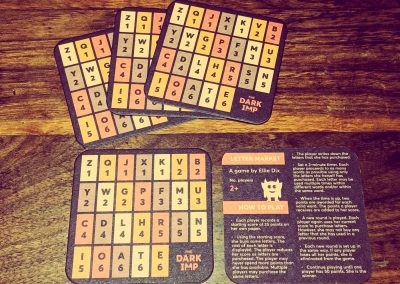 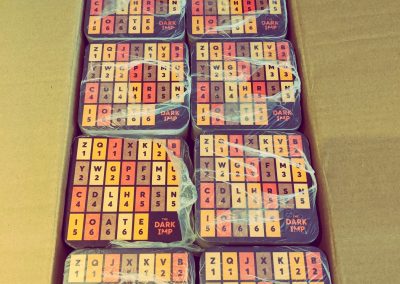 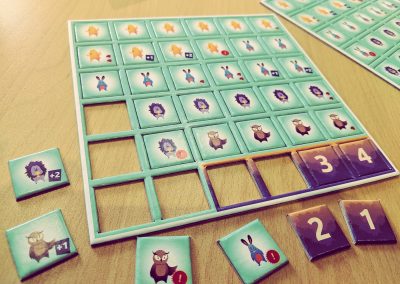 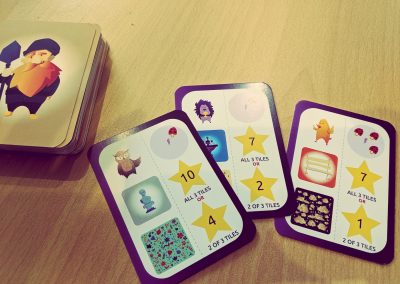 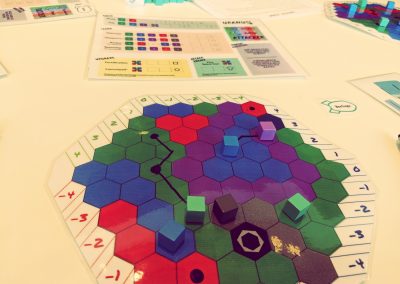 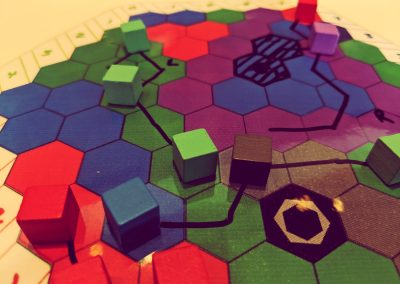 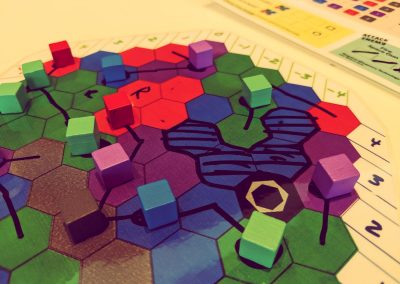 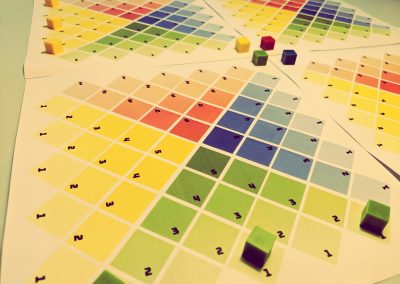 Set up for the mob game 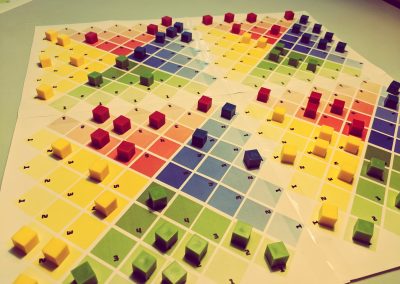 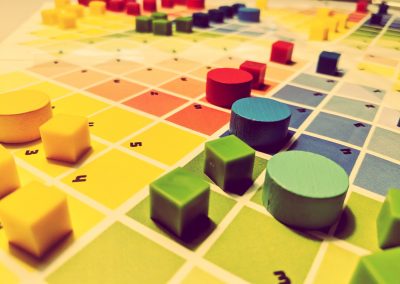 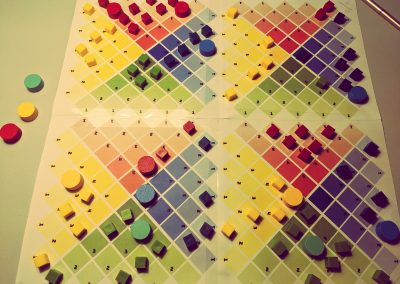 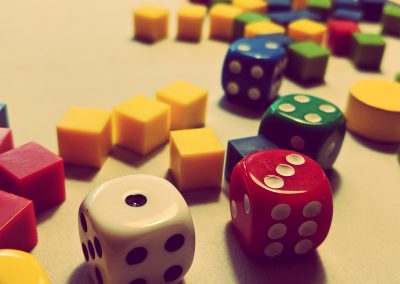 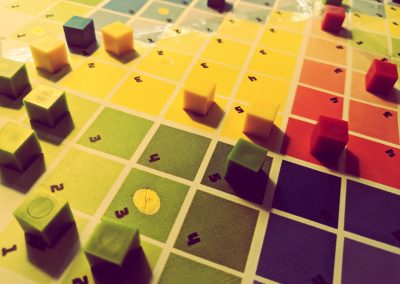 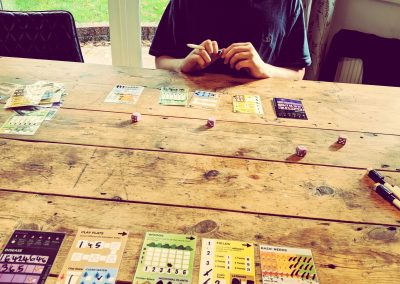 Testing The Pestilence with Bertie 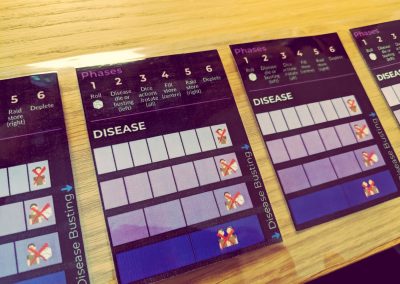 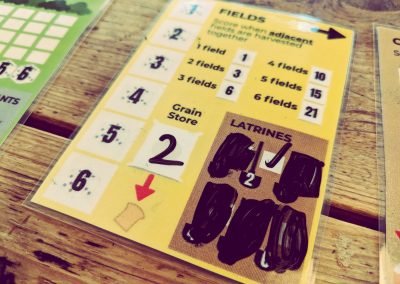 I’ve nearly used all my latrines! 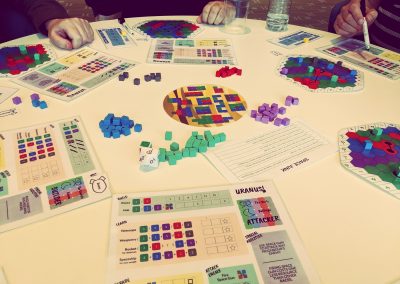