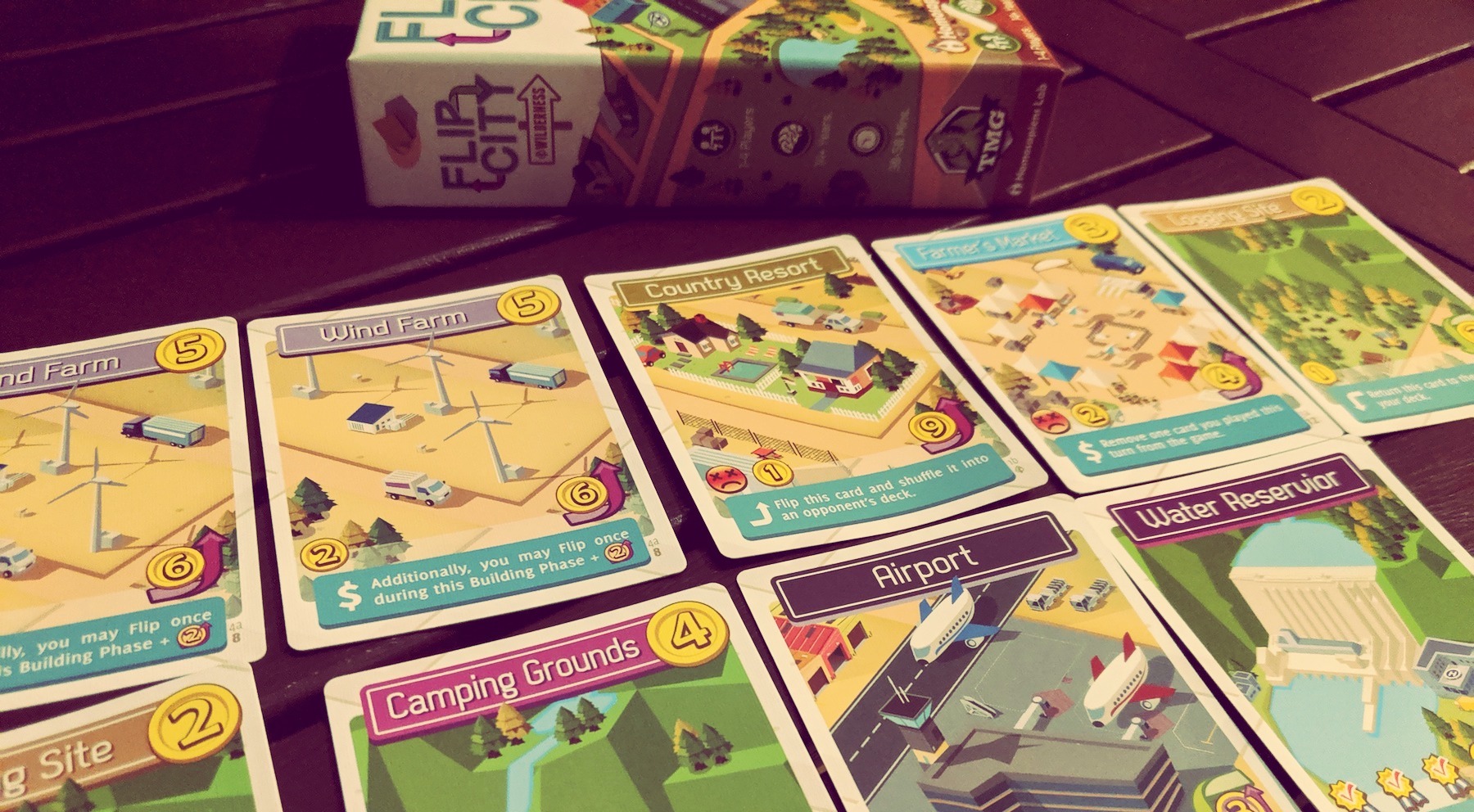 Deck building games have always been a family favourite. From classics like Dominion to popular trading card games such as Magic: the Gathering we’ve tried a lot. The goal of this deck builder is to create the perfect city for your residents without making them too angry. You do this by upgrading your buildings and purchasing monuments that they will appreciate. On your turn, you put cards from the top of your deck into play one at a time. Then you can purchase new cards or upgrade existing ones using the money shown cards played. The more cards you reveal, the more money you will likely receive… but you will also be in danger of enraging the citizens and having to skip your turn. Watch a video of how to play here.

Flip City has a multitude of positives, not least that it has a one player variant, and it’s not half bad. The main problem with introducing a one player variant in deck building games is that there is either no longer a way to win (as the conditions for victory revolve around beating your opponent, as in Star Realms) or the lack of player interaction reduces the enjoyment you get from playing. However, this is not a problem in Flip City and its single player variant allows you to test out a number of different strategies while still racing to win the game.

Another huge draw to this game is its price tag, at under £20, this game is cheaper than many of its competitors; and it’s compact, so very portable. If those factors haven’t convinced you to rush online and make the world’s greatest impulse purchase, then let me talk about the final defining factor that makes this game a must have… Games that rely on luck get a bad press. Terrible luck can ruin some of these weaker games. But Flip City uses a ‘push your luck’ mechanism which provides multiple decision points on each turn. It is also possible to reduce the amount of luck required to be successful and to increase your control over the game.

One downside is that there isn’t a great amount of variety from game to game. There aren’t many card types, so after several plays of employing the same strategies, you’ll be ready to put it on the shelf, whereas other deck builders with more cards have a longer lifespan. Expansions are available, but that increases the cost.

Of course, that’s only a problem if you want to play lots of times. Flip City is a great game and would definitely recommend this for anyone looking for a solid introduction into deckbuilders.

Flip City is also featured in: