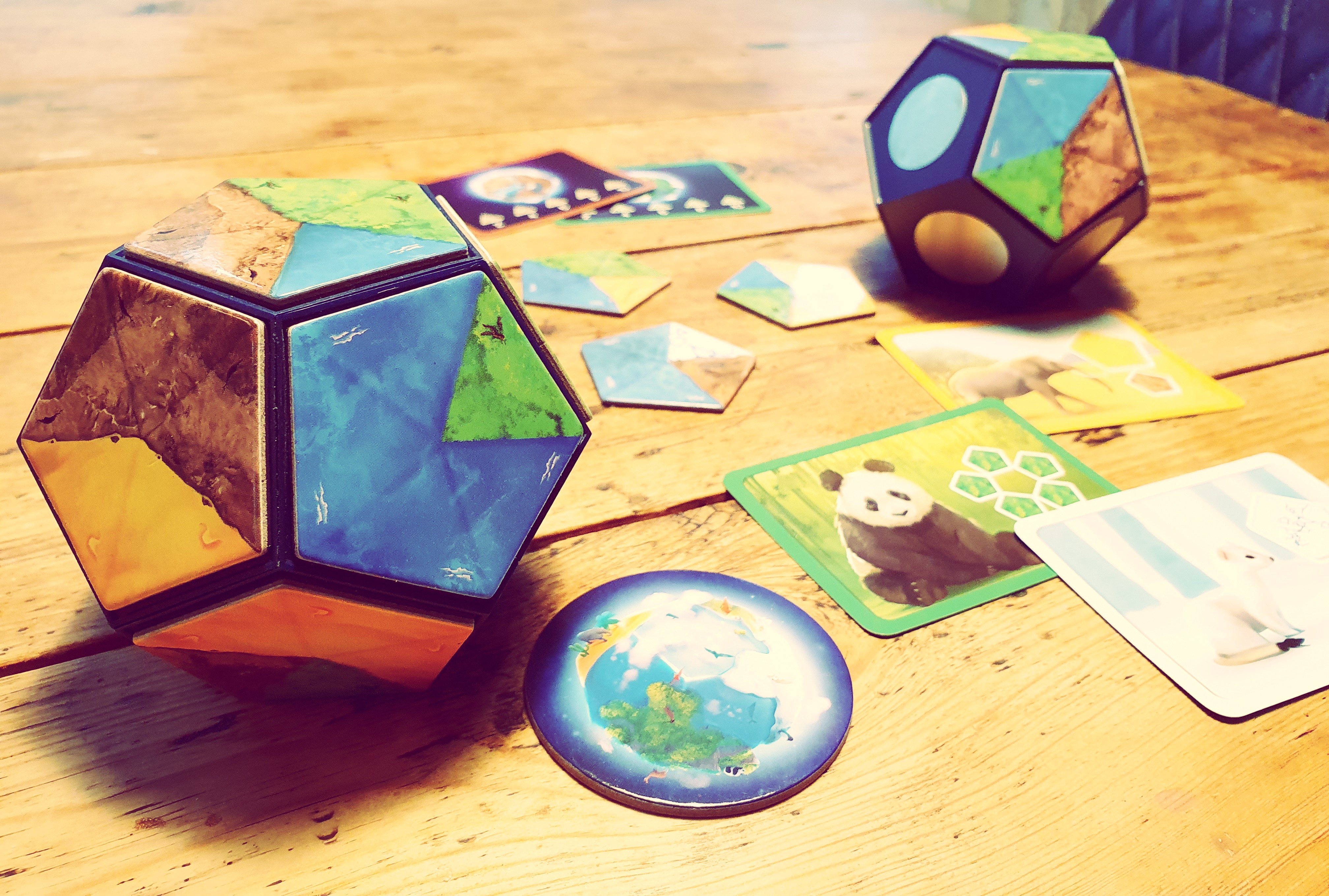 Alfie Dix, 17, reviews board games that he plays with the family and subsequently with groups of friends. Here’s his review of Planet.

Bringing three-dimensional gameplay to another level we have Planet, a game based around drafting tiles to make the best habitats for wild animals, one tile at a time. This game revolves around magnetically plated dodecahedrons that each player receives at the start of the game – the planets. Over 12 rounds of drafting, players cover their planets in a number of terrain tiles, crafting their worlds into areas suitable for animals of the known world. Players are competing to win animals for their planet. Each animal has its own requirements, which forces players to challenge others for supremacy in different habitat configurations, such as the largest area of ocean or the biggest desert connected to grassland.

There are certain animals up for grabs at the end of each round. These are all laid out right at the start of the game, so you can always see what you’re working towards and where the points can be found.

The tiles are pentagonal, each with five different sections containing terrain types…desert, swamp, grassland, glacier, or ocean. Each tile has these terrains in different combinations and configurations. Each player also gets a personal goal card, providing bonus points for a certain type of landscape, enabling the player to gain more points for winning animals from other habitats.

This game is easy to understand, but surprisingly difficult to play well even for returning players. The challenge is largely due to the fact that you cannot view your whole planet at once, and hence it is tricky to plan and visualise. It’s even harder to keep track of other players’ planets. In the rules it states that you may look at another players planet at any time, though it’s really hard to retain information because you can’t see the whole picture at a glance. While the animal cards are face up for the whole game, the available tiles are revealed turn by turn, which is a relief, anything else would be information overload.

My main draw to this game is the uniqueness of the 3-dimensional game-board and all of the interesting aspects this brings along with it. It brings a new type of puzzle, which is a great experience. The game is well-balanced and there are variations in the rulebook to explore.

However, I think the designers have missed a trick. I’d love the game to have a more fantasy theme, with players creating planets with unusual terrain types and strange creatures. I think this would allow players to really feel like they are creating their own planet rather than simply remodelling the Earth. That being said, I love the game’s artistic style. The box art is beautiful and the cards are high quality. Fingers crossed for a fantasy-themed expansion.

This game is a great find and while it may take some time to get your head around, the final result is definitely worth it. Whether you are a family looking for something different, or a fan of spatial awareness type games, this should definitely be on your watch list.

Planet also features in our article on Recommended board games for different key stages.