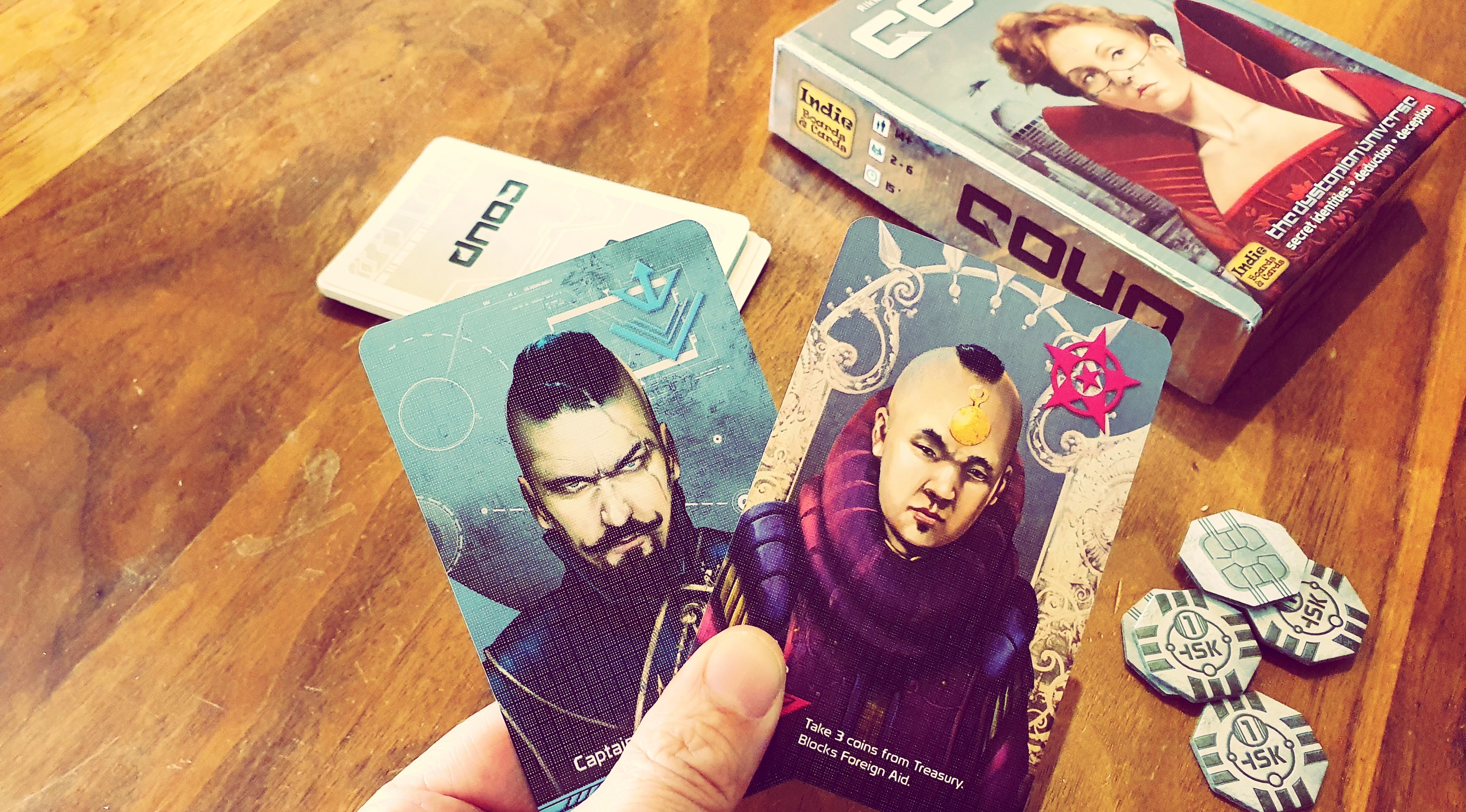 Alfie Dix, 18, reviews board games that he plays with the family and subsequently with groups of friends. Here’s his review of Coup.

Deception runs amok in the world of Coup and a thin line separates you from the average citizen. Unacceptable! As the head of your family YOU MUST retain your influence in this futuristic world and reach the pinnacle of society. Tactical lying is the name of the game, so get your poker face on, it’s time to put your reputation on the line and fake it till you make it.

Five characters stand between you and your goal, these are the Captain, Contessa, Ambassador, Assassin and Duke, each with their own specific attributes. You start with two cards and two coins in front of you and play proceeds with each person taking one action per turn. On your turn you may take one of the basic actions or use an action of any character (regardless of whether you hold that character card or not). However any person may challenge or block you, claiming that you don’t have the required character or that they have a specific oppositional character. A challenged player must either reveal the character they claimed to have and swap it for a new secret character, or be caught out for lying and lose their character as a punishment. Players get eliminated when they lose both characters and the last one standing is declared the victor.

For a surprisingly simple game the number of strategies is vast. Some choose to prioritise honesty, aiming to never lose a challenge, while other cover their opponents in lies to bait them into making a false move. The depth of thought is amazing and even links well into the flavour of the game. You could make the choice to be pacifist and not challenge opposing families to remain as safe as possible. But, this may lead to them going out of control and taking you out. But beware, be too aggressive and you could find yourself the target of others, and even fall to false accusations in the process.

My main concern I have with the game is the player elimination, a mechanic I really dislike, when players get eliminated at different times throughout the game. This leads to players waiting around for people to finish while others continue playing. This effect is also further magnified in the fact that experience is a catalyst for success for games like these, particularly when you regularly play with the same people. Due to this, the players who are worse at the game, may continue to lose and will ultimately have less experience than those who are winning and getting progressively better at the game. Luckily, this effect is minimised here as the games are rather short for 3 or 4 players, however for 5-6 players this time is much greater, and you could be waiting a lot longer.

Whether you plan on deducing your opponent’s greatest secrets or psychoanalysing their behaviour for traces of deceit, it certainly helps that the game comes with an affordable price tag, high quality components and travel sized box to match. If you play the game often, you may want to consider upgrading the coins to metal ones.

While the player elimination is annoying, the rest of the game and all its mechanics are thoroughly enjoyable, and I recommend this highly to all families looking for a quick deception game. So, bring out your monocle, this game is worth your best detective work.