UK Games Expo is the biggest annual board games convention in the UK. In 2020 it didn’t happen, obviously. But – to great applause – last weekend UKGE 2021 took place at the NEC in Birmingham. I spent all three days at the convention along with my two teenage boys.

The event was much smaller than normal, with less than half of the number of exhibitors and significantly fewer visitors. This had its pros and cons.

On the positive side, it was much easier to see everything on offer, much clearer and easier to move around (making the whole environment more pleasant) and much to sit down and play the games you wanted to play.

On the negative side, there weren’t as many games that I wanted to play. But to be honest, this was totally out-weighed by the fact I could meet up with friends, sit down, have a chat, play a game and connect with people in actual real life. It was refreshing and very much needed. 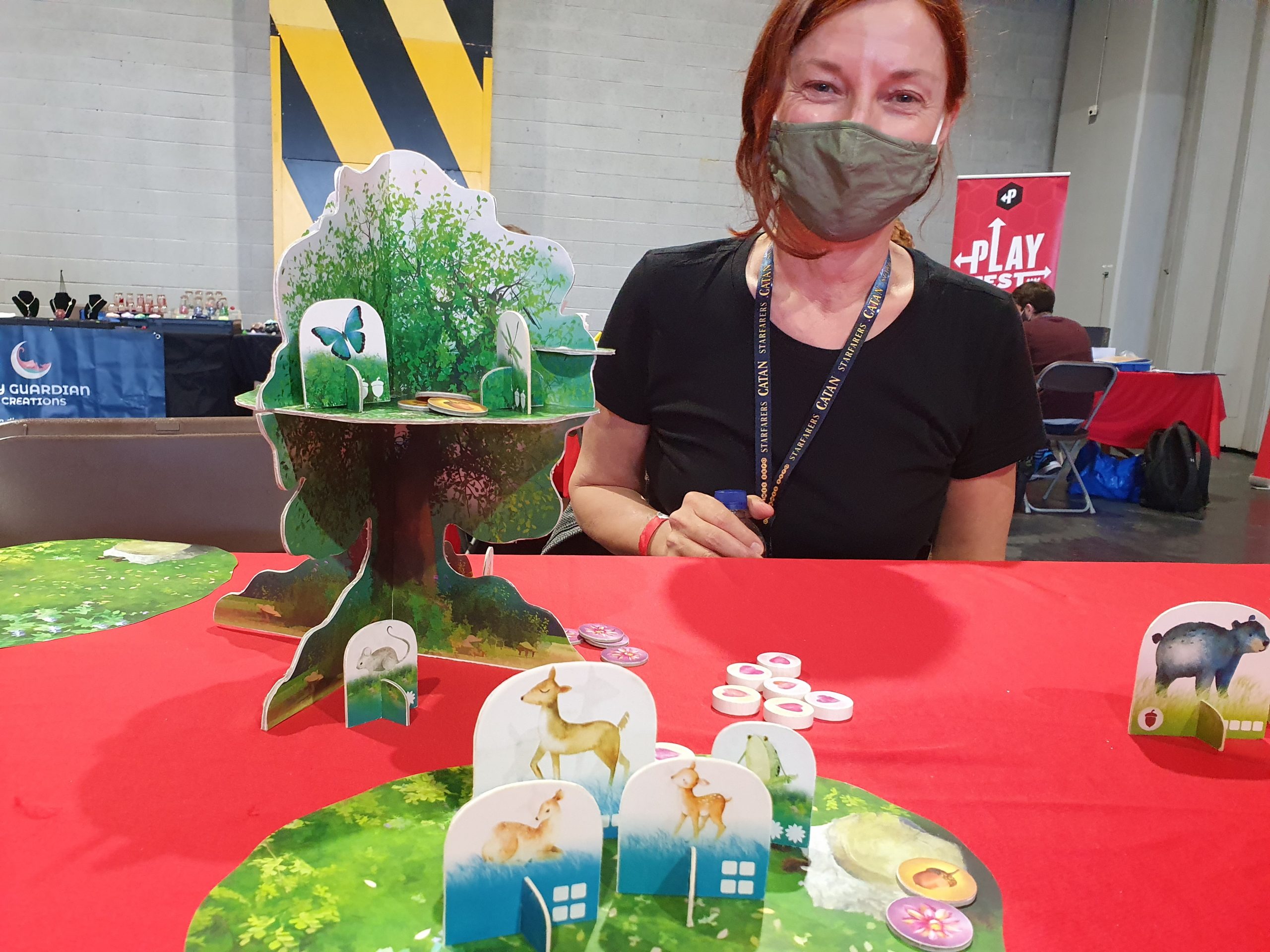 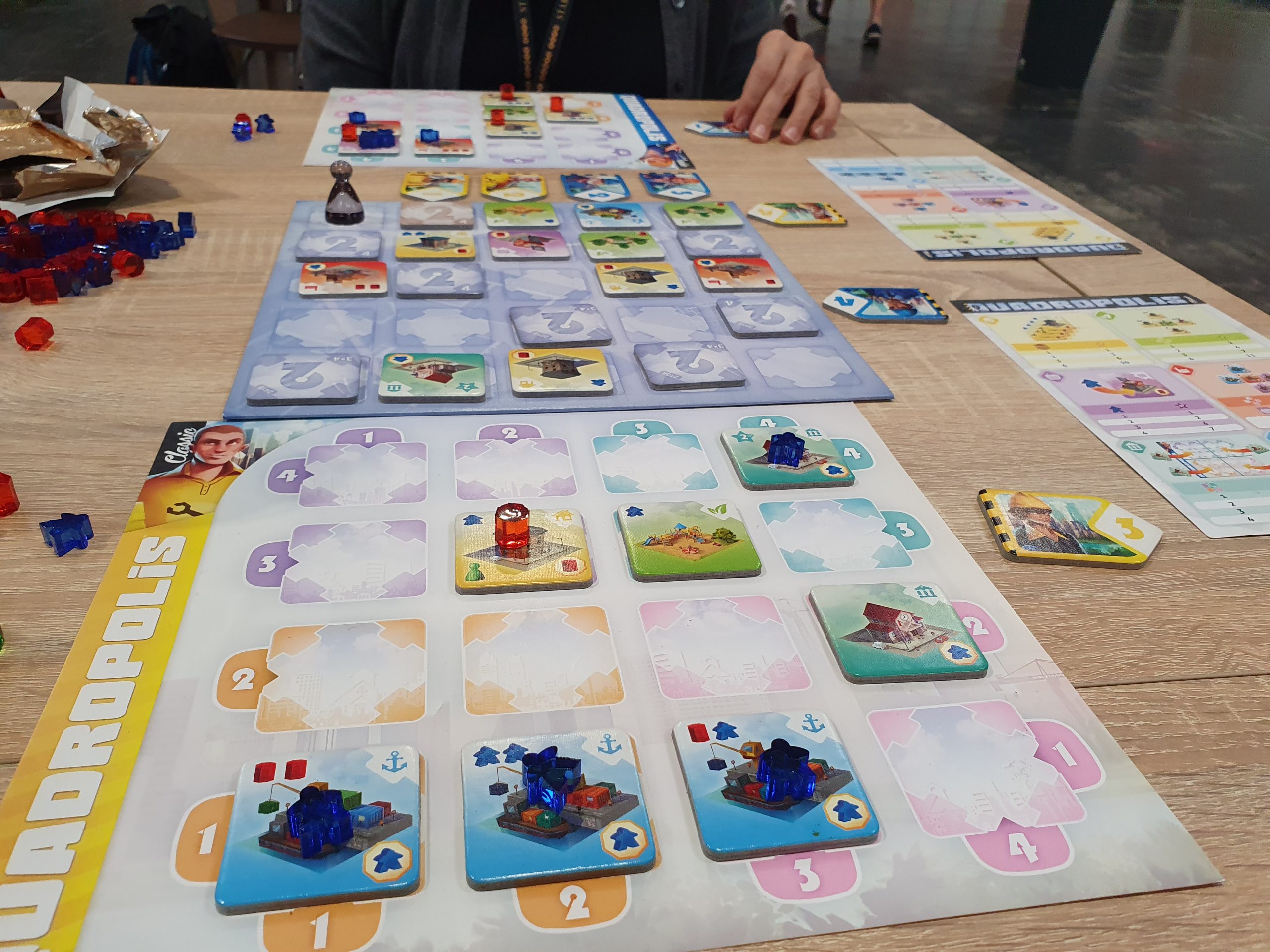 Covid restrictions were in place and very well organised. Everyone on site needed to show proof of double vaccination or negative lateral flow test. Masks were worn by everyone on site all the time, except when sitting at a table in the Open Gaming area.

Speaking of Open Gaming – the area was huge and the seating areas very well spread out so that each group of players was distanced from others. On Saturday morning I met Adam Richards from Punchboard to play a game of Architects of the West Kingdom – we were the first people in the Open Gaming Area. Look how huge and empty it was! 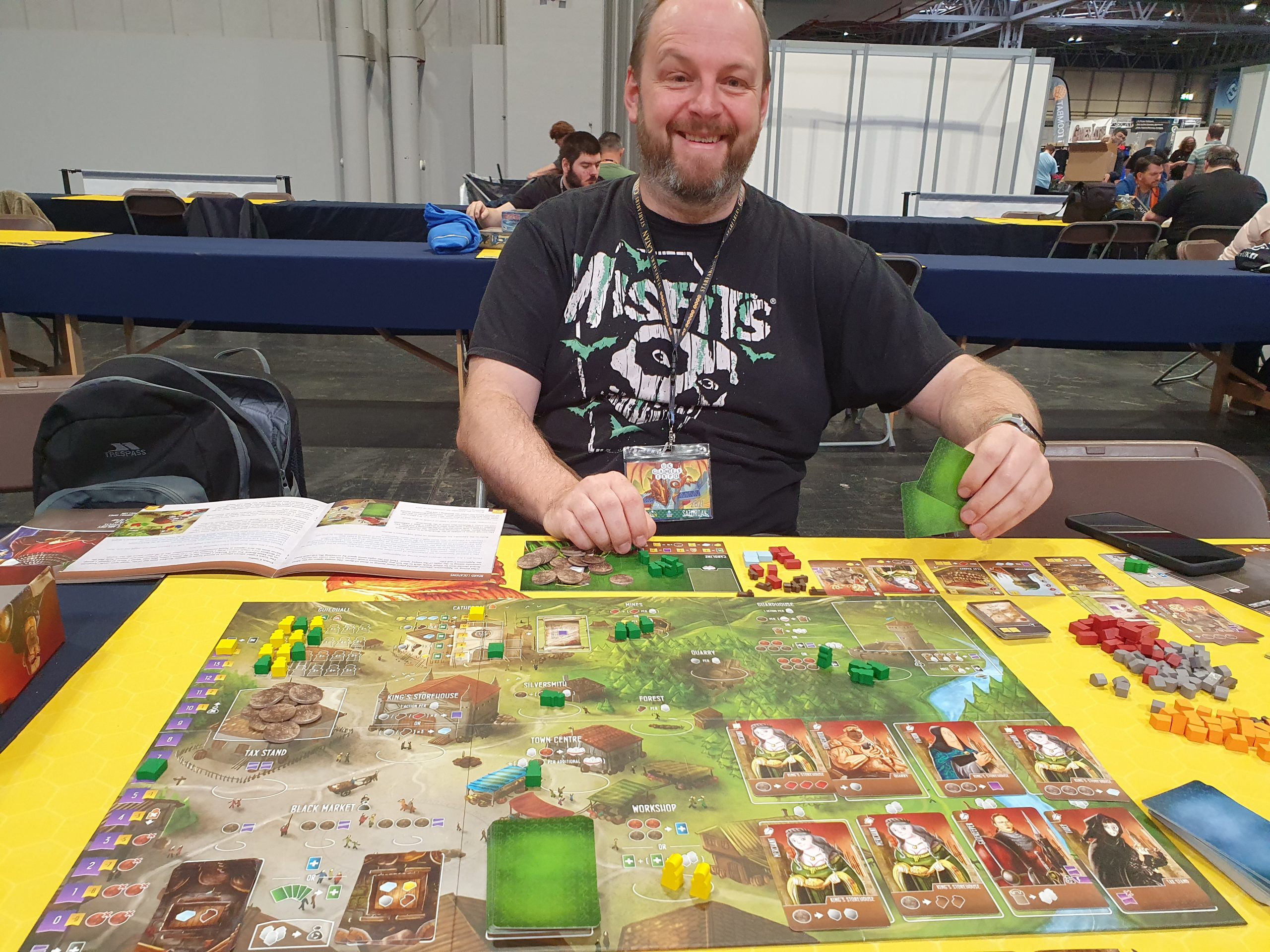 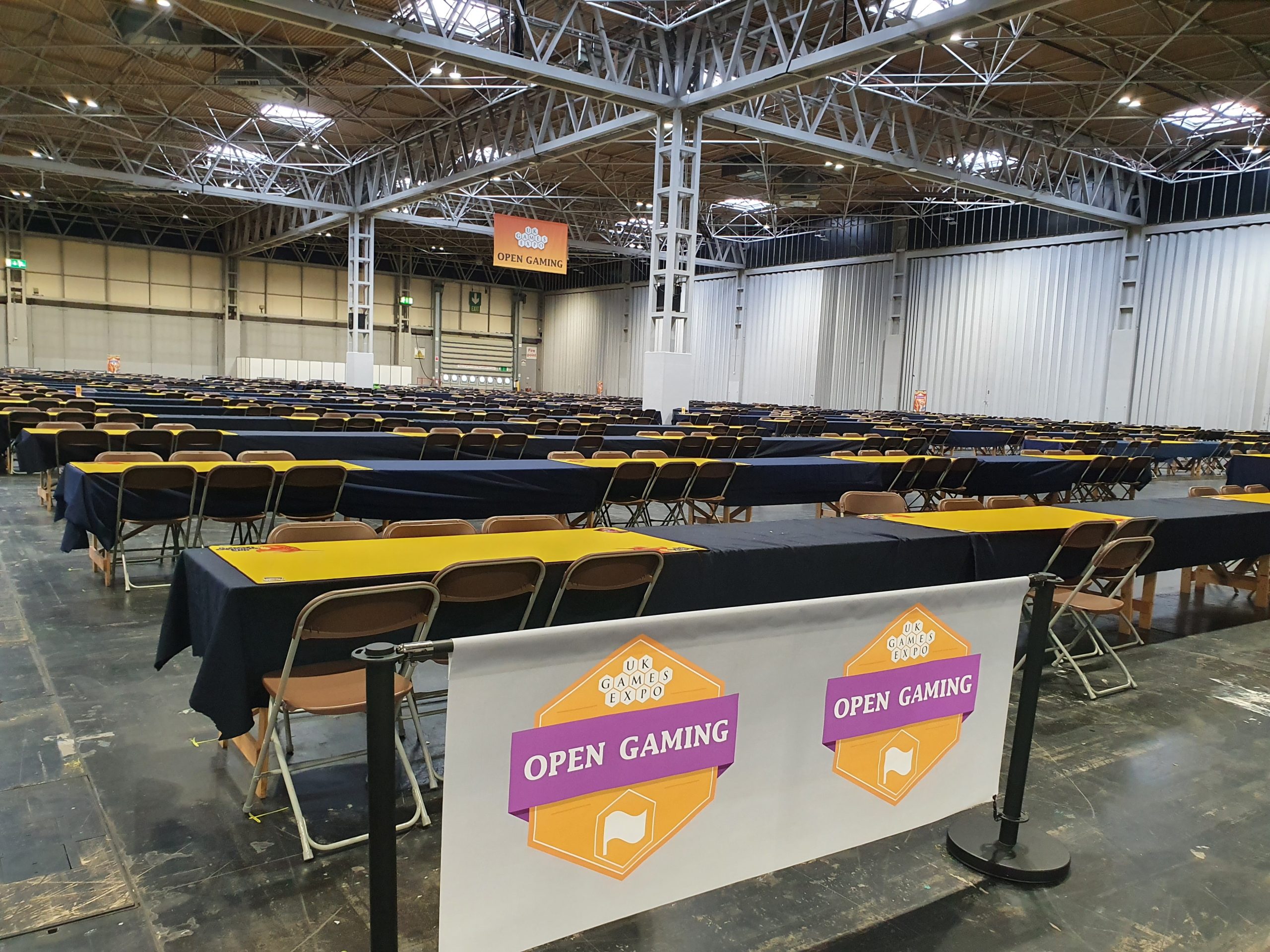 I spent a large amount of time in the Playtest UK zone. This is where game designers can test their prototype games (at various stages of development) with members of the board gaming community. At UKGE designers can book a 3-hour playtesting slot and (if your game isn’t too long), it’s amazing how rapidly you can iterate and test ideas in this timeframe. I took two of my own games with me – Throw Down Your Coats (formerly ‘Down Peasant’) and Bonza!

I wanted to test out the latest developments to Throw Down Your Coats (which resulted from feedback from the Cardboard Edison contest, in which it made the final) – the new action cards work really well. Now players can get unblocked and mess with their opponents in sneaky ways, which fits the game perfectly. 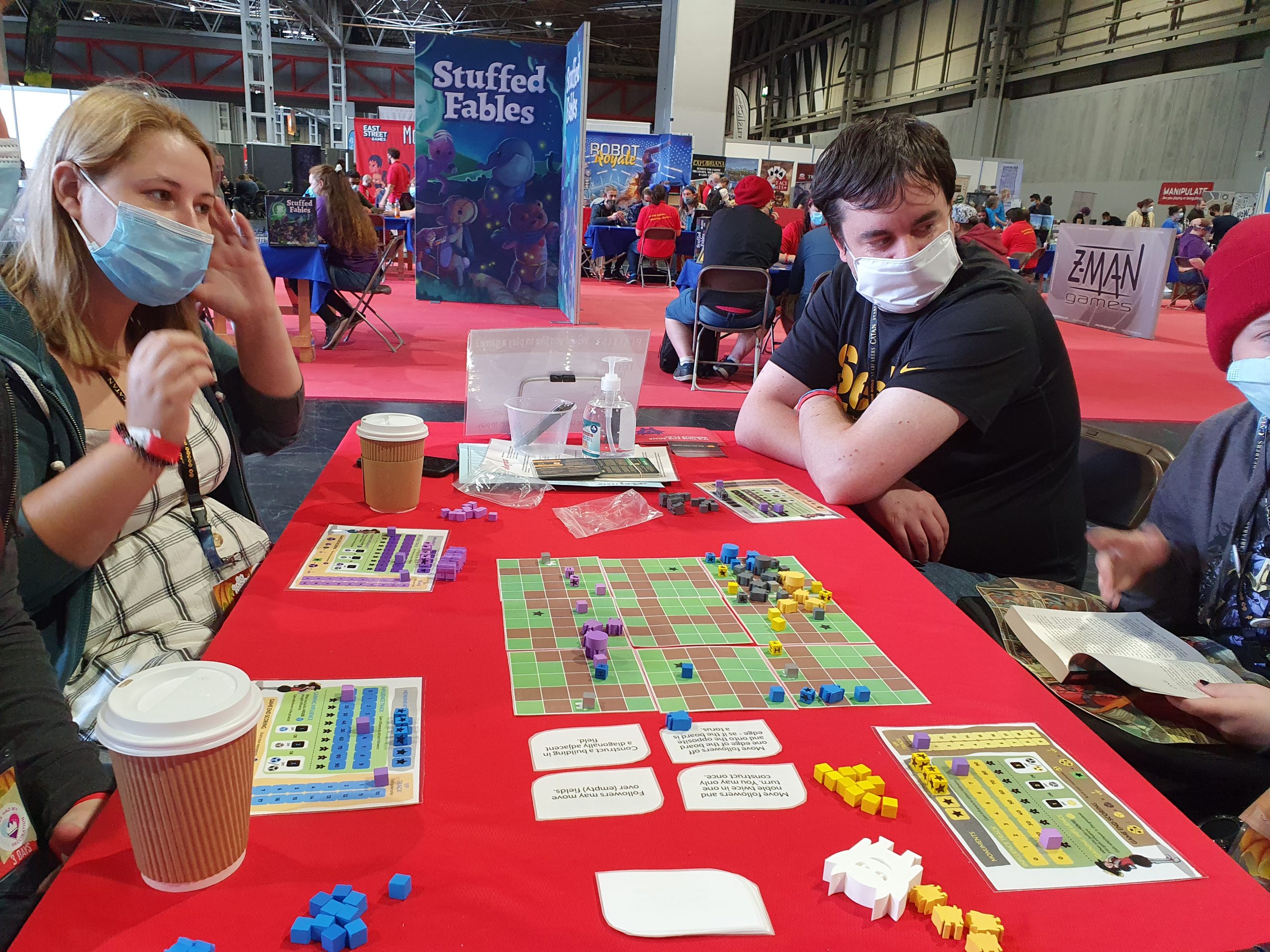 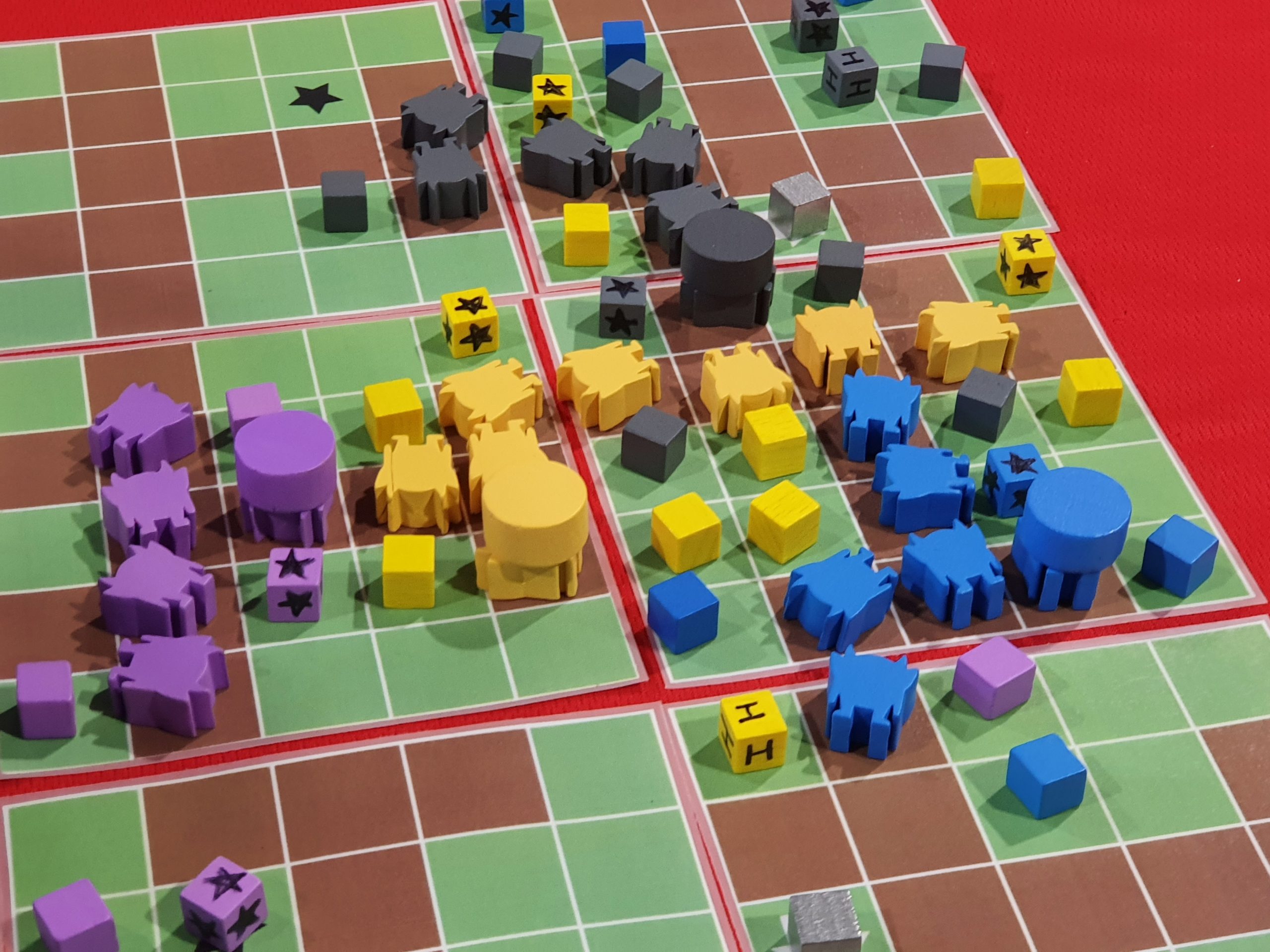 The other game – Bonza – was only conceived a couple of weeks ago and was at very early stages of development. In Bonza, each turn players play a die from their pool into a mini game on the table OR choose to score a mini game. There’s always a choice of mini games to play into and a choice of dice to play. When I took it to the Expo at the weekend, it had no theme and one of the mini games didn’t work at all. By the end of the weekend, it had a brilliant theme (old English fair), fully working mini games and some lovely tweaks that improve gameplay. Thanks to all the lovely playtesters. 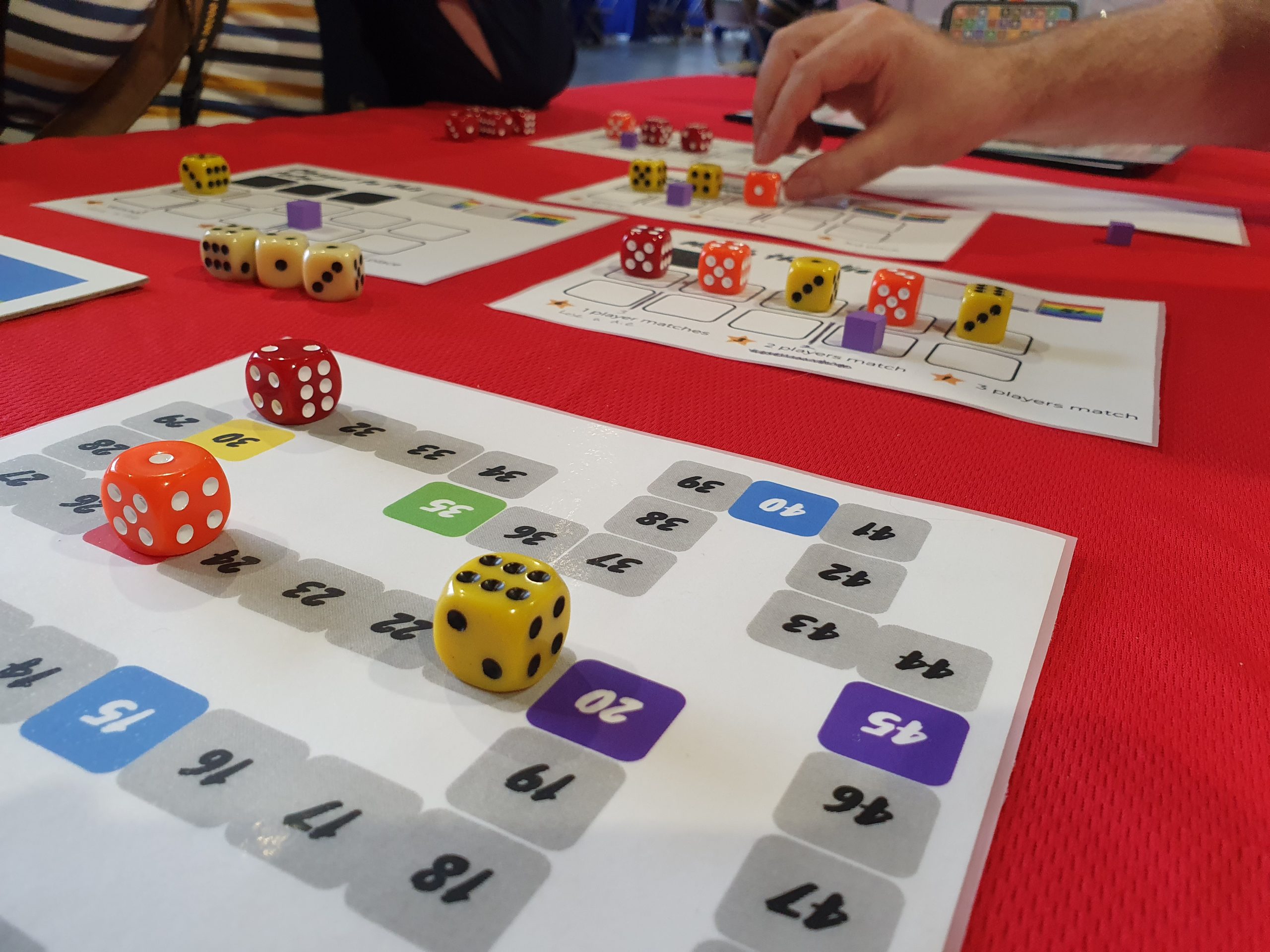 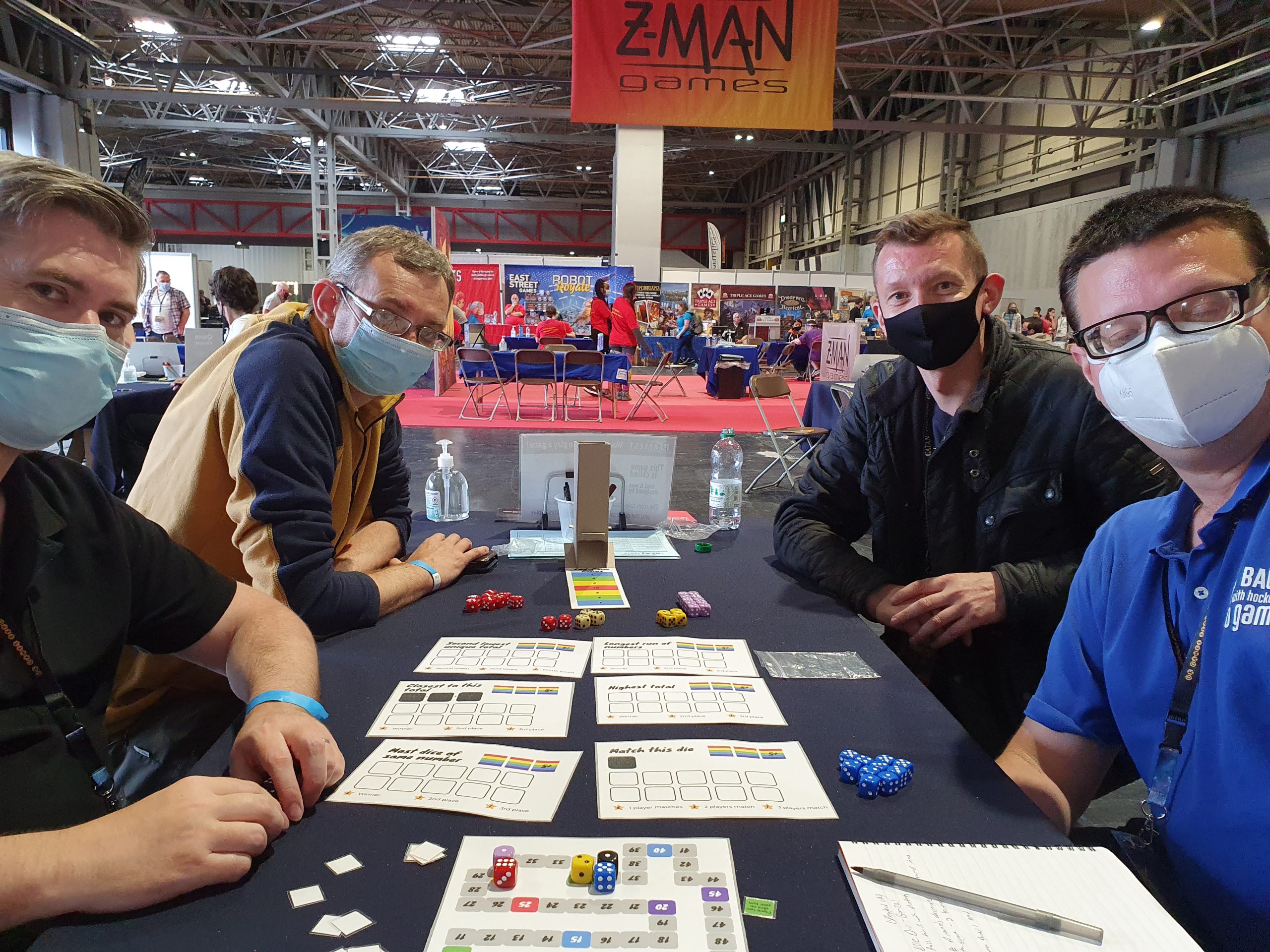 Among the brand new games I played was Star Fighters: Rapid Fire from Alley Cat Games. This real-time crazy dice-rolling game is packed with silly fun and is coming to Kickstarter soon.

The beautiful Mariposas is the latest game from Wingspan designer Elizabeth Hargrave. Players must migrate their butterflies across America, collecting sets of flowers, hatching to multiply and positioning themselves in scoring positions at the end of each season.

Another game that took my eye was The Great Fire of London 1666. A (neverending) fire is spreading from Pudding Lane and it is your job to protect your own houses, which are dotted around the city and your own secret areas. Fire is represented by tall red cones and as long as it has a direct path back to Pudding Lane, can spread with abandon. Players must aim to direct and control the fire to win points. 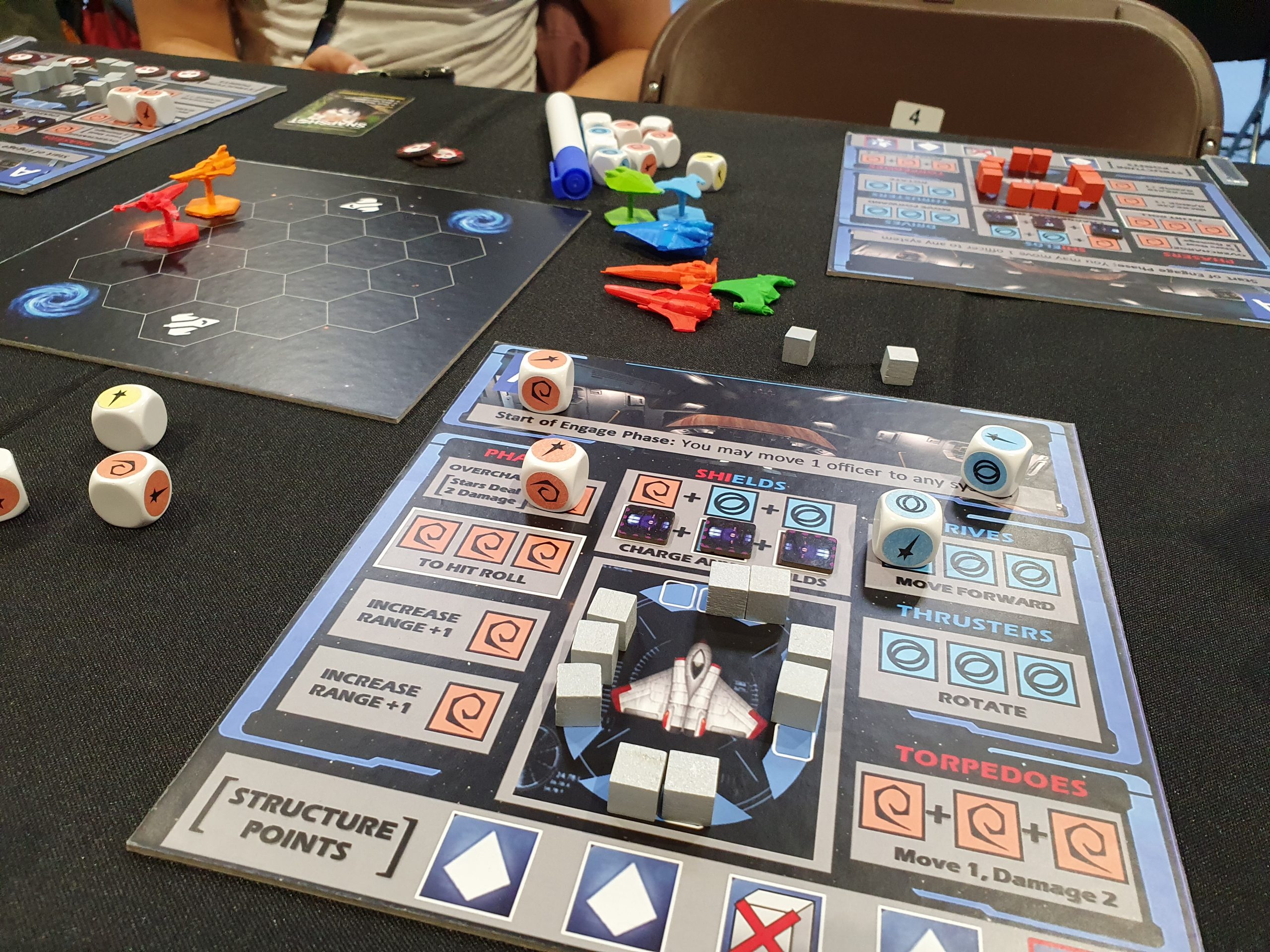 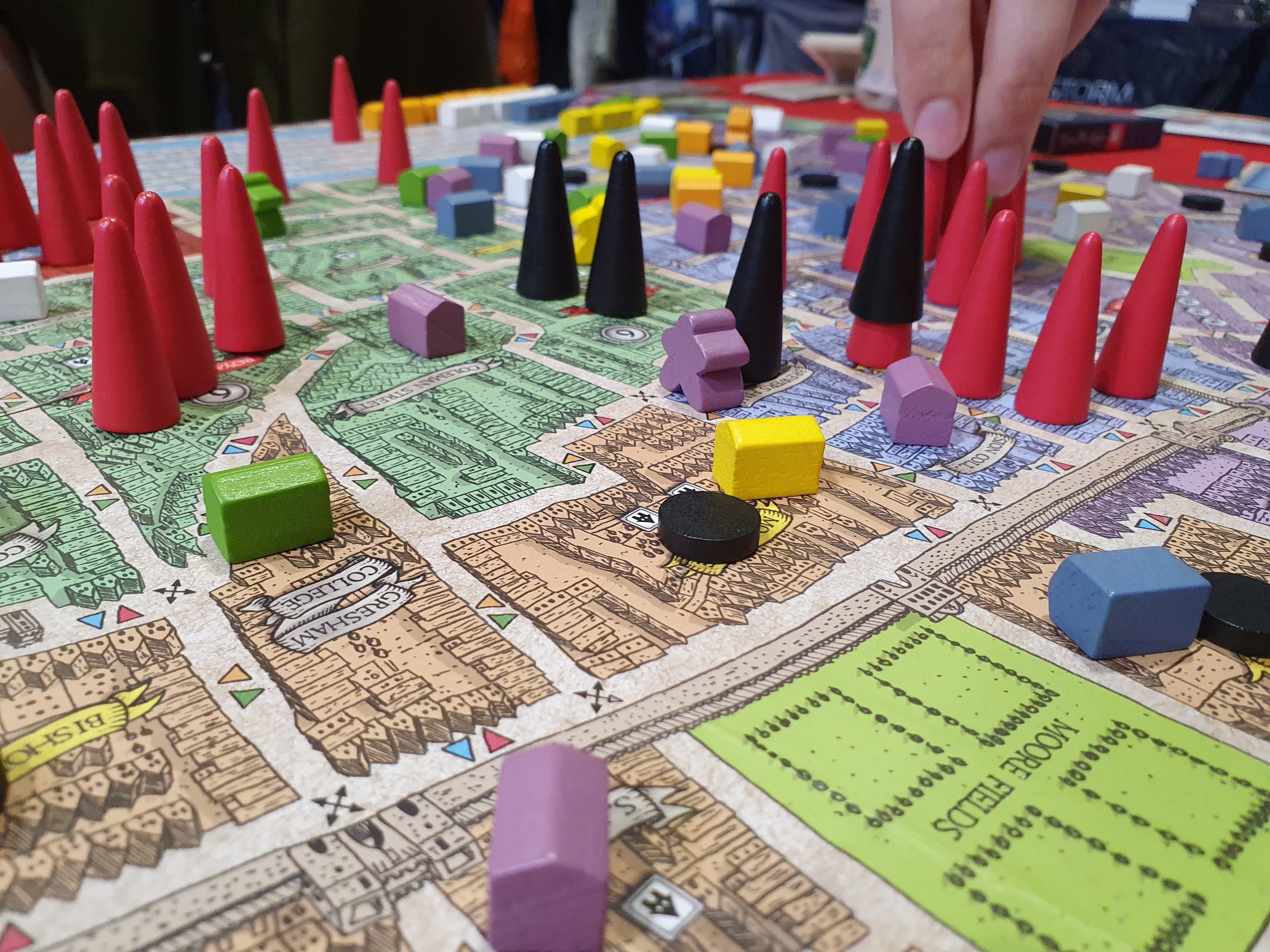 I barely saw my two boys as they were playing in tournaments, sleeping late and eating burgers all the time. But I did get to spend a couple of hours playing Keyforge with Bertie, who kept buying new decks and may be becoming slightly obsessed.

Fab weekend. Thanks to everyone that made it happen.

I can’t wait until next year! 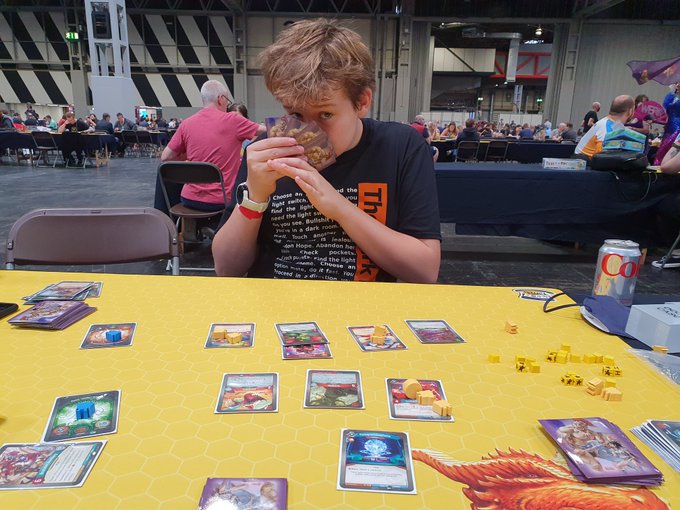