Each episode of The Game School (my show on Teacher Hug Radio), contains a game design challenge. Here’s a recent challenge for you to tackle.

In these mini game design challenges, the idea is that we make decisions quickly – we want to have the outline of a game in 10 minutes. Don’t ponder all the possible choices, just make a snap decision at each decision point and go with it.  At each point, you don’t need to have any idea about how your game will work, you’re just making one decision. The result of making a series of decisions will be the outline of a game. No special equipment is needed, we are just mapping out ideas. The aim is to get used to swift idea creation – to react to a stimulus and creative decisions. You can go on to create prototypes, playtest, refine and repeat if you wish, but the initial idea creation process is what we’re interested in here.

Today’s challenge is to make a symmetrical game asymmetric.

As a quick aside, there are plenty of games where the first player has an advantage – because they get first pick of the available resources or actions. In these games, it is common for other players to be given extra resources at the start of the game to balance out the first player advantage. This is a small tweak and doesn’t, in itself, create an asymmetric game. In fact, it’s designed to even out the differences between players and make them as negligible as possible. So let’s consider the differing starting resources you find in games where the first player advantage needs balancing – as the exception that proves the rule. 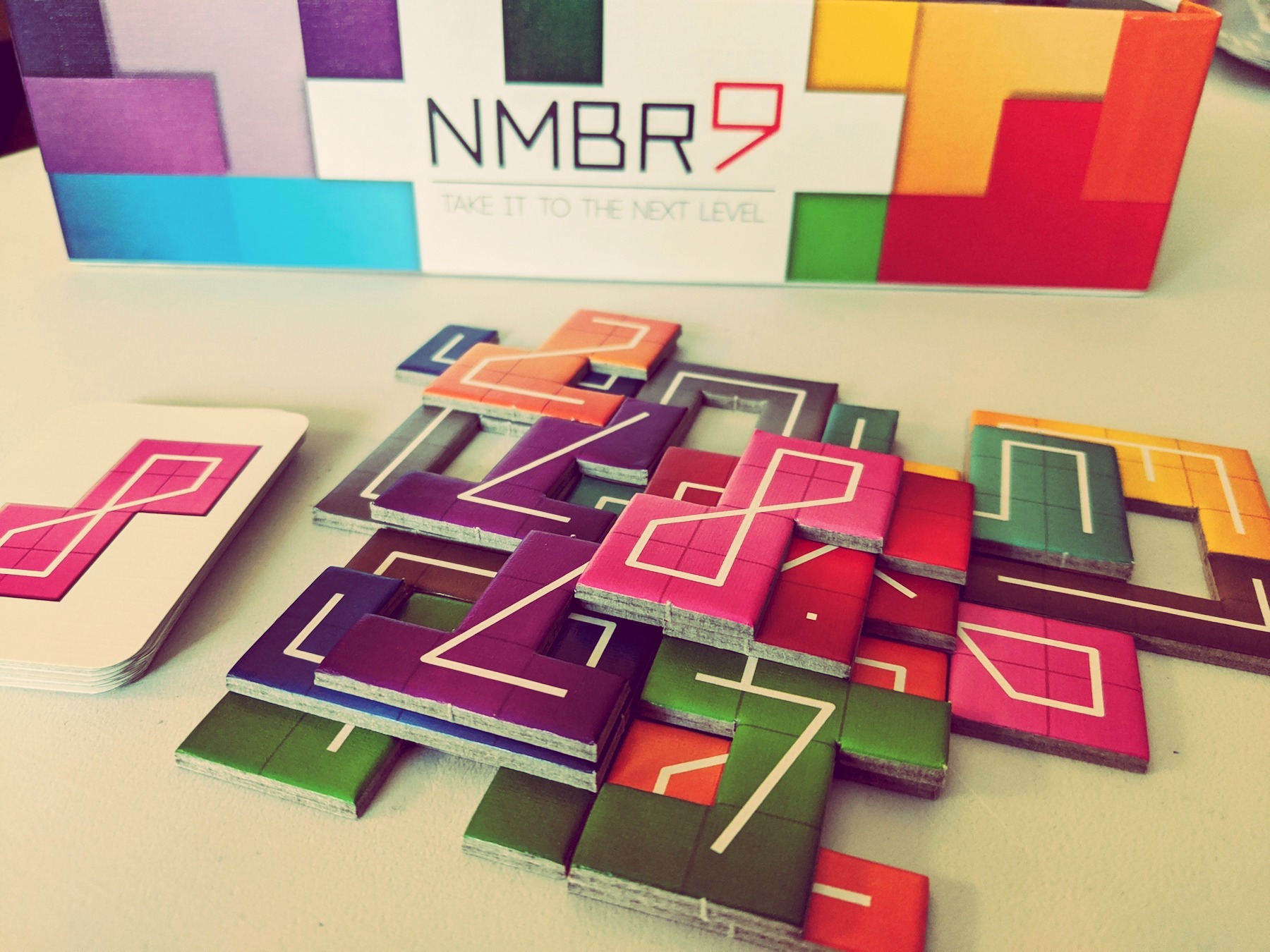 Nmbr 9 is a symmetric game.
All players have access to exactly the same tiles. 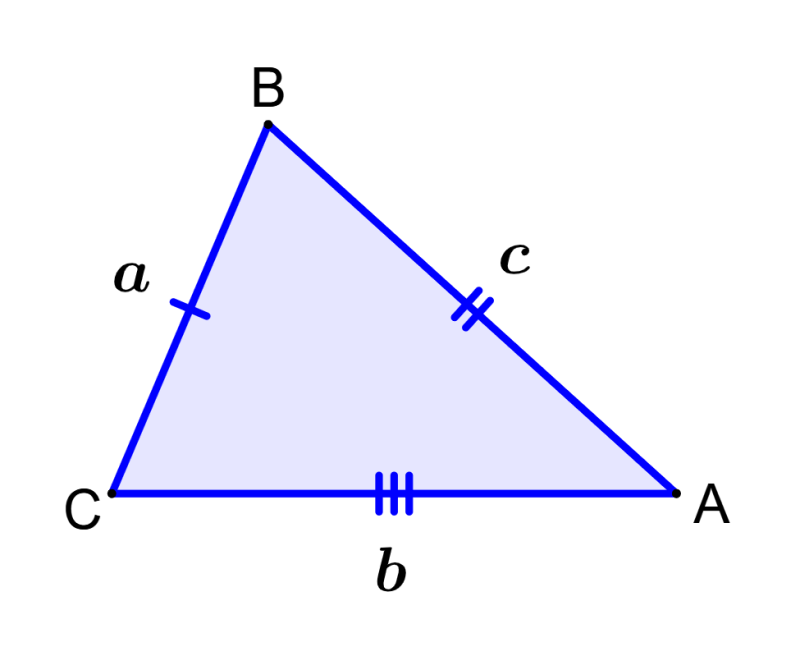 In maths, a scalene triangle is a triangle where all the sizes of all the angles and the lengths of all the sides are different. But it’s possible to draw a scalene triangle that looks almost like an equilateral triangle. Maybe one angle is 60 degrees, one is just over 60 degrees and another is just under. It’s asymmetric, but its asymmetry is not as pronounced as another triangle that has angles of 5, 121 and 54 degrees. So it goes with games.

A game may have pretty much the same options for all players, but with slightly different player powers. For example, one player could jump further when they take a ‘jump’ action, while another player could strike harder when they take an ‘attack’ action. Whereas in other games, absolutely everything may be different. In the game Root, which is a fairly complex area-control game, each of the players plays one of the woodland tribes that lives in the forest. Well actually – three players do – the fourth is a vagabond that roams the wood. The players have different numbers of pieces, different rules, different victory conditions, even different parts of the board that are accessible to them. They operate in completely different ways.

Now, it’s really really hard to make wildly asymmetric games – because so so much testing and tweaking is required to make sure that these different characters have an equal (or close to equal) chance of winning. So while you can go through this design challenge and flesh out an idea of a game that could have a totally different experience for every player, be warned that if you ever want to make this into a game, you’ll have quite a lot of work on your hands. So, for now, we’re going to concentrate on adapting a published game – a symmetric game – and making an asymmetric adaptation. 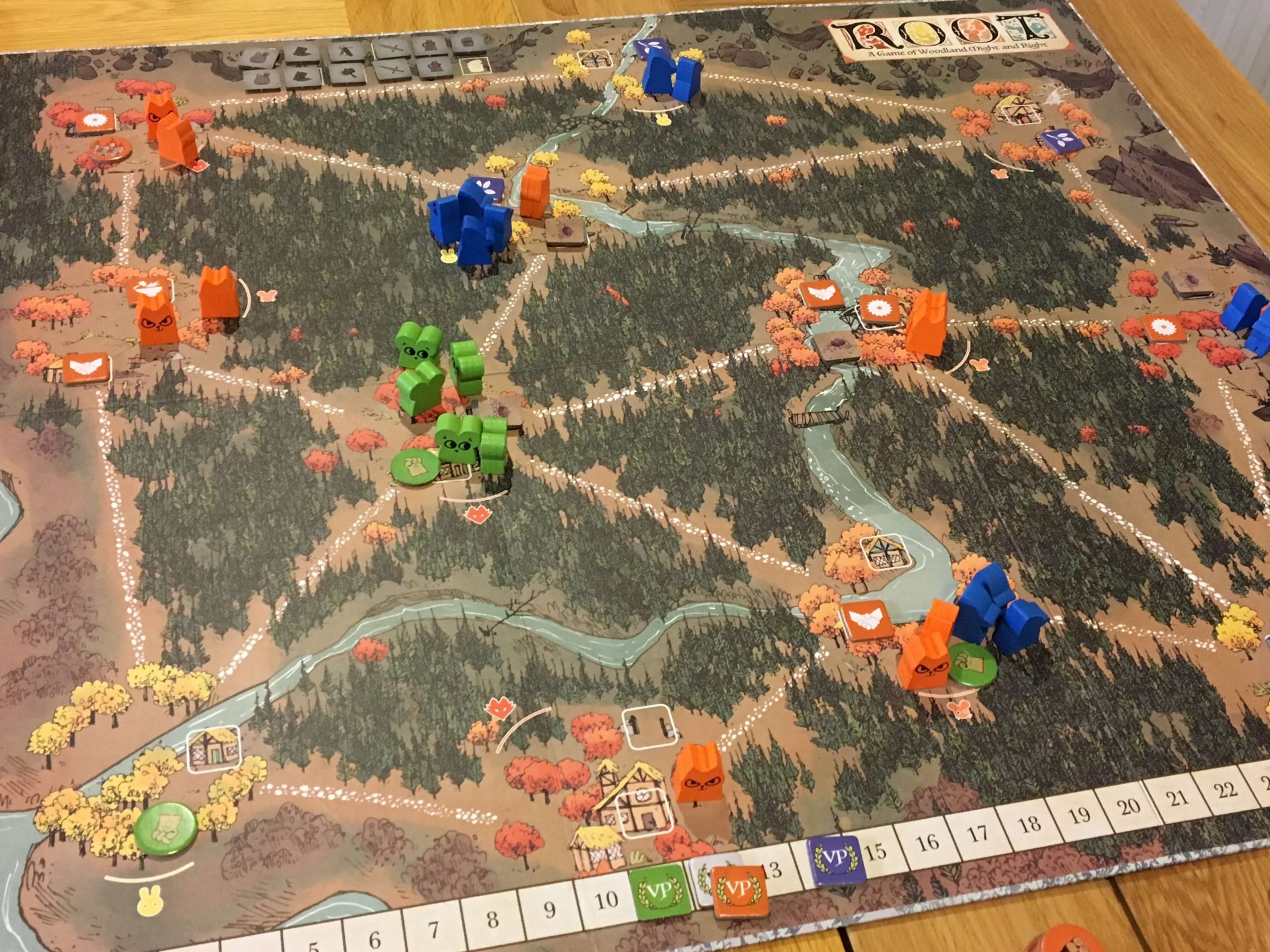 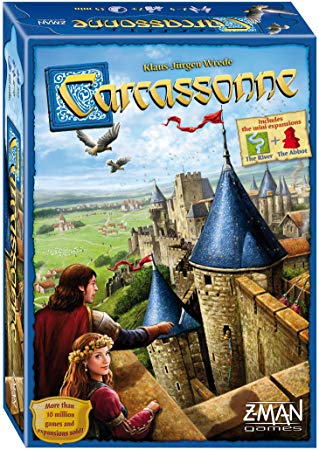 The first thing you need to do is to pick a game that you know and ideally love. This should be a symmetric game, but there are no restrictions on the game itself. You could choose an old favourite like Cluedo or Scrabble, or perhaps a modern classic like Ticket to Ride or Catan. Choose now, pick a game you know, like and enjoy.

I’m going to use the game Carcassonne for my examples. In Carcassonne, players add tiles to a growing land. As they add a tile to the tableau, they can choose whether or not to add one of their meeples to the tile as well. Meeples can be placed on roads, in cities or in monasteries and when the construction is complete, the meeple is returned to the player and scored. Meeples can also be placed in fields for end game scoring. There are many expansions to Carcassonne, which change the gameplay, adding new tiles, components and scoring options.

Right, so you’ve decided on your game, and I’ve decided on mine. A good way of starting to think about possible asymmetries is by allocating different characters to different players. First, make sure you know what your basic symmetric characters are. What are your players all striving to do? What sort of people are they? Or do they represent bigger or more abstract things? Countries, viruses, alien races? In my example of Carcassonne, we assume players are nobles who wish to be associated with as many new constructions as possible – players are constantly pushing in on projects that are well underway to claim the glory and share or steal the points. Who are the players representing in the game you’ve chosen? They could be representing corporations – as in Terraforming Mars, or perhaps they are representing a pair of bugs, as in Echidna Shuffle.  When you’ve worked out what the generic player character is, you can start to create individual characters – developing specialist traits.

Let’s have a think about special powers. Special powers that individual characters can have usually allow players to boost actions in some way. They can do what everyone else can do, but better – stronger, bigger, longer, or just more. So if your characters in your game can take a move action, perhaps a character with special ‘move’ abilities can move in a different way. They could move further, move faster, move in more directions, move without getting tired, move an extra time… for example. Maybe an action is ‘harvest’ or ‘build’ or ‘shoot’. How can you power up a harvest, build or shoot action? 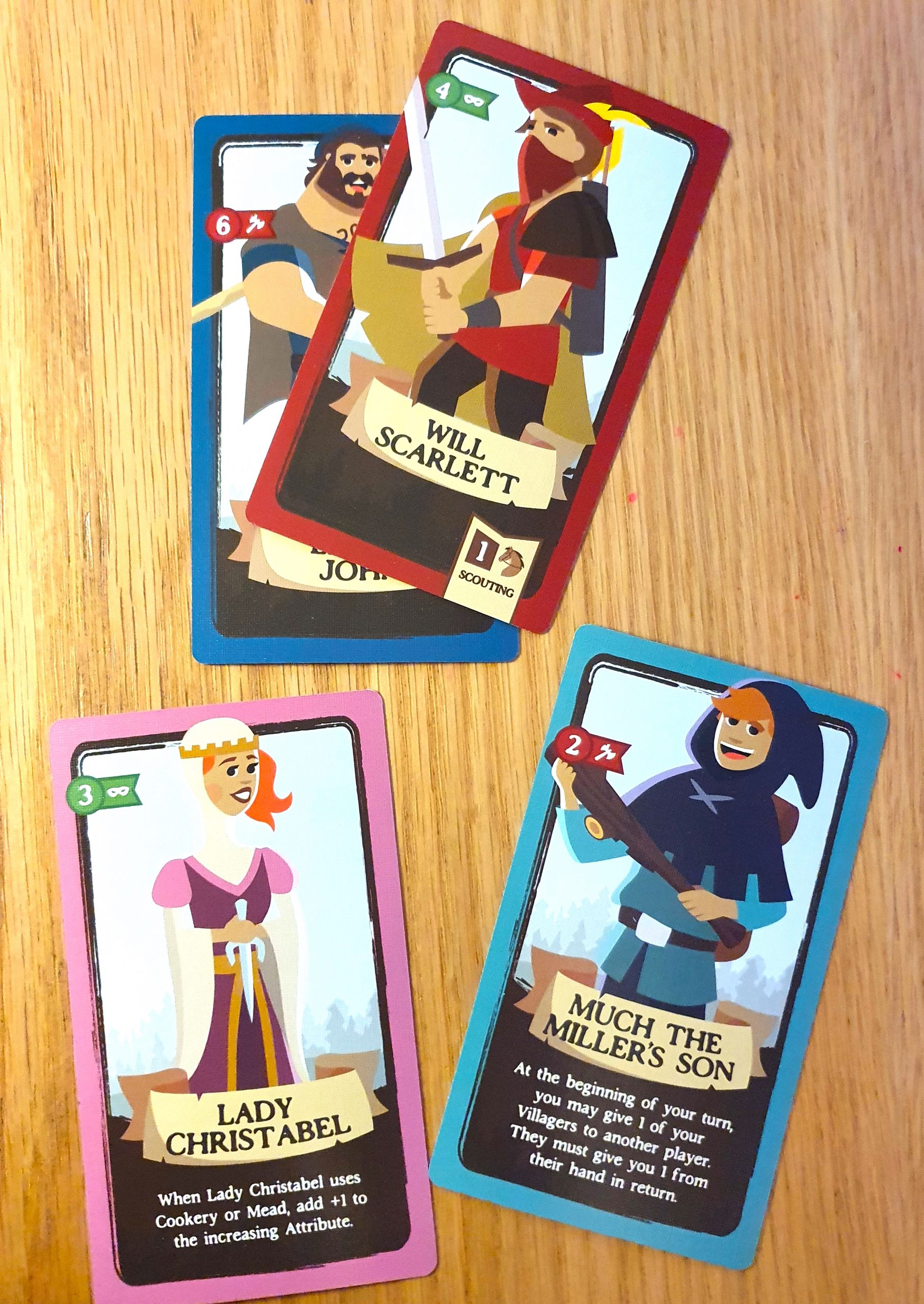 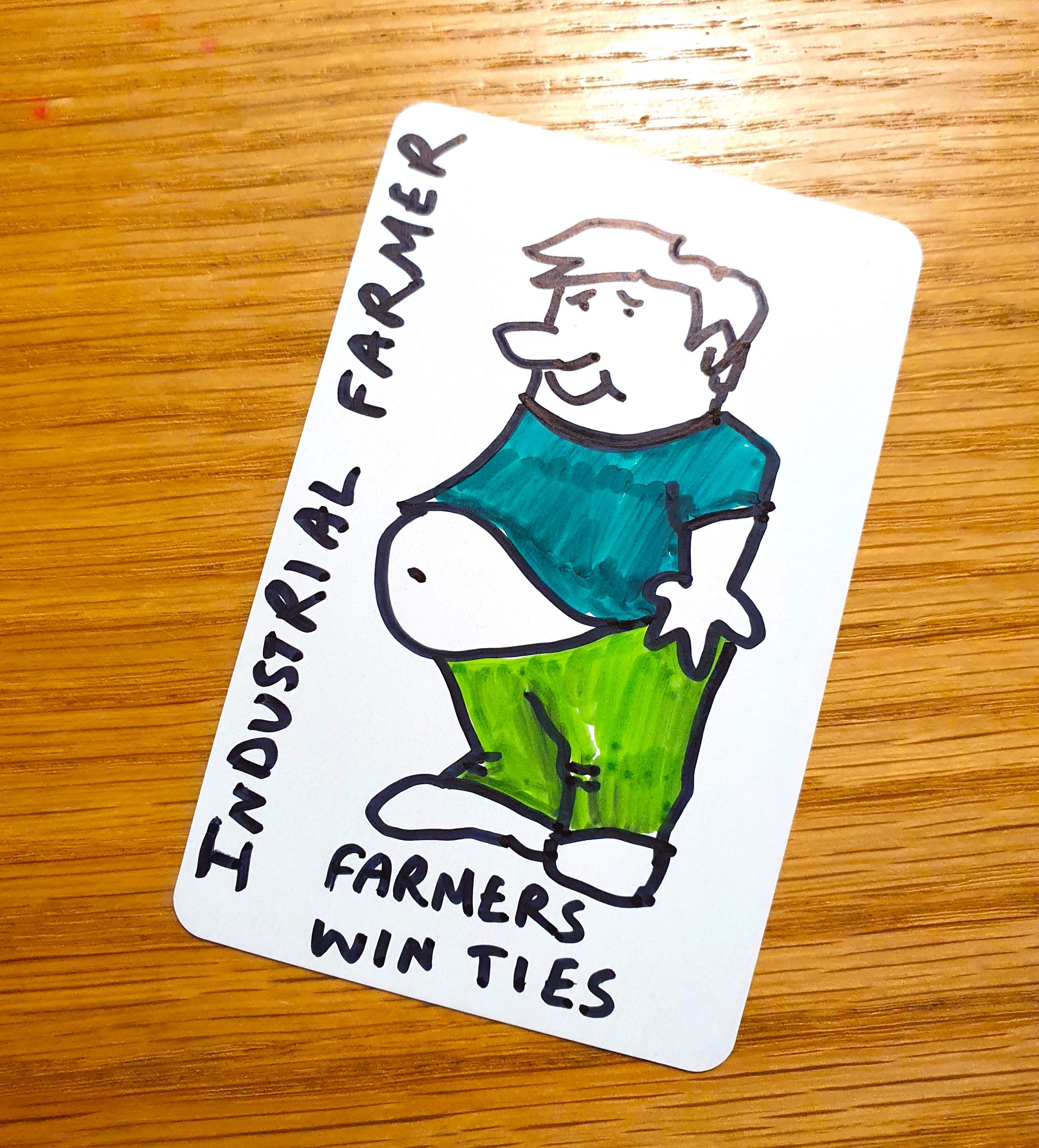 In Carcassonne, one player could be a ‘powerful landowner’. When they place a tile, they can choose whether to place a meeple on that tile or on an unclaimed feature the tile they’ve just joined to. This is a really good ability as they can make use of areas already constructed. Perhaps one player could be a ‘master influencer’ – when constructing cities, they always win ties rather than sharing points with others. Another player could be a seer – always able to look at two tiles and choose the one they want to add, rather than being forced to work with the first tile all the time.

What special abilities could the characters in your chosen game have? Make them totally different from each other, give each character a name and quickly sketch out their picture.

Now you can delve more deeply into each character. Create a sort of profile for them. Flesh out the character a bit. What are they like as they operate in the world of the game? If you were going to meet this character in their world, would you like them? What sort of energy would they give off? Where do they hang out? Who with? What do they spend their time doing? Are they industrious or lazy? Well liked or universally reviled? Keep going until you feel like you’ve got varying profiles of different characters that operate in the world – each that has been created from a souped-up basic action.

Now you can take a step back and think about the game again. If each character had their own special component, what would it be? Perhaps my ‘master influencer’ in Carcassonne has a hat that it can add to any meeple to break a tie. Perhaps there’s a priest who has an extra monastery tile which he can choose to place during the game. What about your game? What extra components will you make available?

Now, perhaps your characters score more for taking certain actions? Perhaps they can trigger bonus points by hitting a series of targets or completing a mission? How can the scoring for each character be modified?

Finally, could each character have different victory conditions? In my asymmetric version of  Carcassonne, perhaps each character must have built a certain mega-feature, or their score is wiped out at the end of the game. 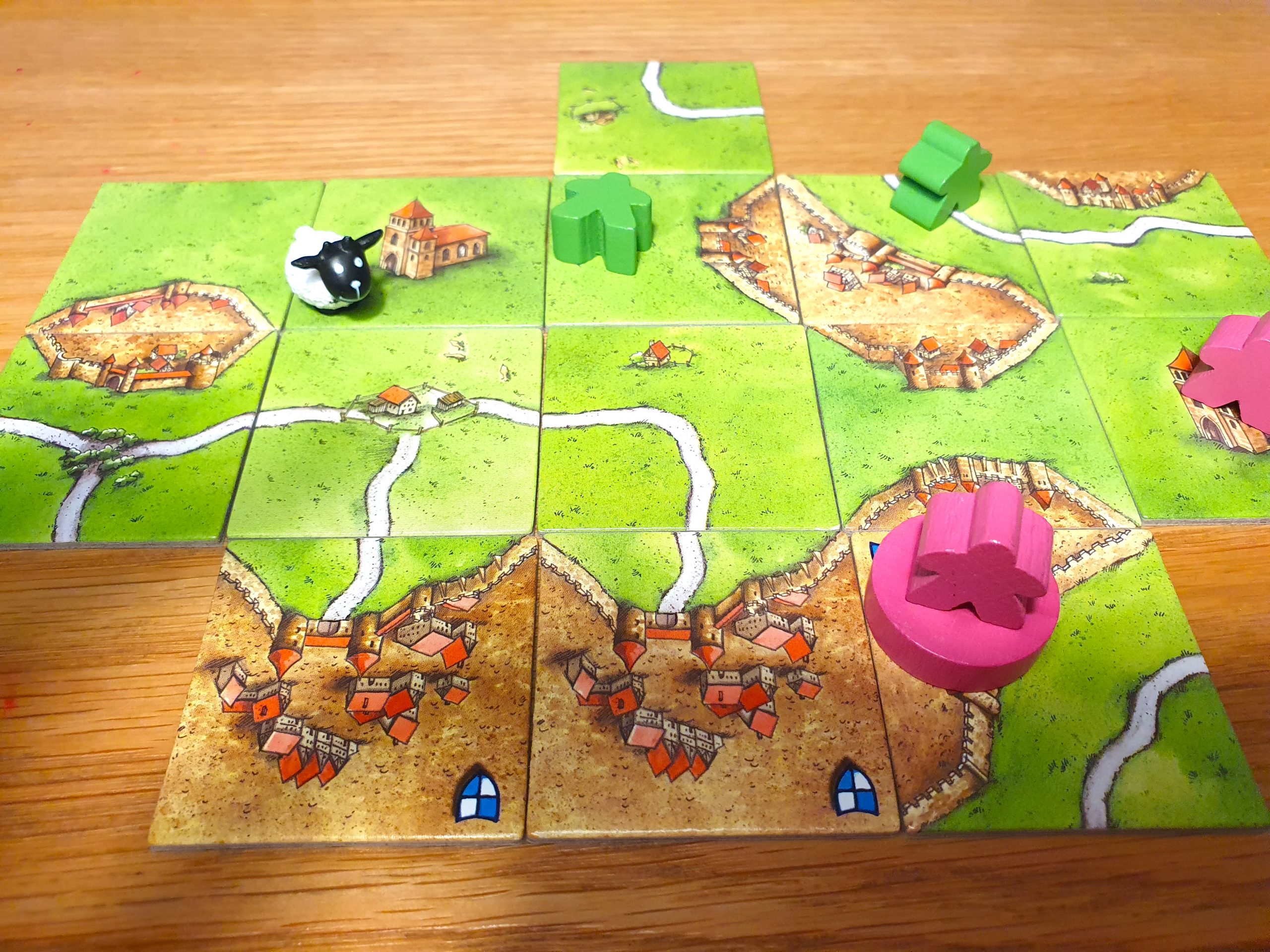 Play around with these ideas. You don’t need to include everything. Your asymmetric version does not need to differ from the original in all ways, just enough to make each player’s experience different.

One of the delights of asymmetric games is that they increase replayability. You really want to play as all the different characters so that you can see how they different strategies play out. You may want to win as each character, or you might find a favourite and stick to them, refining your strategy over time.

Of course, when we start to incorporate any sort of asymmetry into games, you’ll probably want to keep testing to make sure that no one character is totally overpowered. Unless, of course, you want to explore what happens when you make an unbalanced game! Maybe you can have one super-powerful character and the other characters all have to work together to try and beat them.

As always, I’d love you to share ideas that have cropped up as a result of tackling this game design challenge. Please share ideas and pictures below.