Top Cake was blind playtested this week.  In a blind test, the players teach themselves the rules from the rule book, while the designer watches and takes notes. In Top Cake, players compete to win layers of cake in a partially hidden auction. These cake layers are then stacked to form a gravity-defying and hopefully high-scoring masterpiece. Cakes crowned with a topper will double the value… if they are high enough.

The rule book proved to be pretty robust, though several sections need information presenting in a more intuitive order. The way the cards come out will also be tweaked slightly to avoid players making the mistake of winning a cake topper that would be worthless in round 1. There was a lot of bluffing and attempted mind-reading as players tried to second-guess the hidden actions of their opponents. The game is short but meaty. Top Cake will be available in BuzzleBox 2. 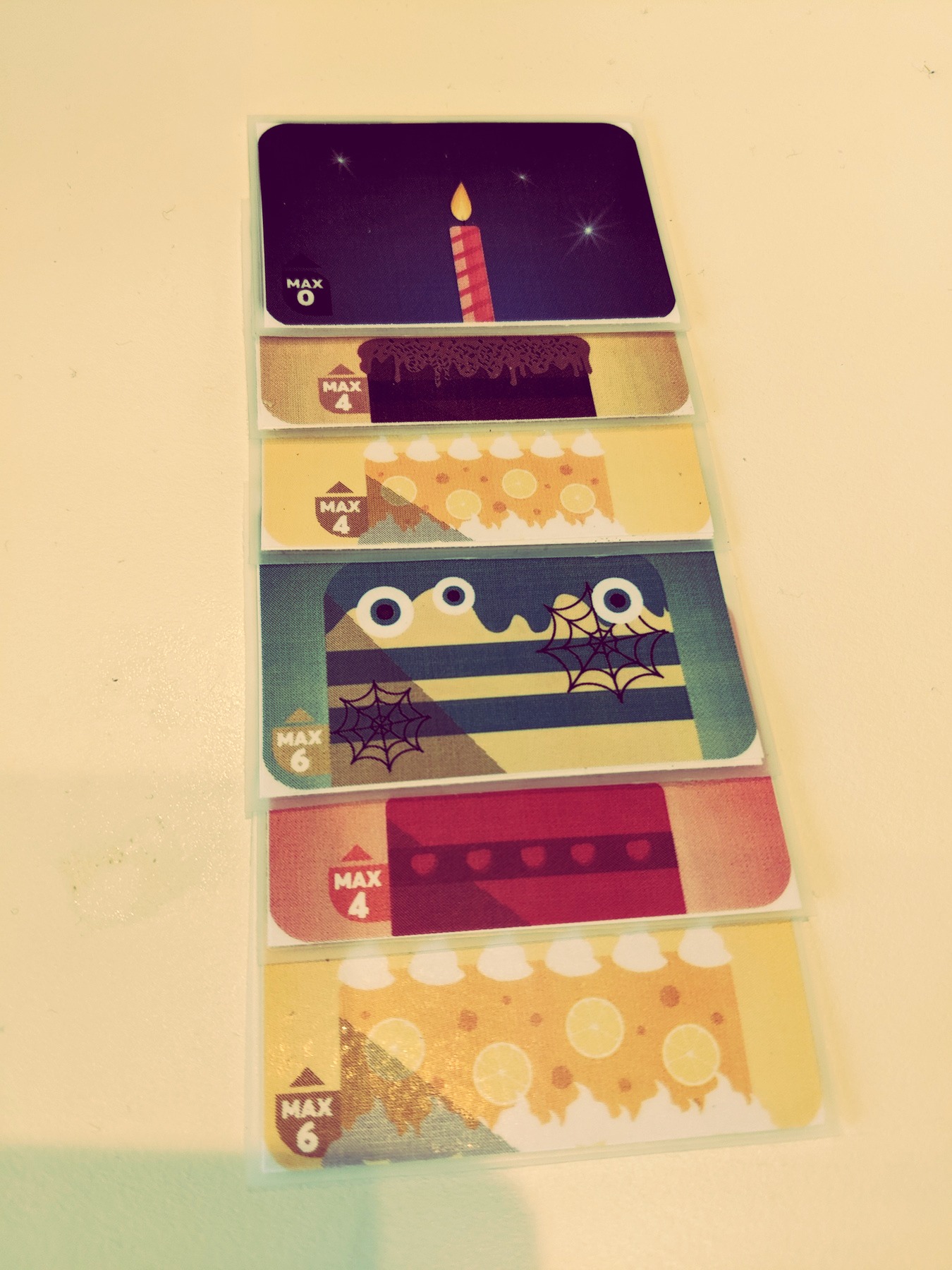 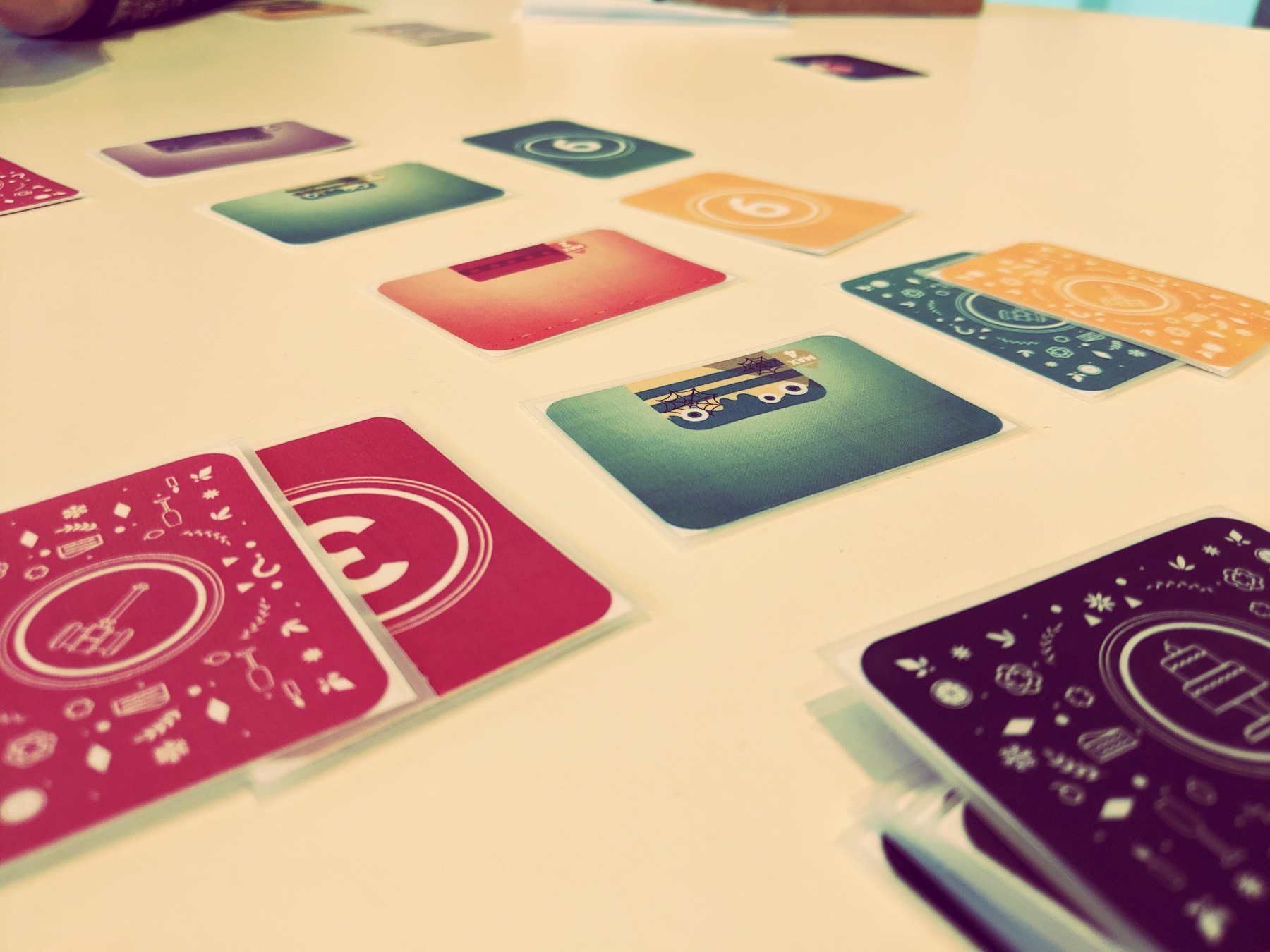 The Dark Imp will be releasing a set of coaster games – games that can be played just using a pen, paper and a coaster. This week, two of these games have been developed and playtested.

In Ice Cream Truck, players start with some money and an ice cream truck. The game takes place over a series of rounds, each one representing a day. Players decide how much money to spend on ice creams each day. Then the coaster is shuffled about under the table and drawn out by one corner. Each corner represents a different weather condition – sunny, cloudy, rainy and stormy. The number of ice creams each person sells depends on how many they have bought and the weather on the day. On a sunny day, more ice creams can be sold. When it’s stormy, nobody wants ice creams and the stock will go to waste. Players can also invest in advertisements, a tea urn or ice-cream making training to increase sales.

This game has gone through two different versions this week. The first version, which I played with my Mum, was a bit too mathsy. There were lots of percentages that needed calculating, which I’m sure most people wouldn’t be bothered with. In Version 2, players can only buy ice creams in packets of 8. The sales price for all the weather conditions is marked on the coaster. Players keep track of their balance and stock on their paper. Ice Cream Truck was inspired by the old BBC computer game Tea Shop, which I was slightly obsessed with as a child. You can play Tea Shop online here.

Treasure Split is a game for 2 players. It is based on the ‘Split or Steal’ mechanism popularised by the 00s daytime TV quiz show, Golden Balls, which was hosted by Jasper Carrott. The players walk on a trail around an island. Along the path are various piles of treasure. At each stage, both players must decide whether to split the treasure or steal it from the other player. If both players ‘split’, then the treasure is shared. If both ‘steal’, nobody gets the treasure. If one ‘splits’ and one ‘steals’, the ‘stealer’ gets the booty.

My younger son, Bertie, helped me playtest Treasure Split at the end of his holidays. It became very clear very quickly that Bertie was going to ‘steal’ when he reached every pile of treasure. Not much of a game…  So we switched up the idea a bit and made it semi-cooperative. You are still competing to get the most treasure at the end of the walk, but along the way are checkpoints where players must both meet certain requirements for either to continue down the path. For example, both players may be required to have all three types of gems, or one player may need to have at least double the amount of treasure the other has to progress. Players need to get to the end of the trail to get the biggest bounty.  This one is now ready for the main playtest sessions. 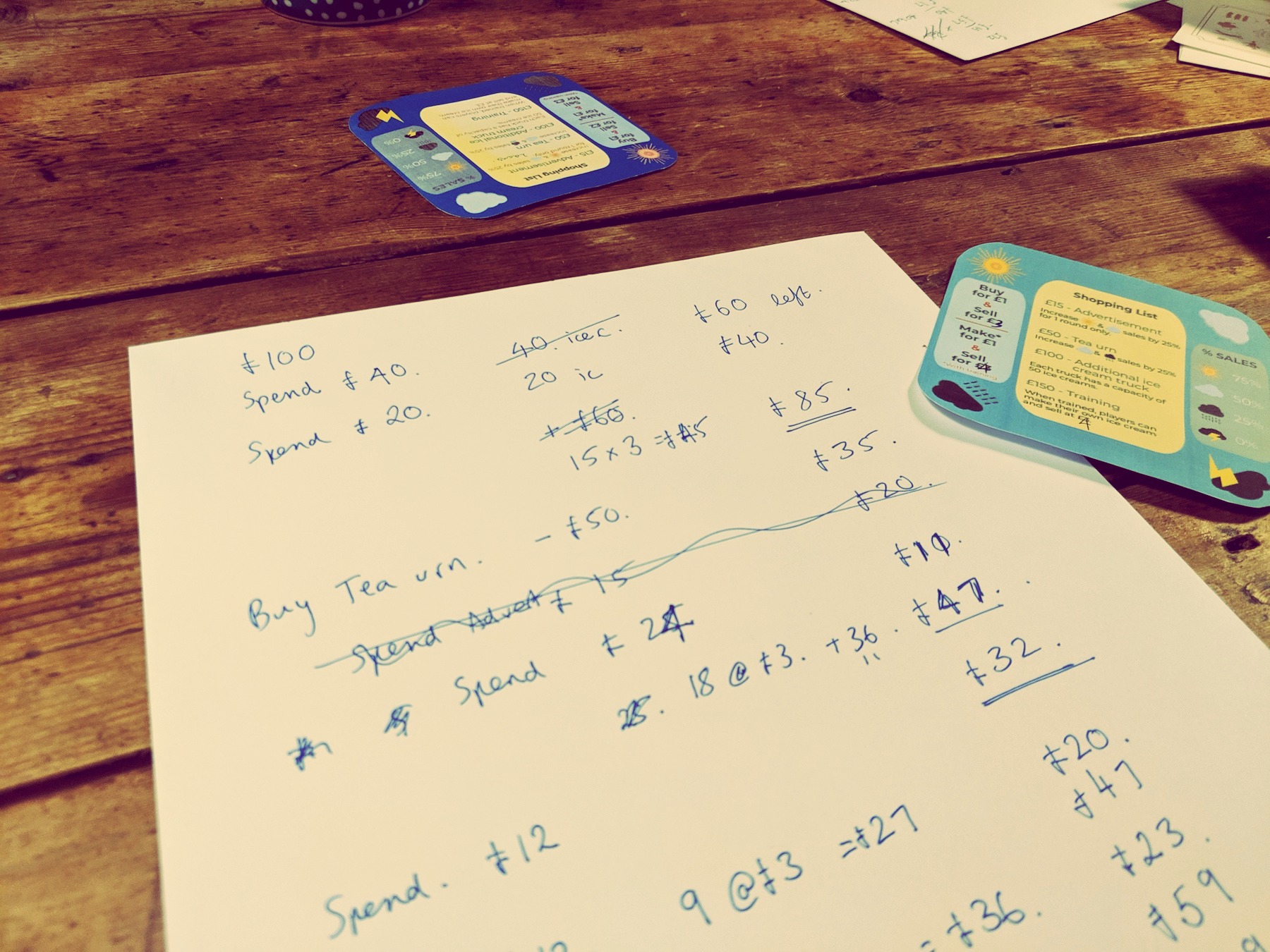 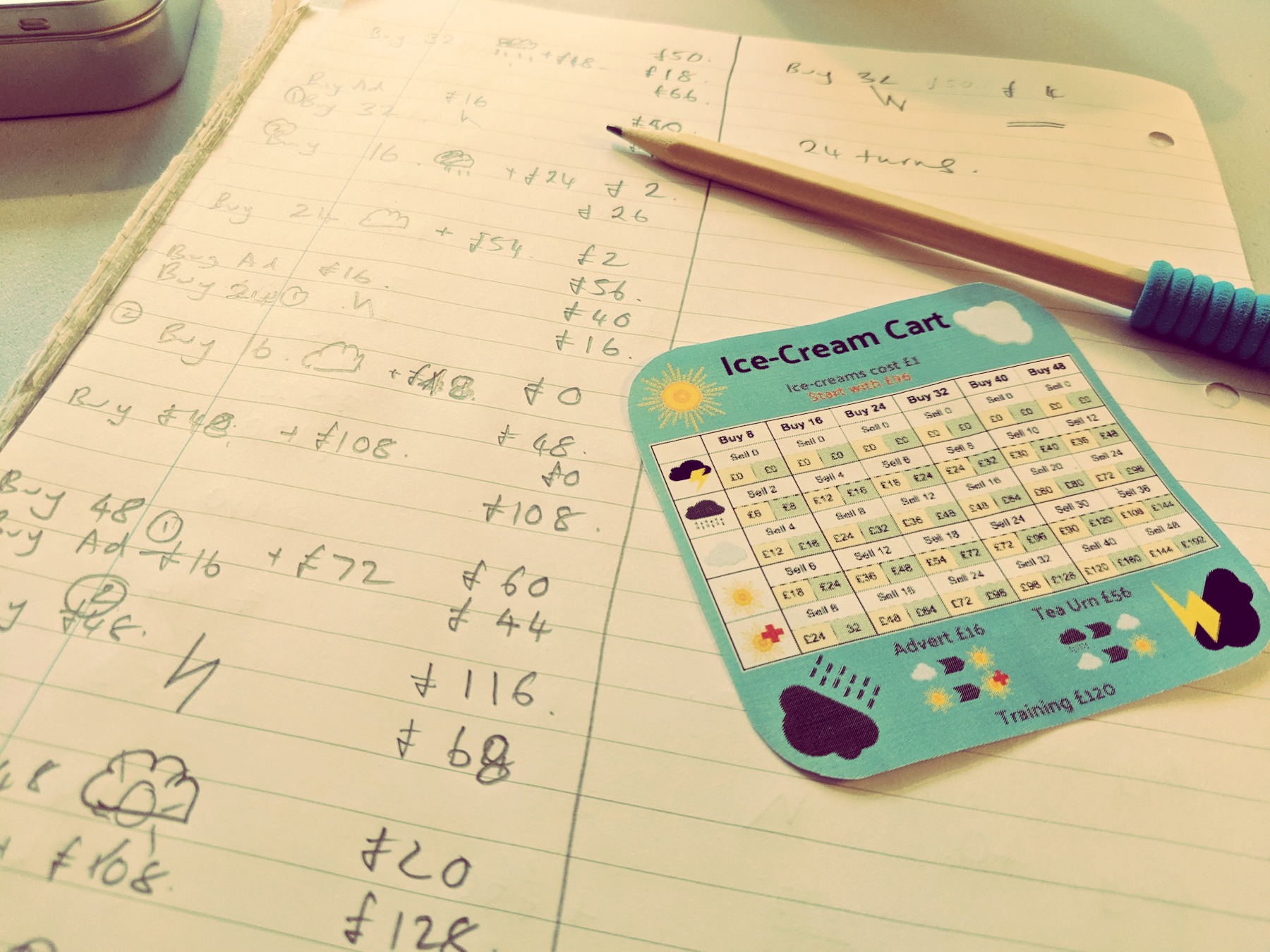 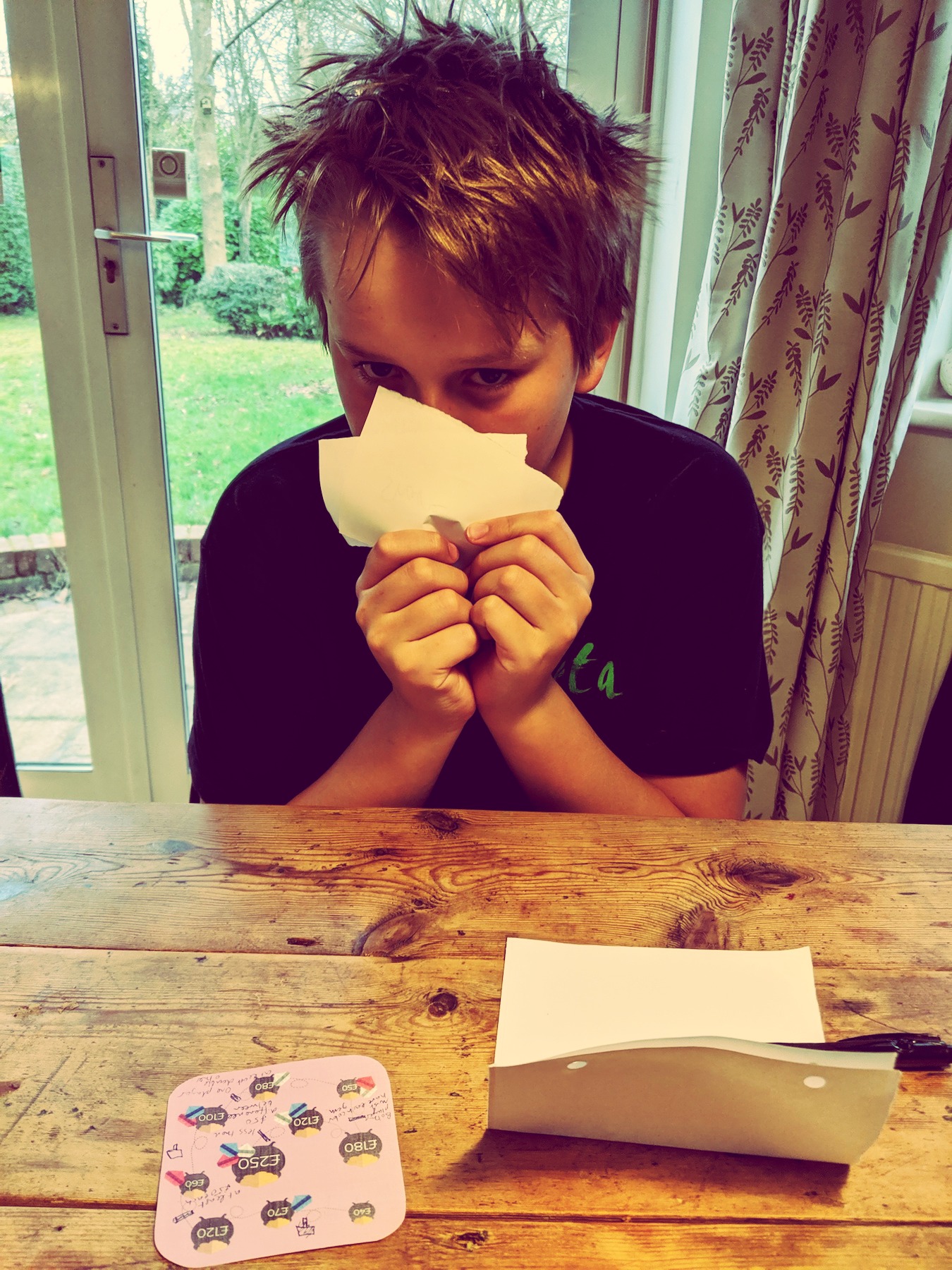 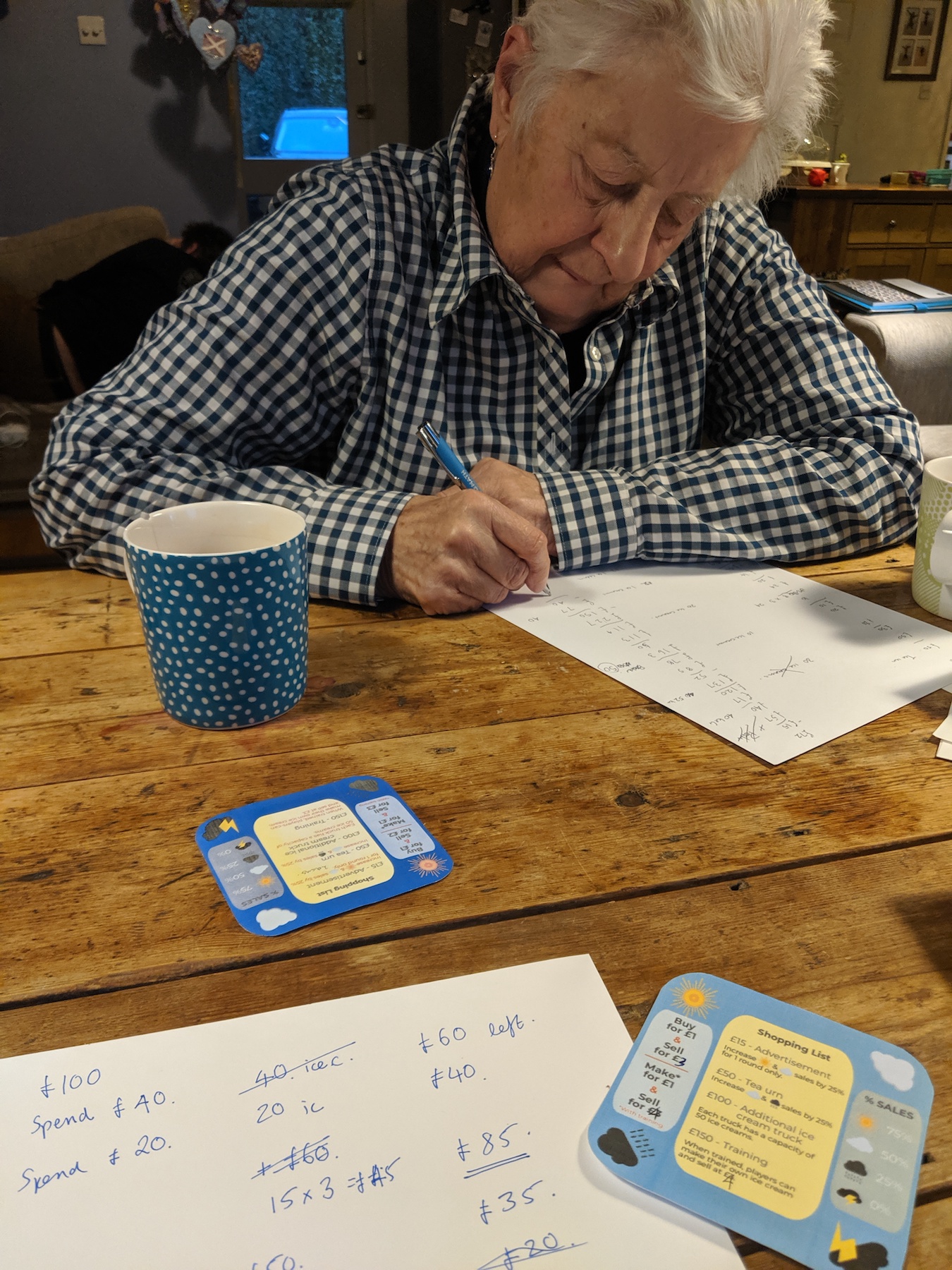 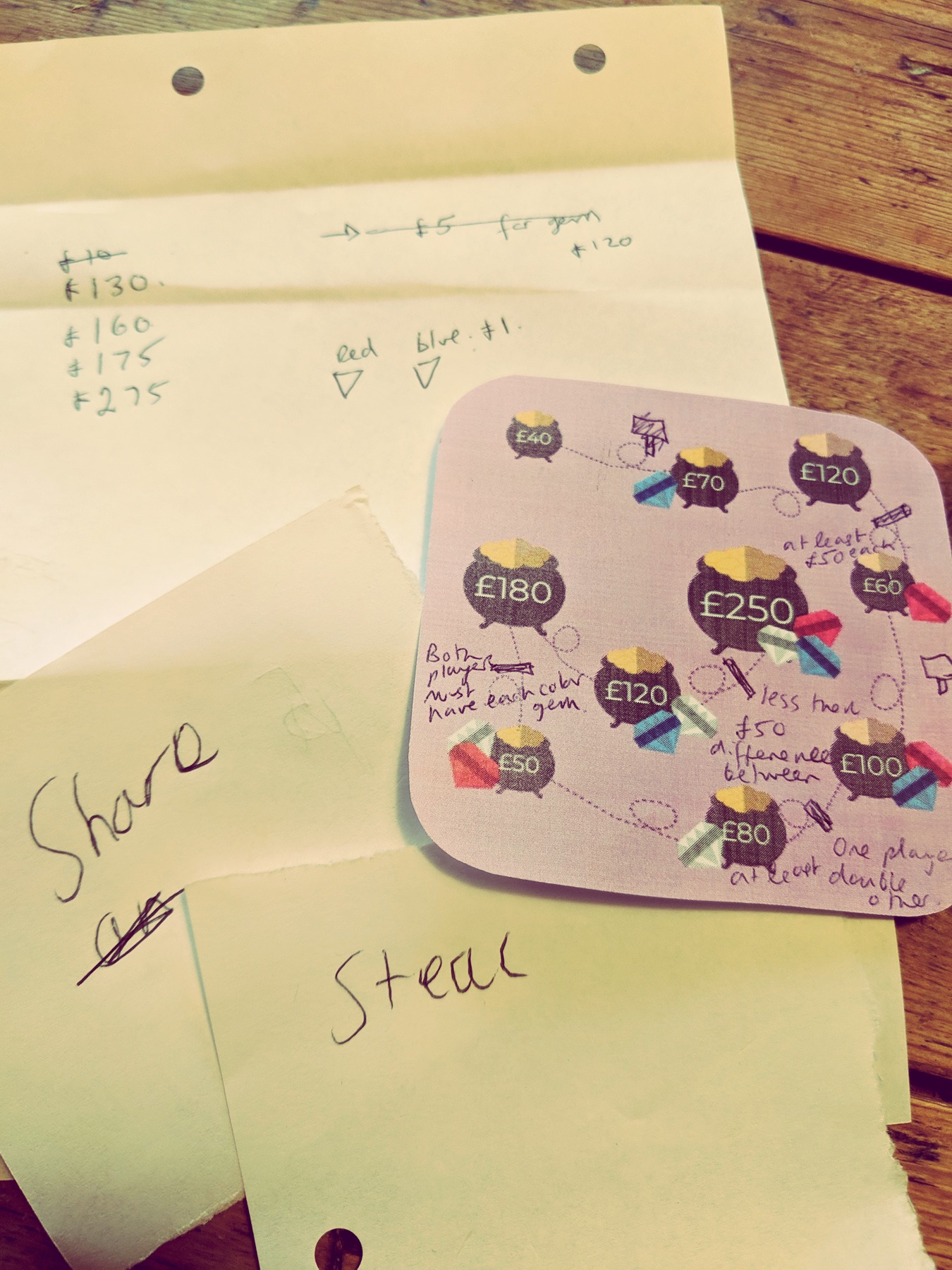 The new card placement game about connecting lines of different colours and scoring lines when they are as long as possible has a new name and theme. Dirty Business will be set in the underground world of the sewer system. Each player’s imp will be working on a different section of the network. At the moment, the prototype just has coloured lines, and no theme shown in the artwork.

Since the first version, the cards have changed from rectangles to squares. Now there are four points of entry to each card instead of six, but there are four different types of pipe. Each card now has multiple copies which means that there is more opportunity to fill up gaps in the system – but also more chance that another player will be able to fill the gap and claim the points. After lots of individual playtesting, Dirty Business is now ready to go to the London game designers playtest group. 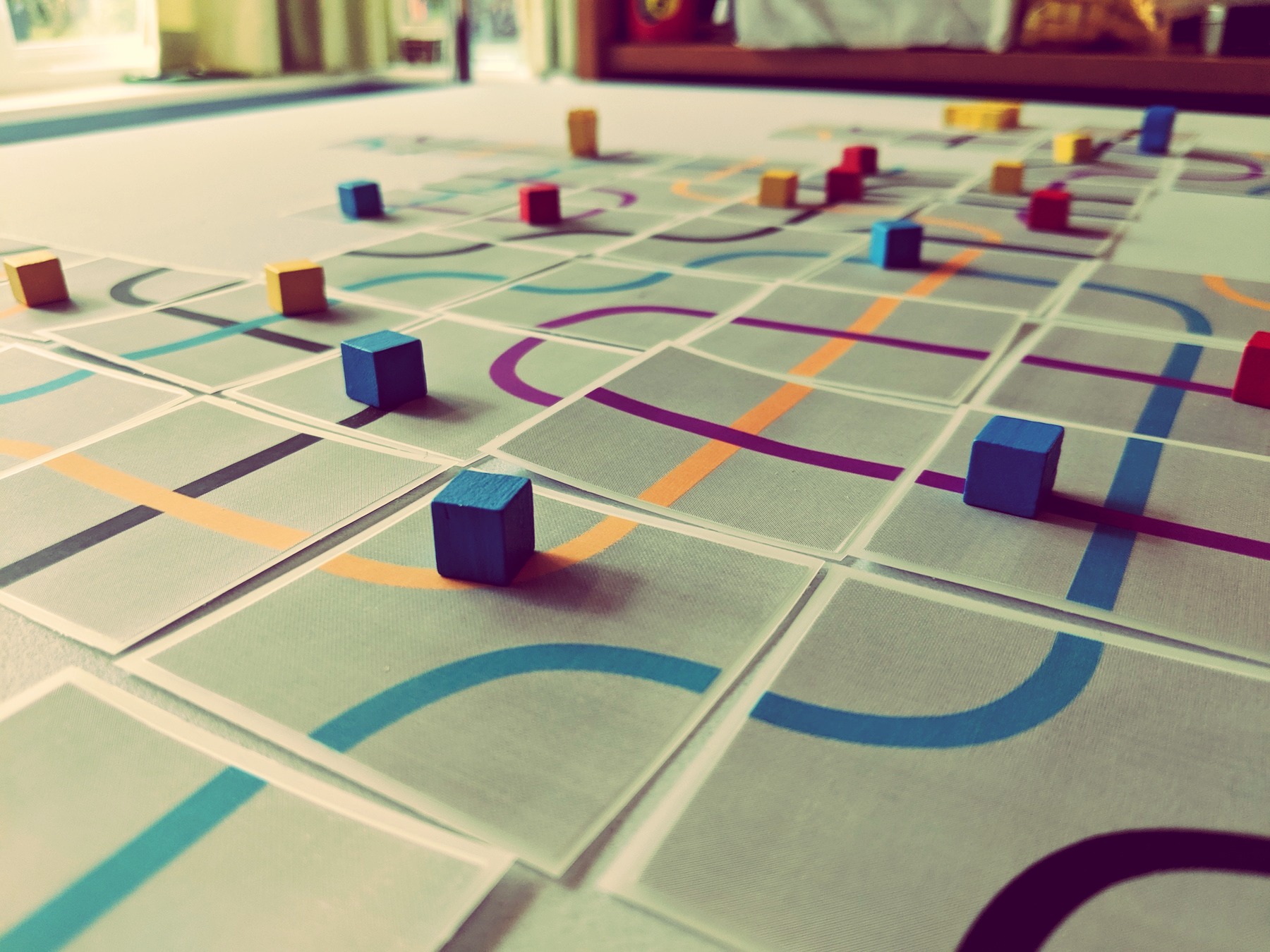 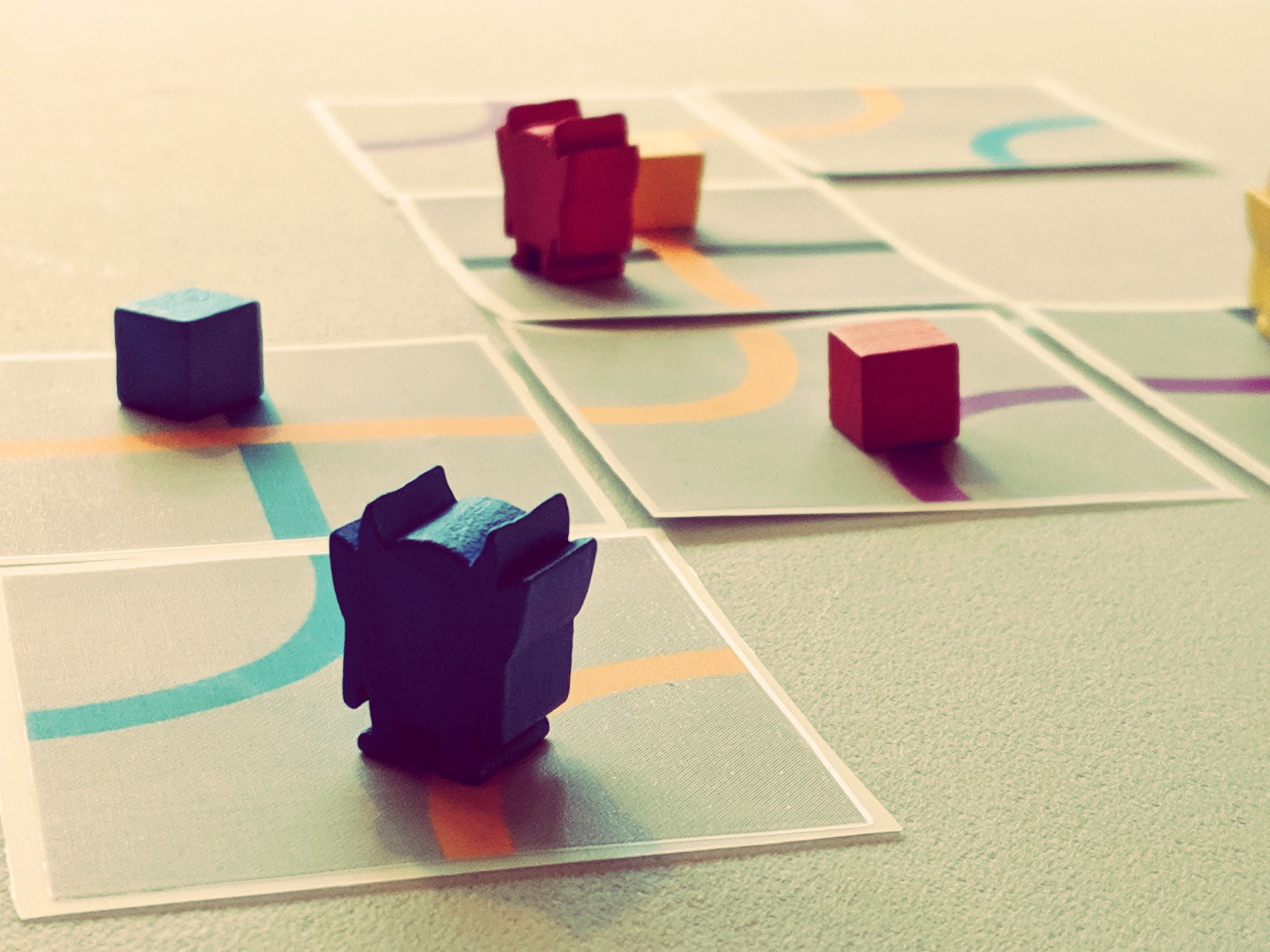 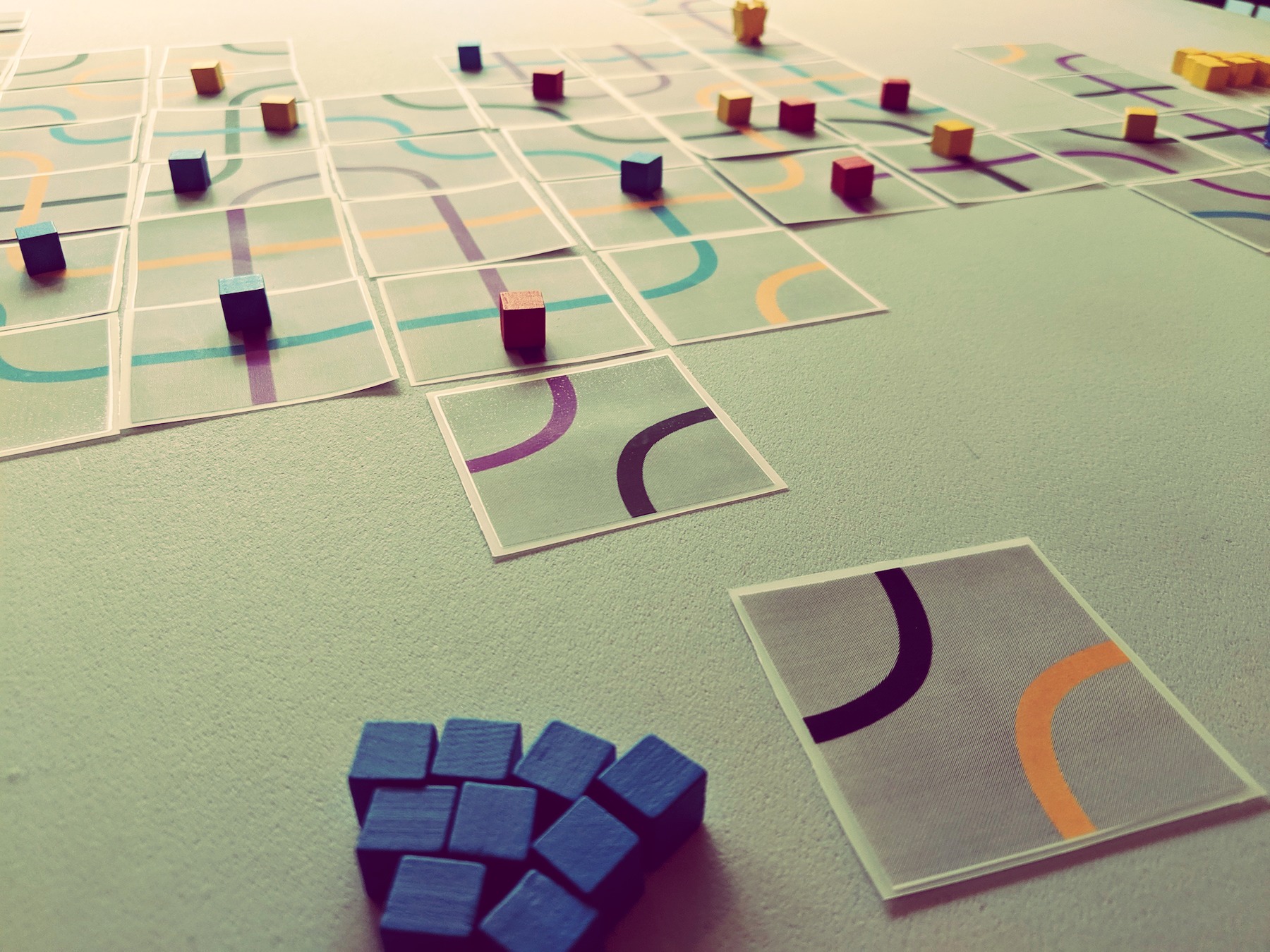 We’ve taken delivery of the new BuzzleBox stickers. These huge and lovely stickers go on the postal box that contains all the items of the BuzzleBox. Many people purchase BuzzleBoxes to gift to others. This easy-peel sticker will allow them to peel off the postage information and have the box clean and clear to wrap and give to others. Also, the stickers look really good! Get your BuzzleBox here. 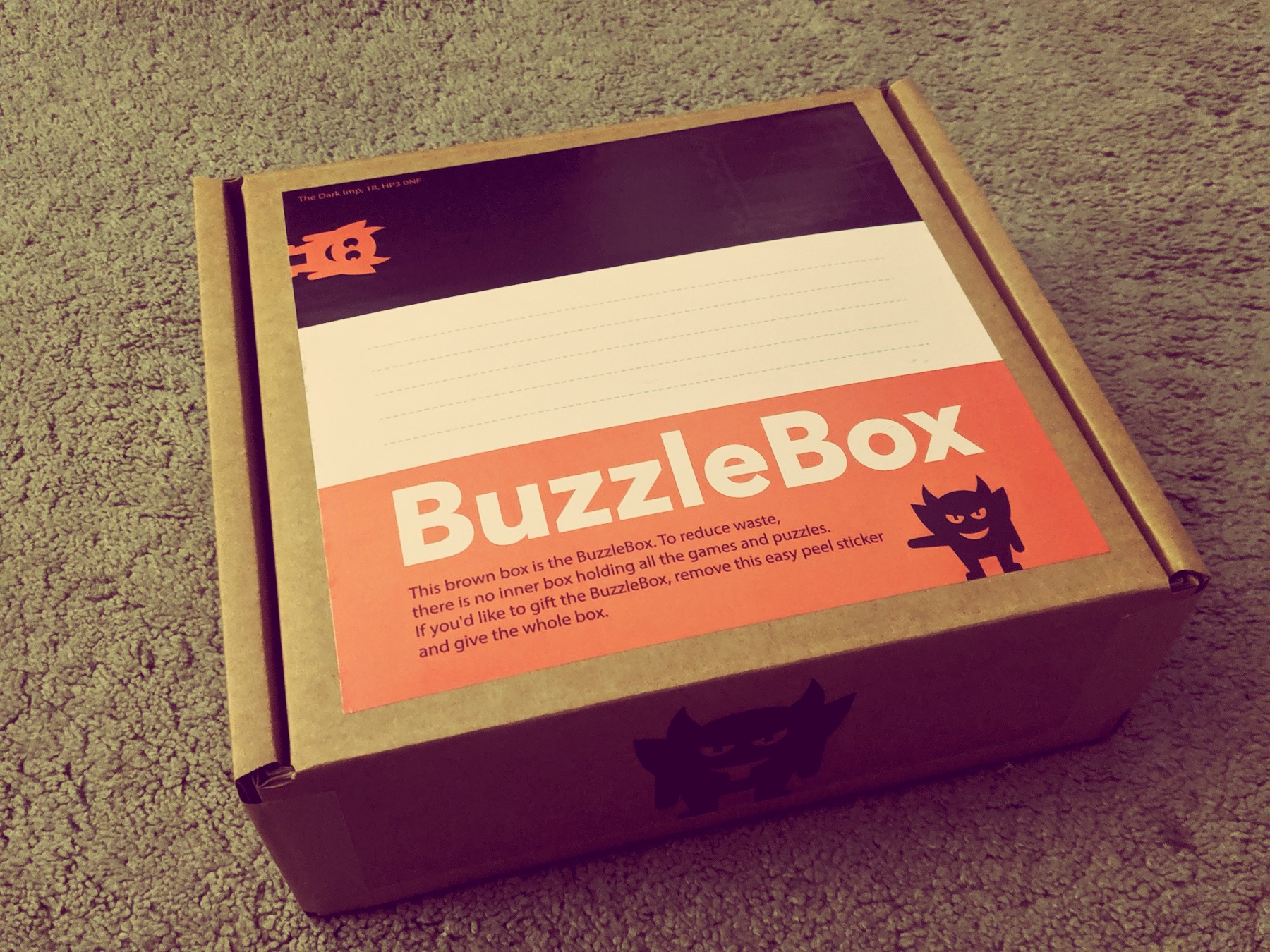