The Dark Imp’s Christmas crackers will be available later this year. But these eco-crackers aren’t just for Christmas. A box of six crackers contains the components to play six different games. Each cracker holds an imp meeple, 20 cubes, 6 playing cards, the rules to a game, a puzzle and, of course, a joke. Games are played not just using the components, but using the central cracker tube itself.

The design team has been hard at work on the look of the crackers and the components within them. This week four of the six games were blind playtested. A blind test involves new players teaching themselves a game from the rules then playing the game. The designer looks on and takes notes.

The blind playtest threw up a few issues, not least the fact that the cards had been printed incorrectly which made two of the six games unplayable. (That is why we test, people). Some terminology needs changing to speak to less games-orientated people. But by and large the tests were successful. The next step is to make the changes to the cards and do a second blind playtest, but this time with people that don’t play so many games.

You’ll be able to pre-order your crackers from the summer. Watch this space for a link. 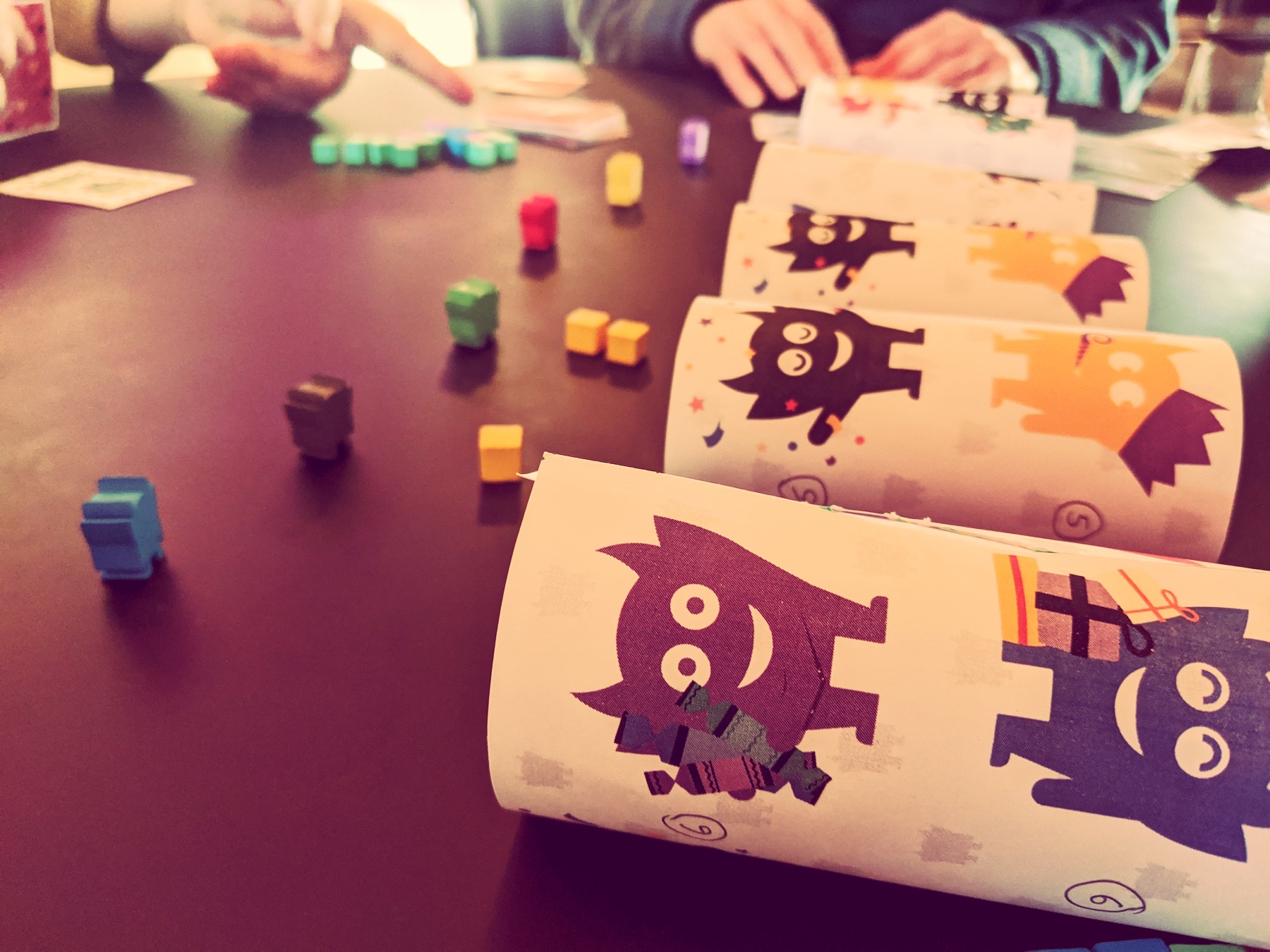 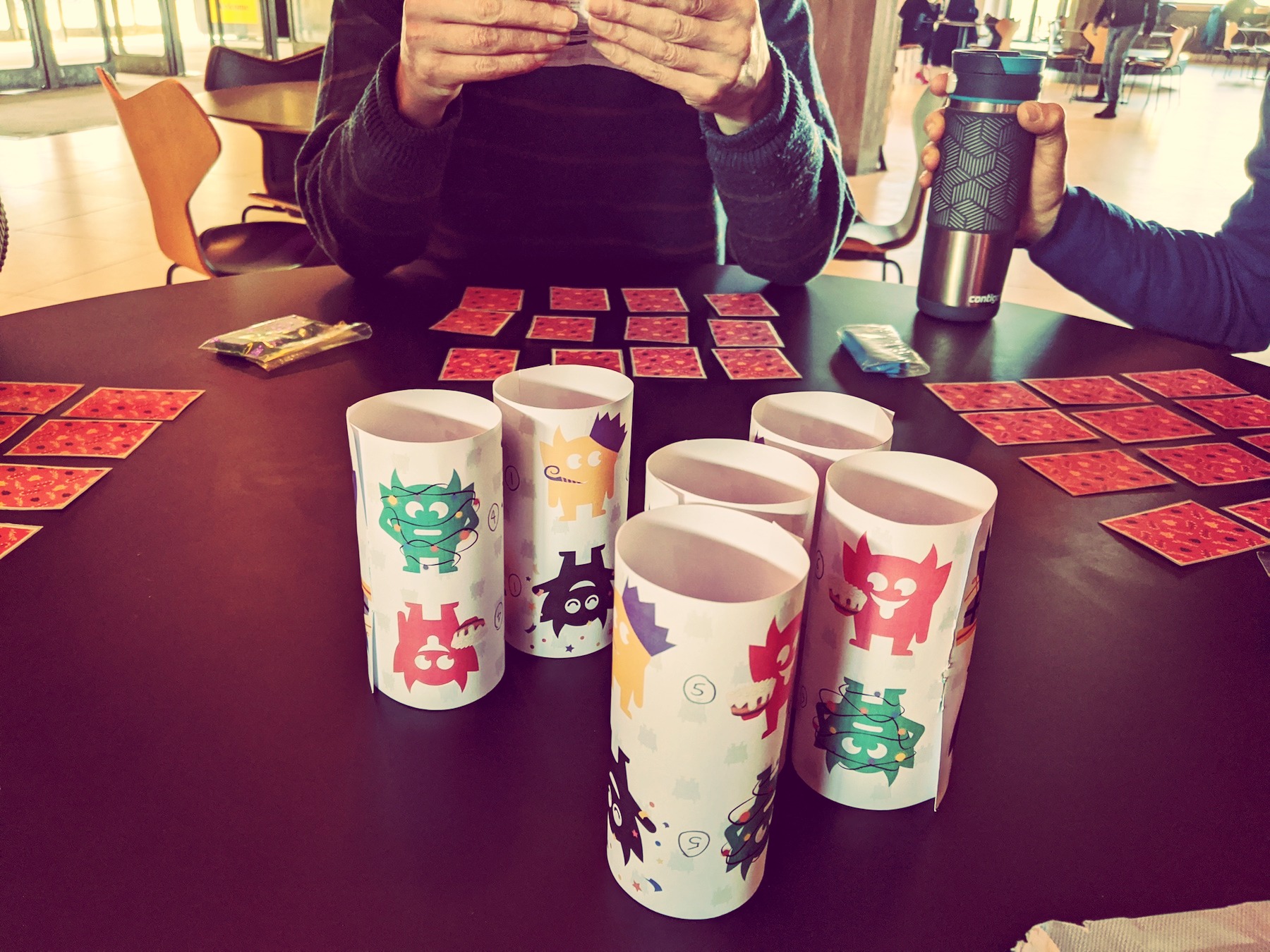 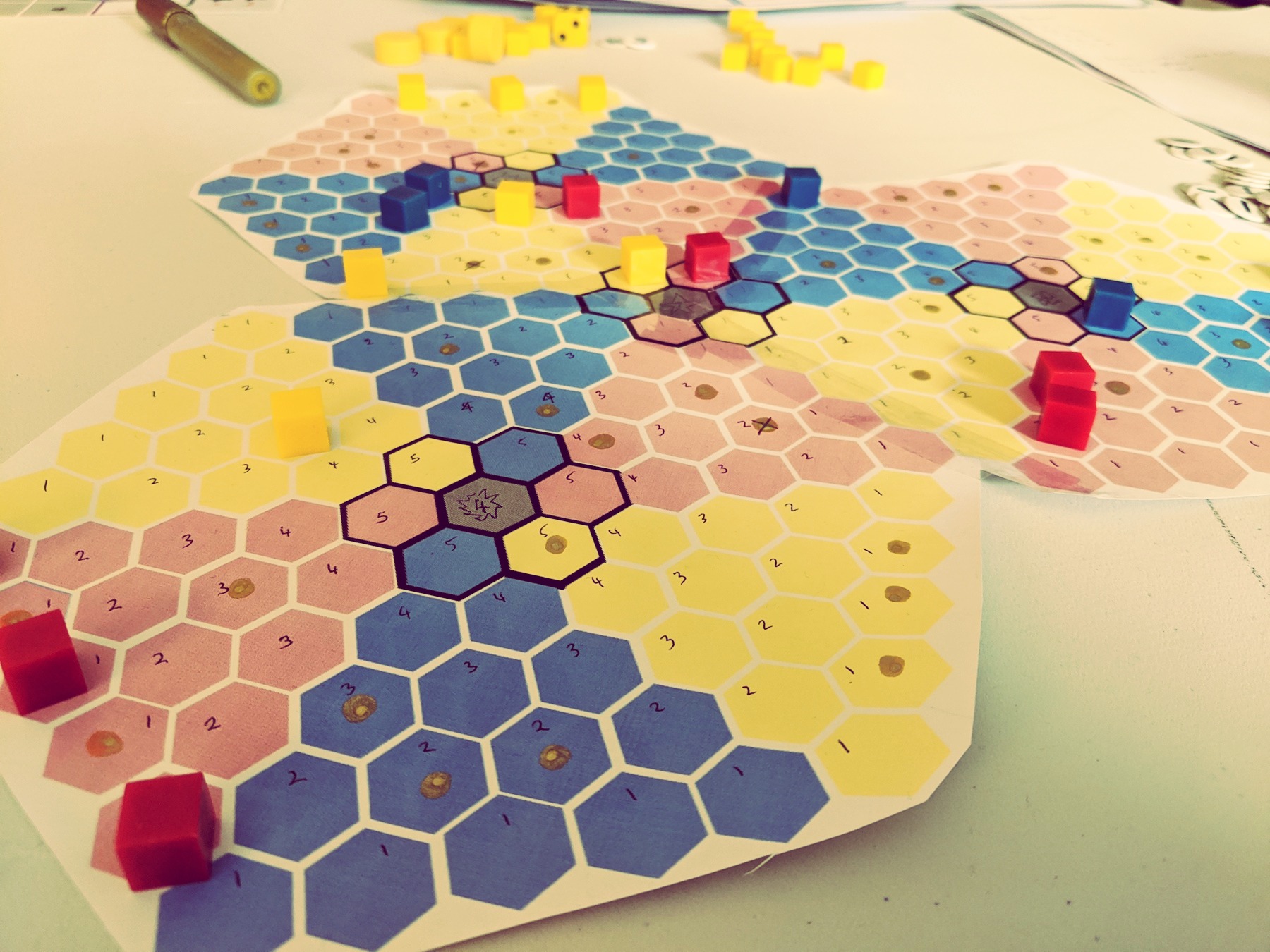 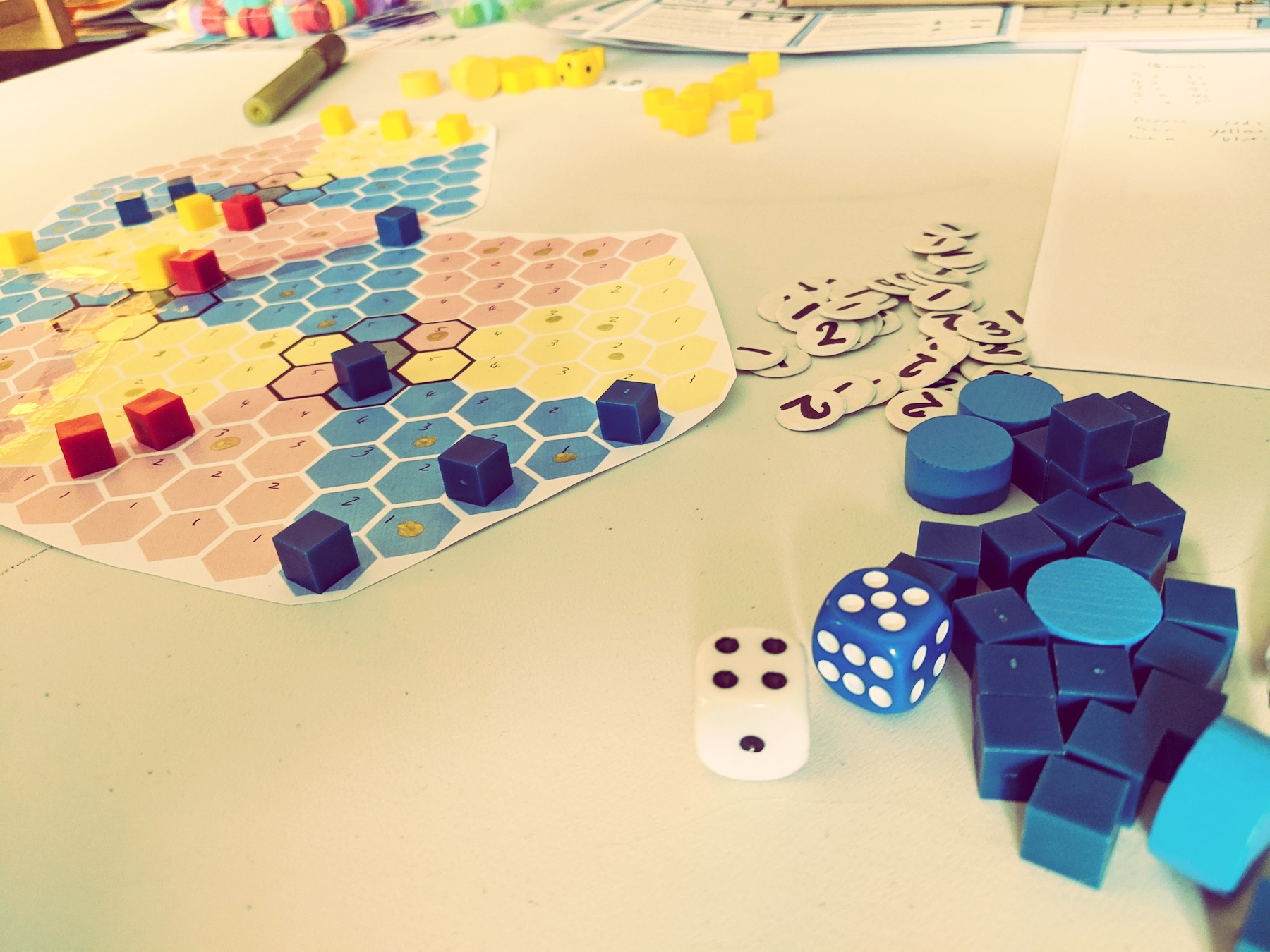 Mob Rule, my game about rival gang bosses fighting for control of a city, has a new 3-player version, which I’ve been solo testing. The previous version only worked for exactly 4 players. In the game players construct temporary mob houses (cubes) on their own turf (colour). Half way through the game, there is a police sweep which clears all but one of the mob houses on each street (row and column).  The player that has the majority of mob houses on each row, gets to select which one she will keep. These remaining houses are then upgraded to regional headquarters (discs). In the second sweep, all headquarters are worth three normal mob houses and give that gang (player) an advantage in controlling that street.

The four player board could not be used with three players. Two players would have a great advantage over the third as there would be some uncontested streets, due to the absence of one gang. But I don’t want to produce a game that can only be played with four. I wanted a version that would work for three, which required a completely new board.

The 3-player board uses hexagons, not squares. The police sweeps take place across all three directions. Players have more mob houses, but less chance of these staying put in the sweeps. This new 3-player board has now been solo-playtested (with me as all three players). However, there is a blind bidding mechanism that resolves tied streets, which is impossible to solo playtest. It appears that the game basically works. Now I need to play with actual players to see how it may break!

I’ve been experimenting with a new deck of cards. Cards range from 1 to 15 in four different suits. However, each card, when rotated has a different score. For example, a 7 becomes a 5 when rotated, a 12 becomes a 4 … and a 1 becomes a 15.

My initial idea was for players to bid for the right to score certain suits using cards they win in an initial trick-taking phase. But there is an organisational problem around bidding for several different pots, keeping bids secret and also keeping them in order. Also, when discussing the idea with some of my fellow board game designers yesterday, Sebastian Bleasedale (designer of Keyflower and On the Underground amongst other games) pointed out that the trick taking and the bidding feel like two different games. He said it is, “A bit like playing a game of poker to determine who gets to start at chess.” It’s annoying, but useful, when people point out things that should be blindingly obvious.

I like the deck though, I think it will work in a trick-taking game. I’m now abandoning the bidding and looking for a more interesting way to score! 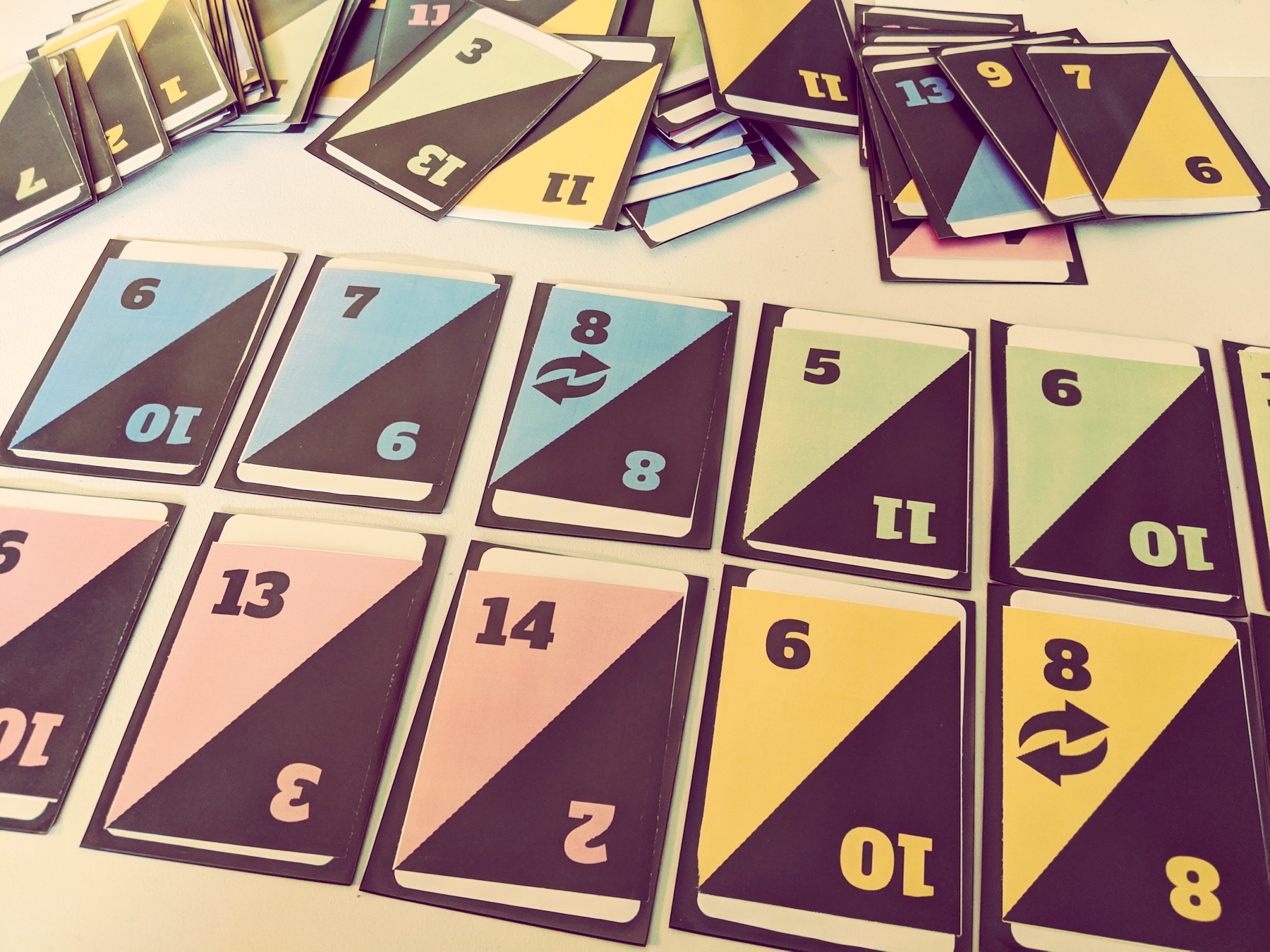 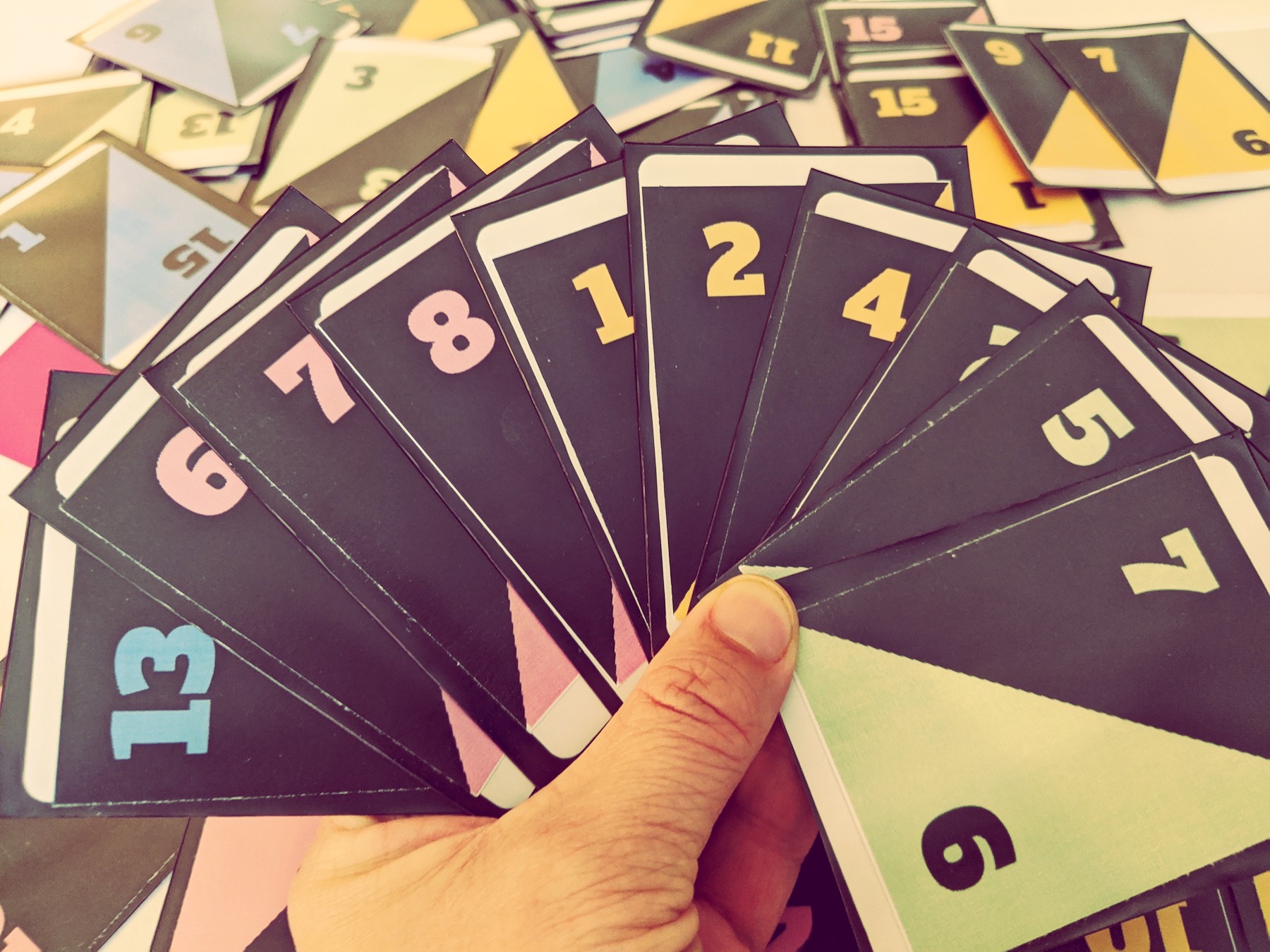 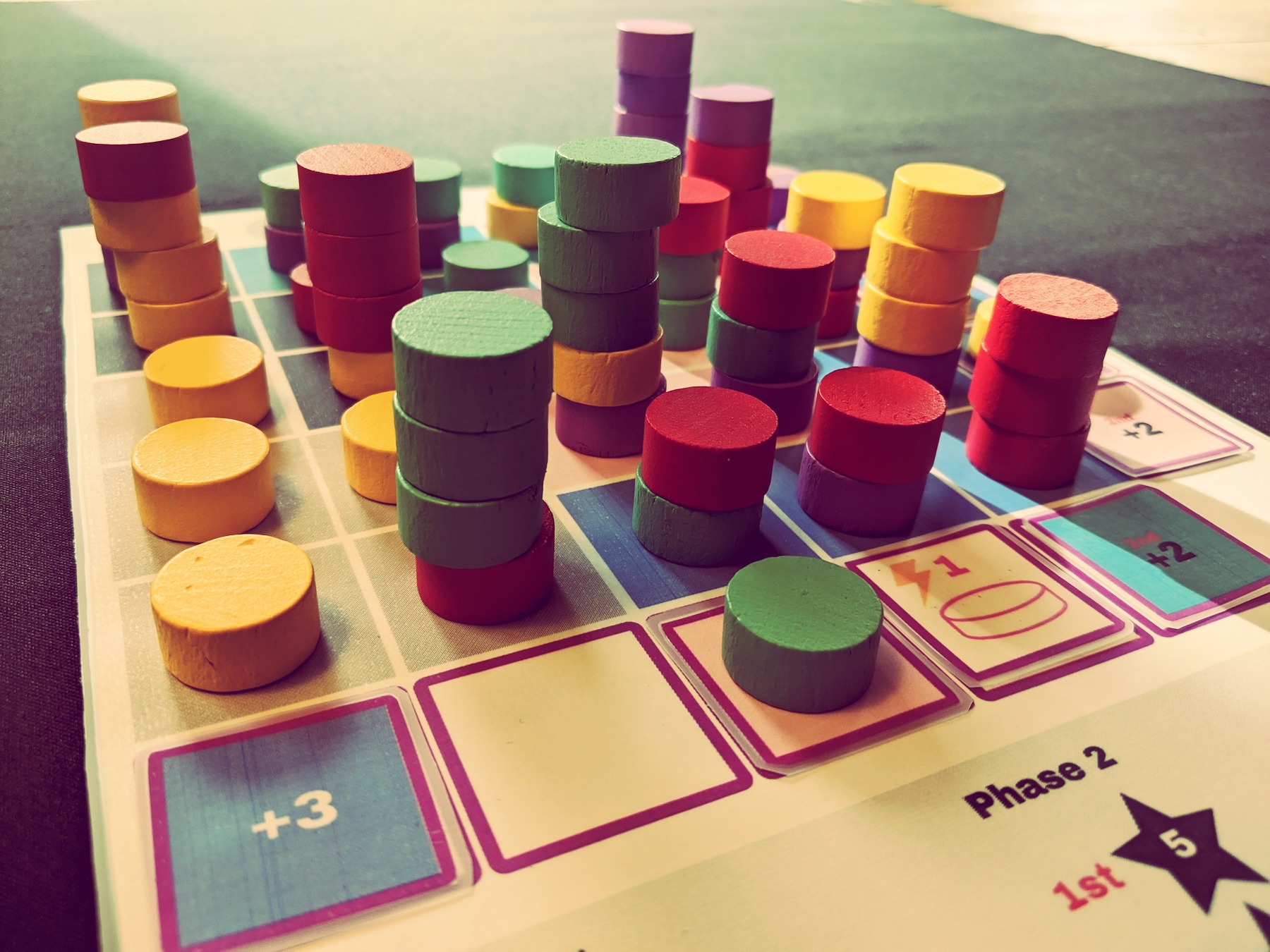 And finally… the new infection game now has tiles that determine the bonus triggered by winning the space at the end of a row or column. These tiles will be laid out randomly, creating different conditions for each stage of the game and on each play. Like Mob Rule, this is an area control game which is ready to meet some playtesters!