It’s hard to play games on a completely level playing field with children. There are games where it is clear that adults have a distinct knowledge advantage: trivia games and word games spring to mind. Most dexterity games penalise the young (and the old), who don’t have such control over their fine motor skills… and games of deduction, like Cluedo and Cryptid reward those with more ordered logical reasoning.

In fact, other than speed games, in which (older) children often have an advantage over their parents, adults have the upper hand for most games. They’ve just had longer to develop their critical thinking skills.

Now, I’m a strong advocate against letting children win, as you can read in this blog, but there are ways you can modify your play, as an adult, to give children a reasonable chance to compete with you.  If you’re keen to level the playing field a little, impose restrictions on your own play.

To illustrate what I mean, let’s look at one particular game – Patchwork. Patchwork is a wonderful 2-player game in which each player has their own board on which they are trying to create a patchwork of tiles.  Here’s how it works…  (If you already know how to play – skip the section in orange).

There is a ‘time track’ in the centre of the table on which each player has a pawn. The path spirals in towards the centre. When your pawn reaches the centre, your game is over. The person whose pawn is furthest back on the track is always the person to take the next turn. So instead of alternating turns, one player may play several times in a row (until they are ahead on the track).

Around the time track is a circle of (randomly laid) tiles. These polyomino tiles – all different shapes and sizes – have different numbers of buttons shown on them: 0, 1, 2 or 3. Each tile has a button cost and a time cost.  There are three tiles available to you at any one time – the next three in the line. You can choose one of these tiles, pay the cost and place the tile on your board.

The currency in this game is buttons. The more buttons you have, the better tiles you can buy. To buy a tile, you must pay the correct cost in buttons and then move the depicted number of spaces on the time track. Some tiles have a high button cost but low time cost, keeping you from moving too far forward on the time track. Others are the opposite – allowing you to gain good tiles for fewer buttons, but forcing you forwards on the track.

Whenever your pawn moves over a button icon on the time track, you acquire the same number of buttons as you have on pieces in your patchwork (tiles on your board). So the better the pieces are on your board, the more income it will generate you.

The time track also has five points at which there are single square tiles placed. The first player to cross this point, takes this tile and places it on their board – filling up pesky holes.

The first player to complete a 7×7 section within their 9×9 grid gets a special bonus tile, which gives them 7 points. When both players have reached the centre of the time track, the game ends, and scores are calculated.

You get 1 point for every button you have at the end of the game, but you subtract two points for each uncovered space in your grid. So, you’re aiming to cover up as much of your board in glorious patchwork as possible, while having a bunch of buttons left over at the end as well.

To be really successful in this game, there are lots of things you need to think about simultaneously.

This game is not complicated to understand, but the threads of strategy add complexity. It’s the multi-layered strategy that makes this game harder for children to compete with adults. Most adults have a more refined ability to think about multiple things at the same time than most children.

So to enable a more even match, limit the number of things you think about. It may sound like it’s easier said than done, but just like your child can improve their ability to strategise, you can improve your ability to focus & restrict your thinking.

In Patchwork, try these different levels: 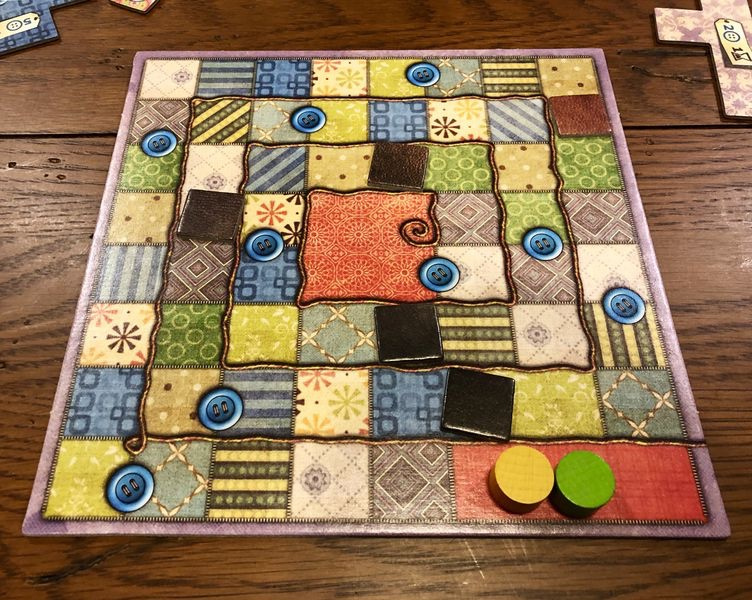 This will broadly mirror your child’s development as they play the game multiple times. So by restricting yourself and what you’re thinking about, you are matching the players abilities more evenly. Let me be clear – you’re still playing to win. You’re just restricting the information you’re taking into consideration.

This works with any strategic game. If you’re not sure how to restrict what you think about, ask your child to explain what they think about, what they focus on. Pay attention to the actions they choose to take and those they ignore, then match your own play to this.

The more games you play as a family, the more the children become less tactical and more strategic, which narrows the gap between the generations. This comes with practice. Pretty soon your children will overtake you and you’ll be up late at night scouring forums for strategy tips because you always lose… take it from me.