How to play Spoons

Spoons is a fun family card game that’s easy to learn and quick to play… but you’ll want to play it over and over. As well as a standard deck of cards, the game requires spoons. The addition of this run-of-the-mill household item somehow elevates the game, giving it a quirky sheen and an air of nostalgia. You’ll realise, just from reading the ‘how to play’ section and watching the video that this game will quickly become a family tradition. Spoons is a good game for young and old, though those with slower reactions will find themselves at a disadvantage. For younger children, this is a good game for practising number recognition and as you only ever have five cards in hand at any one time, they’ll also improve their card holding and fanning skills. All players will enjoy the mad frenzy and the state of perpetual high alert!

Shuffle a single standard deck of 52 cards and deal 4 cards to each player. Players may look at their cards. Place the draw deck next on the right hand side of one player. Place some spoons in the middle of the table – in easy reach of all players – ideally equidistant from each person. You will need one fewer spoon than the number of players in the game. So if you are playing with 5 players, you will need 4 spoons, for example.

The player with the draw deck on their right draws a card, which they add to their hand. Then they quickly choose a single card to discard, passing it to the player on their left. As soon as they have passed the card, they pick up a new card from the draw deck and repeat.

Other players each wait for cards to come their way. Whenever they are passed a card, they add it to their hand, and quickly choose a card to discard – passing this card to the player on their left. Everyone passes whenever they are able to and as quickly as possible. There is no need to pass cards simultaneously. So all players are looking at cards and passing them.

The player to the right of the starting player forms a face-up discard pile on the table rather than passing cards back to the first player.

Each player is aiming to create a hand of four cards of the same number. When one player has managed to do so they shout “Spoons” and all players immediately try to grab one of the spoons in the middle of the table. All players except one will manage to grab a spoon.

There are a number of different ways to score Spoons. You can play using ‘player elimination’. In this case, the player with no spoon is out of the game. The remaining players continue with another round with one fewer spoon – a la musical chairs. This would work really well in a big family group where your aim is to quickly crown a champion. But we have the age old problem of players who have been eliminated sitting around and watching, not taking part. So I’d usually advise to steer clear of this version. Instead, start with 5 points each and when you end up with no spoon, lose a point. Or give spoon-less players a point and end the game when you wish – the player with the fewest points wins.

It’s a mad romp. Very light and not at all taxing on the brain. So if you’re looking for simple family fun, you might really enjoy this one.

We specialise in creating original family games. You’ll find our Online Shop packed with options! If you enjoy quick family games but like a lot of variety, you’re bound to enjoy the Dark Imp coaster games. Six games on coasters in a little pack.

Get the Coaster Games
Browse the Shop 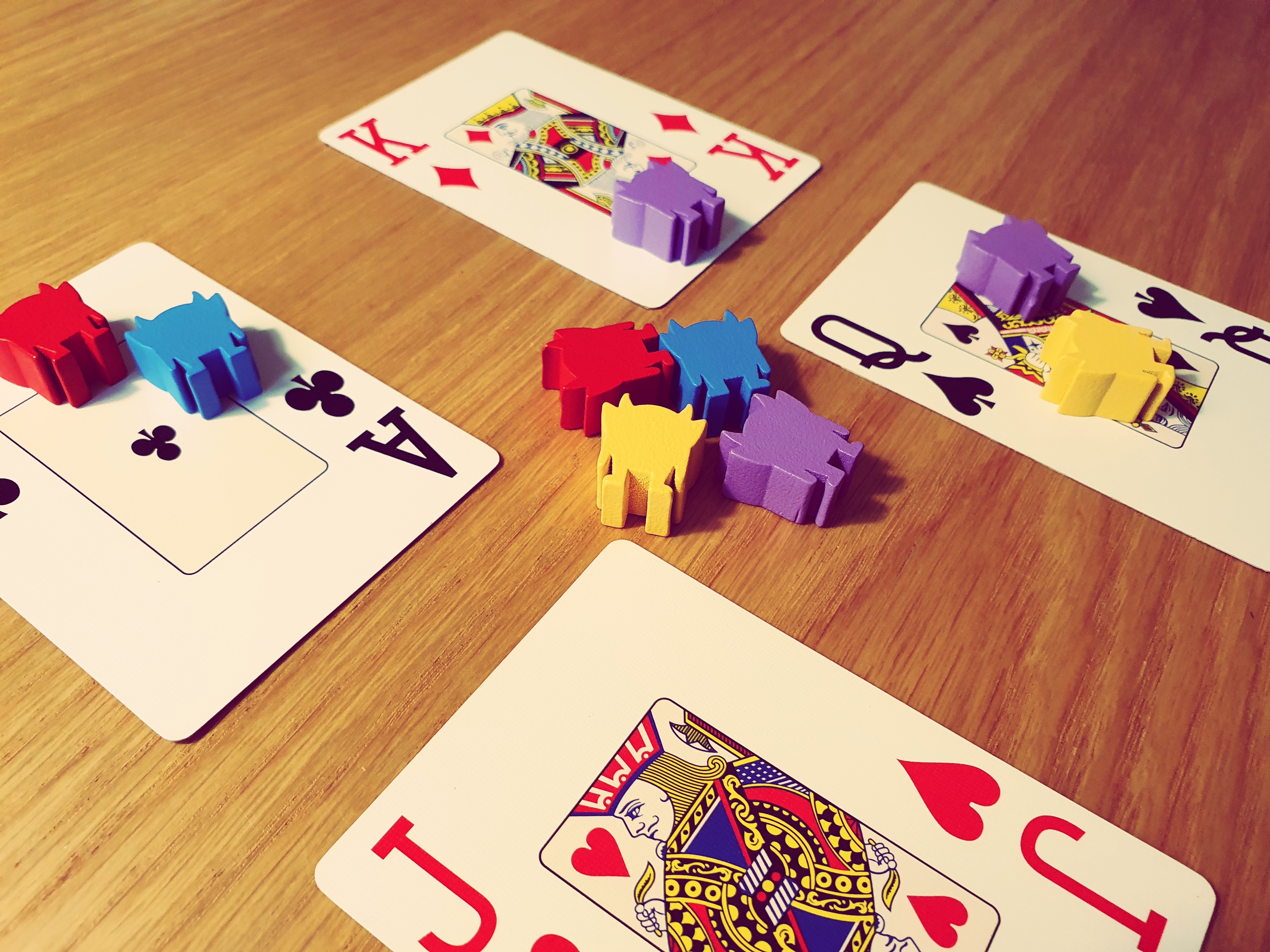 In The Dark Imp Blog you’ll find all sorts of games you can play at home with regular playing cards or just with pen & paper. If you’re looking for other great games to play with the family, try Newmarket. It’s a game of luck and betting on horses.

How to play Newmarket
More Games to Play

Video: How to Play Spoons

This ‘How to play’ video is one of the most watched videos on The Dark Imp YouTube channel. Subscribe to the channel to see new videos as soon as they come out.