What is a tile placement game?

In this blog: Ellie explains what ‘tile placement’ means in board gaming.

Each month I’ll share a blog in which I explain one board-gaming term. This month we’ll look at tile placement, which is also known as tile laying. In tile placement games, players add tiles to a tableau to build it up over time. During the course of the game the tableau grows – allowing the players to access benefits, score points or gain control.

What kinds of themes will you see in a tile placement game?

Many tile placement games revolve around building up some sort of landscape or place, and tile placement is a perfect mechanic for this type of theme. Adding tiles to a growing landscape really makes you feel like the architect of an empire. The areas could be a garden or woods as in Indian Summer, a town or city as in Quadropolis, a realm as in The Castles of Burgundy, or even a planet as in Terraforming Mars.

Network building tile games are common. In these games tiles contain part of a track or route. When placed together players may travel along the routes. Maglev Metro and Tsuro are great examples of this.

There’s also a whole tranche of abstract tile placement games – these are games with no theme or possibly just a suggestion of setting. These games usually provide players with an interesting puzzle to solve – how to fit the tiles into the space as in Patchwork, how to place certain tiles next to others as in Qwirkle, how to set up scoring situations as in Nova Luna and how to prevent other players from taking tiles you want as in Azul.

But there are tile placement games with other themes. In Bärenpark, players build their own bear parks, in Shakespeare players build up a stage set and in Newton and Atheneum: Mystic Library players place books on shelves… and there are many many others. 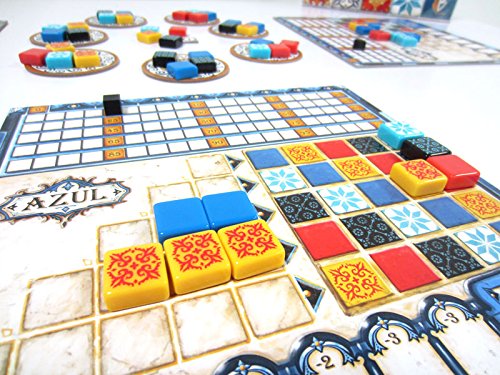 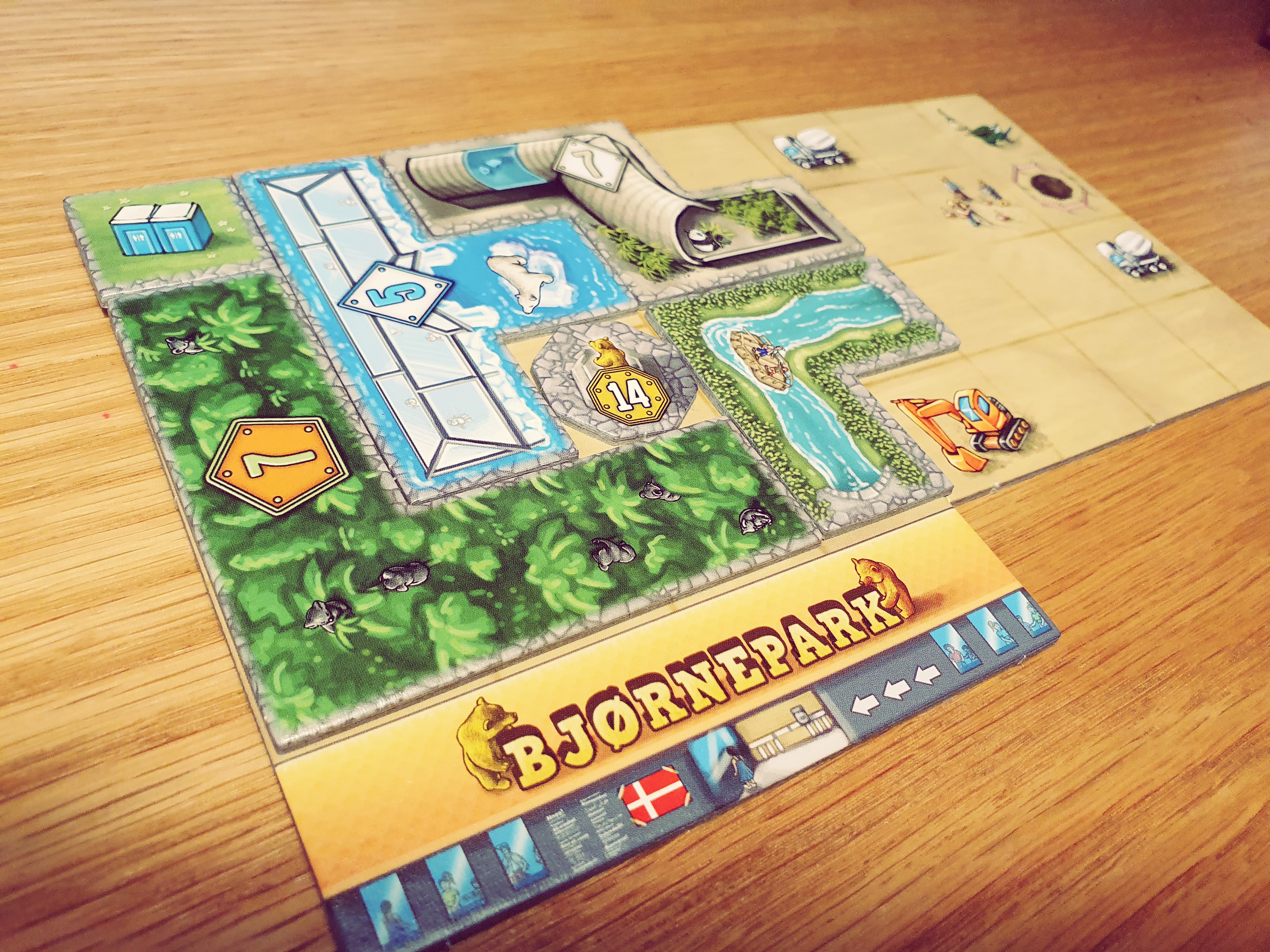 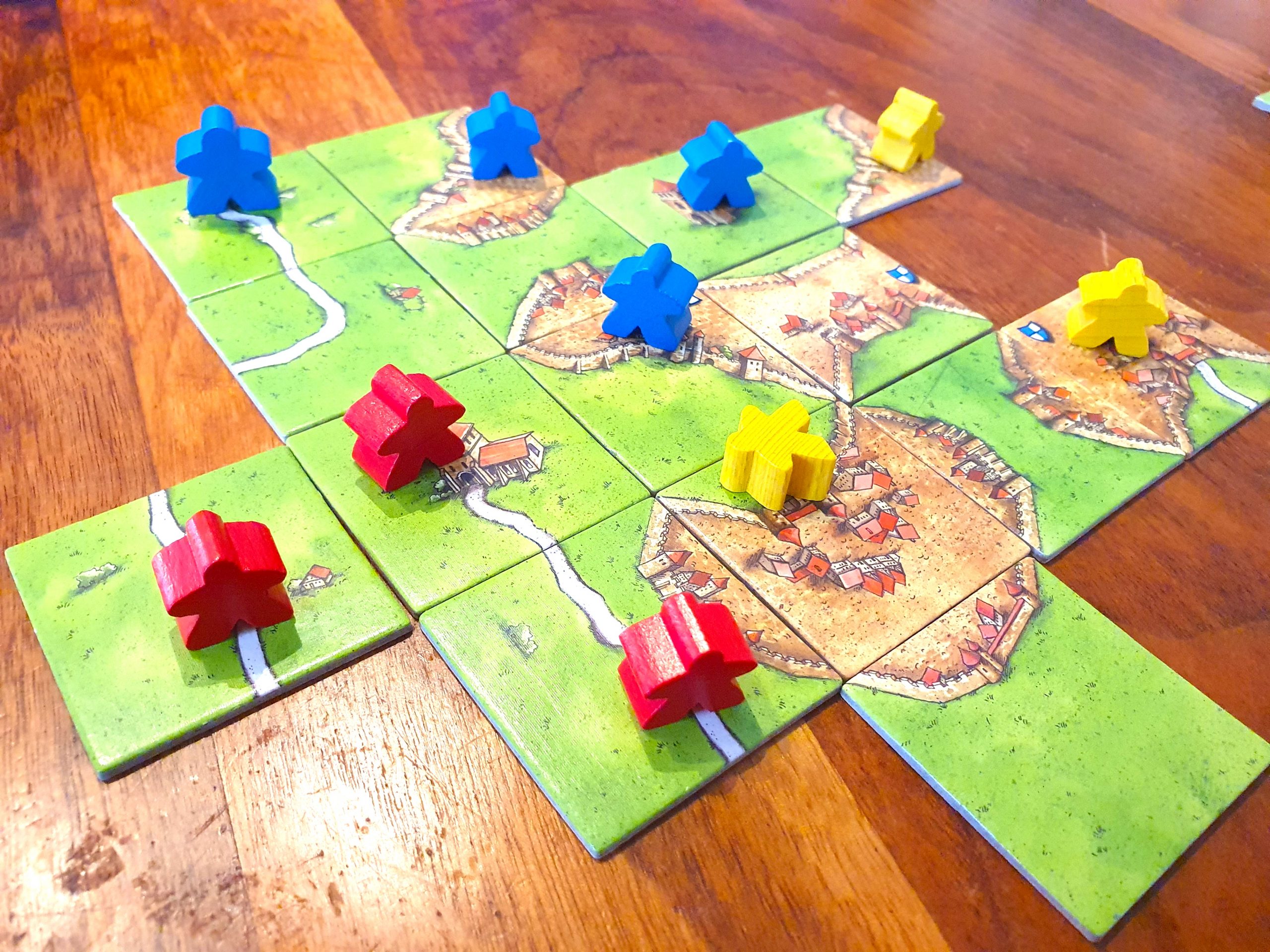 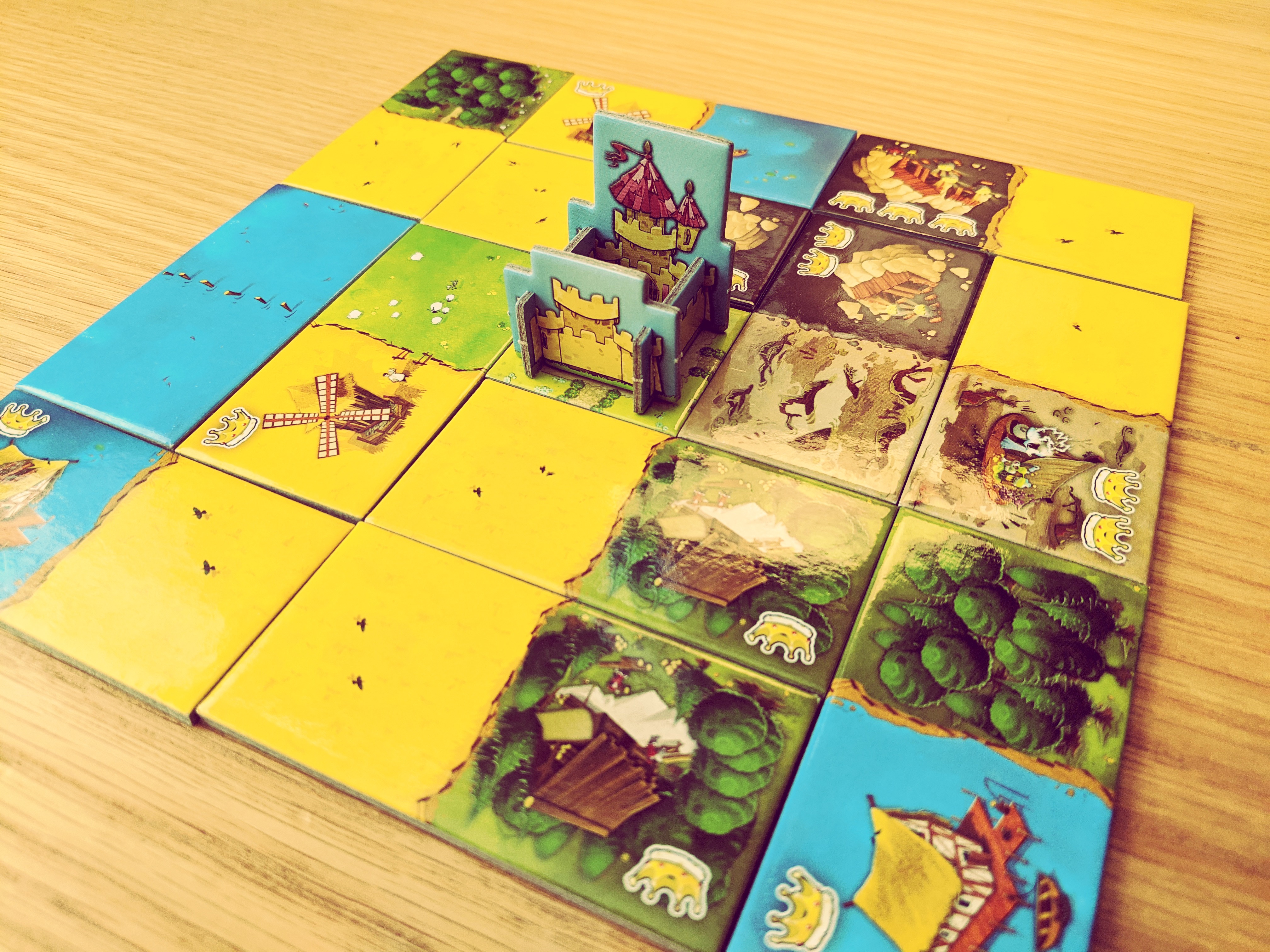 Some games have players all contributing to one main tableau. Each time a tile is placed it’s added to the central area. In these games, players can affect the moves their opponents may play. Other games have players each building up their own personal tableaux. Here players can’t usually mess with another player’s area, but there will be competition over tiles or competition over the ways to win these tiles.

In Carcassonne, players all contribute to one growing realm which eventually sprawls over the entire table. Players pick up just one tile on their turn but have free choice over where to place it. They can create or extend roads, cities and monasteries that already exist on the board, or complete these to score points and reclaim a meeple. Or they could choose to reduce opponents scoring opportunities by placing tiles that prevent their manned cities or roads from being completed or by merging fields to combine farmers.

Kingdomino is also a realm-building game, but here each player is working on their own realm. Players only compete over available tiles. Kingdomino is simple enough to see at a glance which tiles other players might need, so you can employ ‘hate-picking’ tactics should you choose to do so. Players can force opponents to take tiles that won’t score them many points or that they can’t place. However, most of the time, players will concentrate almost entirely on their own tableau, reducing the interaction between players (and making them quite a good bet for argumentative families!)

Tile placement is a mechanic that’s rich with variety. It could be that the position of the tiles within the space is critical. When tiles are placed on a board, covering up certain areas may trigger special effects or win you points. For example, in The Magnificent, players cover up their personal grid with different shaped tiles to access bonuses which will help them in different areas of the game and ultimately score them points.

Alternatively the tiles’s position in relation to other tiles may be important. In Nova Luna, my favourite pure tile placement game, players need to surround tiles with others of certain colours to score. Each tile placed could trigger neighbouring tiles to complete objectives and vice versa. As well as trying to complete objectives quickly, you’re ideally setting yourself up for a wave of success in future turns.

Polyomino tiles – like Tetris pieces – can be used to focus the puzzle on tessellating the tiles themselves. Usually this is about creating as few gaps as possible – gaps triggering penalties or slowing down progress. In Cottage Garden players aim to fill up gardens with flowerbeds on different polyomino tiles and as soon as a garden is complete it may be scored. But acquiring tiles to fit your ever decreasing and awkward spaces can be tricky, so sleeping cats may be used to fill in individual spaces. 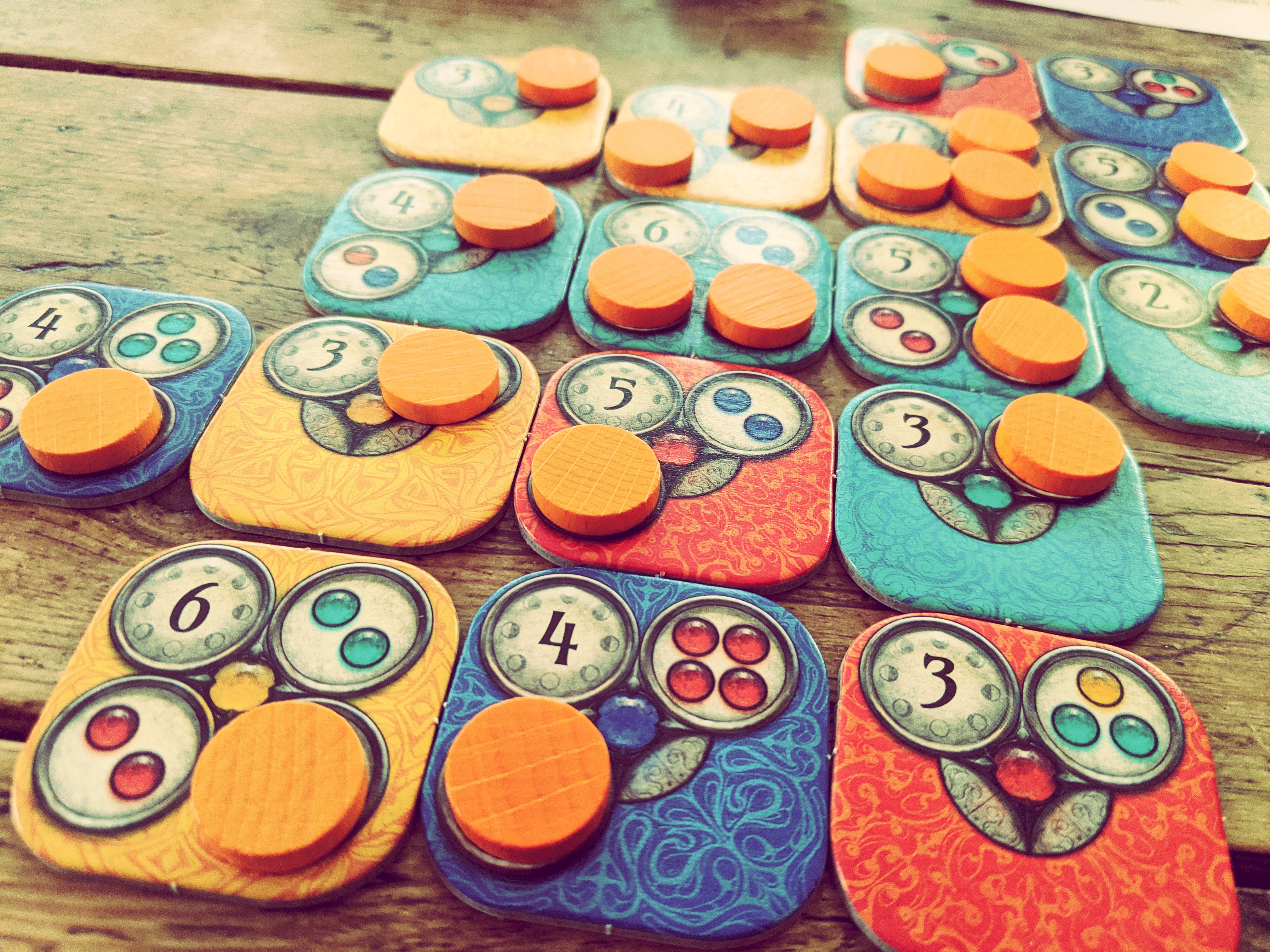 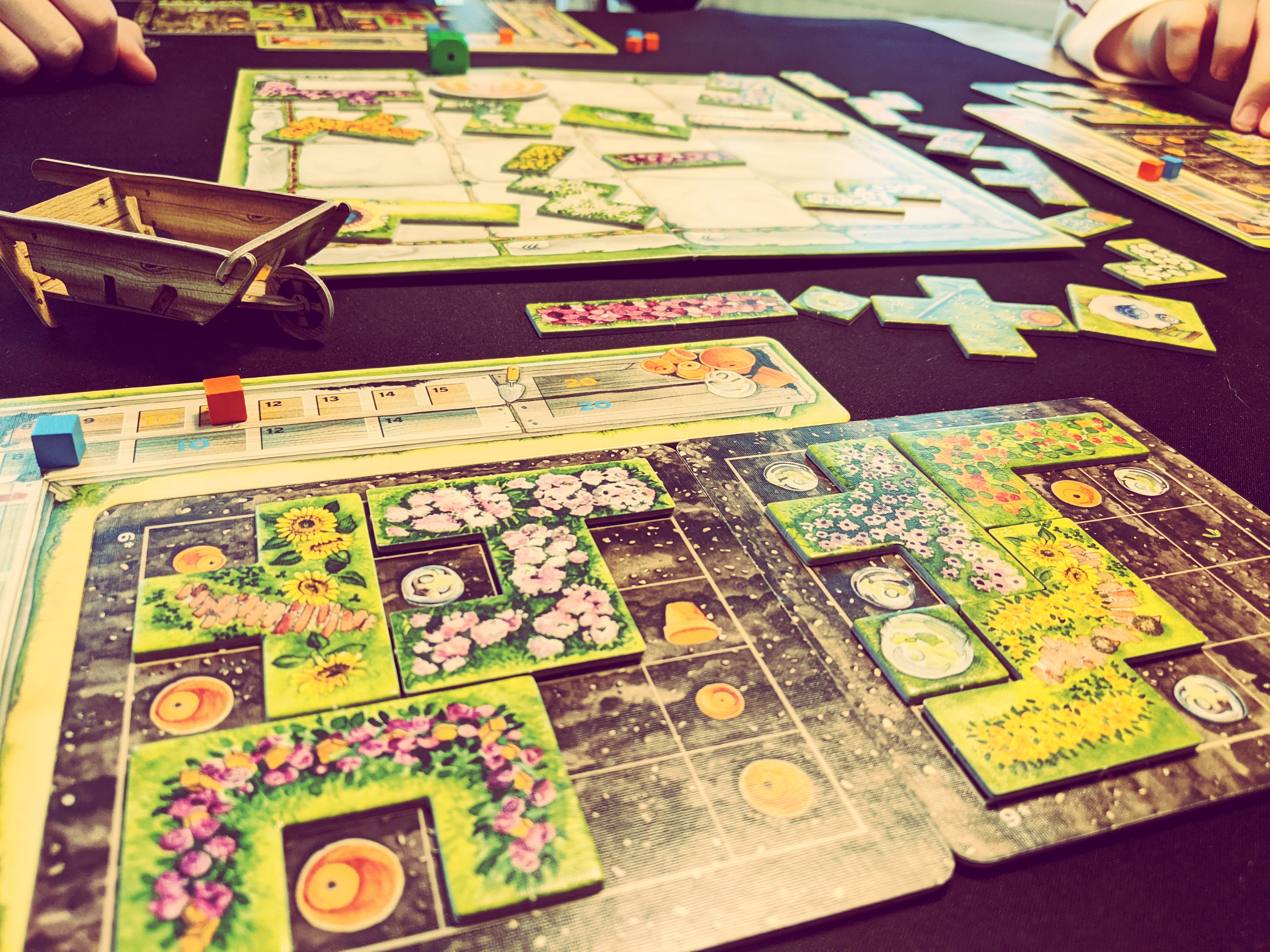 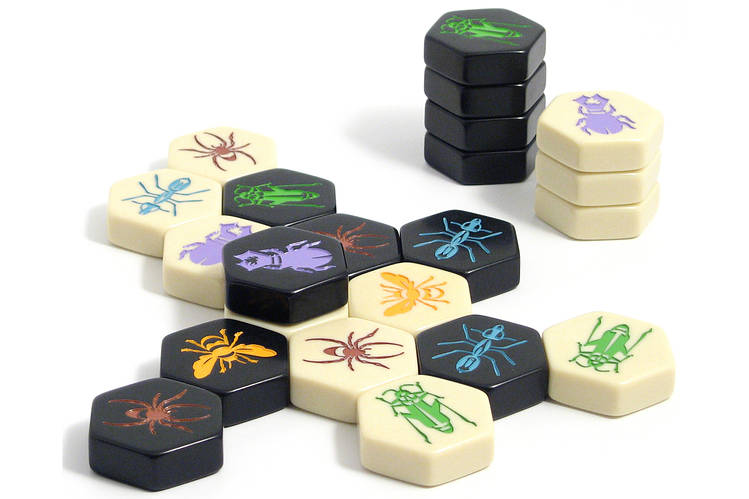 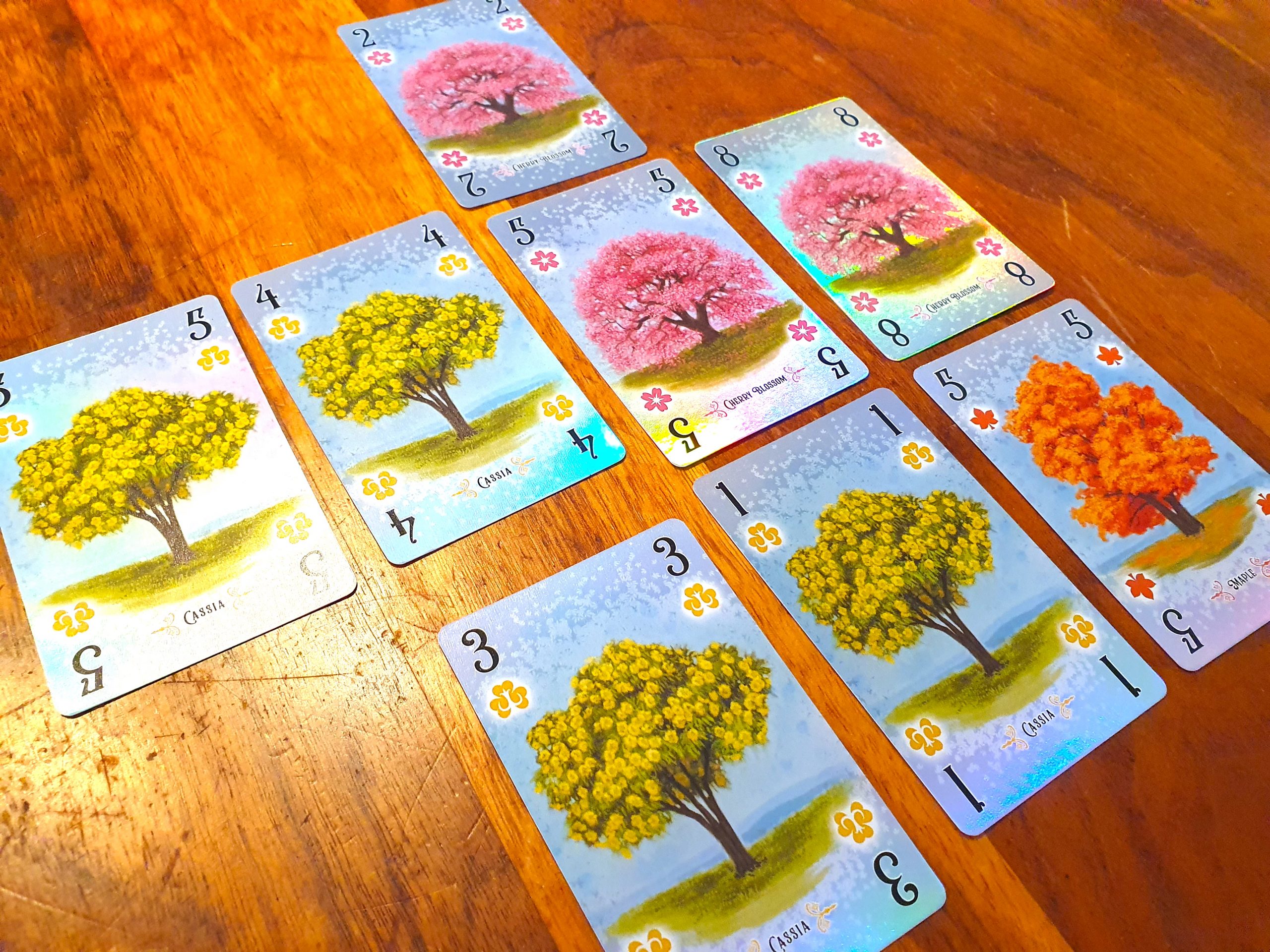 Is this a tile placement game?

Hive is officially a tile placement game. It has tiles and you place them. However, it works more like other two player strategy games (e.g. Chess). Once placed, the tiles can be moved. The board is constantly changing, the tiles are not fixed, unless they are surrounded by other tiles and cannot move. Almost all tile placement games tether the tile to the spot. You’re making a decision about where the tile goes, what it goes next to and what orientation it is… and that’s a permanent decision.

The tiles in Hive could be made into figures or miniatures but they’d still need a hexagonal base. Unlike Chess there is no board in Hive. The position of the insect tiles are crucial in relation to each other – they fit together. With a hex board you could do away with the tiles and create insect figures – you’d have the same game (providing the board is big enough) – with absolutely no tile placement element. But it isn’t created that way. So is it a tile placement game? I don’t think so.

A contrary argument could be made about card games where players place the cards in a tableau – like Arboretum. To all intents and purposes these are tile placement games with cards instead of tiles. We may call them ‘card placement’ but we’re wandering into pedant territory. To my mind, this is absolutely a tile placement game.

As tile placement is probably my favourite mechanism, it’s not surprising that I’ve used it in my own games. In Gnome Grown players use workers to select tiles in three different sizes to place in their garden. The three tile types are acquired in different ways and by taking different actions. Players are attempting to create combinations of these tiles in different areas of their garden to meet objectives on personally held cards. One tile can straddle multiple areas and could be used to meet multiple objectives. Curating a hand of complementary objectives is an important part of the strategy. Once placed, tiles cannot be moved, even though you’ll most certainly wish you could.

I’m also developing an abstract tile placement game in which players draft tiles to place in their grid and on their scoring track. The tiles on the scoring track indicate the shapes that will be scored this round. Each round these tiles move up, scoring more points. When the top tile pops off the end of the scoring track it’s placed on the board. One tile may be rotated each turn. In this (as yet unnamed) game, the puzzle centres around how you orientate and position the tiles in order to score as much as you can this round and set yourself up for future rounds, without scoring too many negatives for shapes at the bottom of your scoring track. 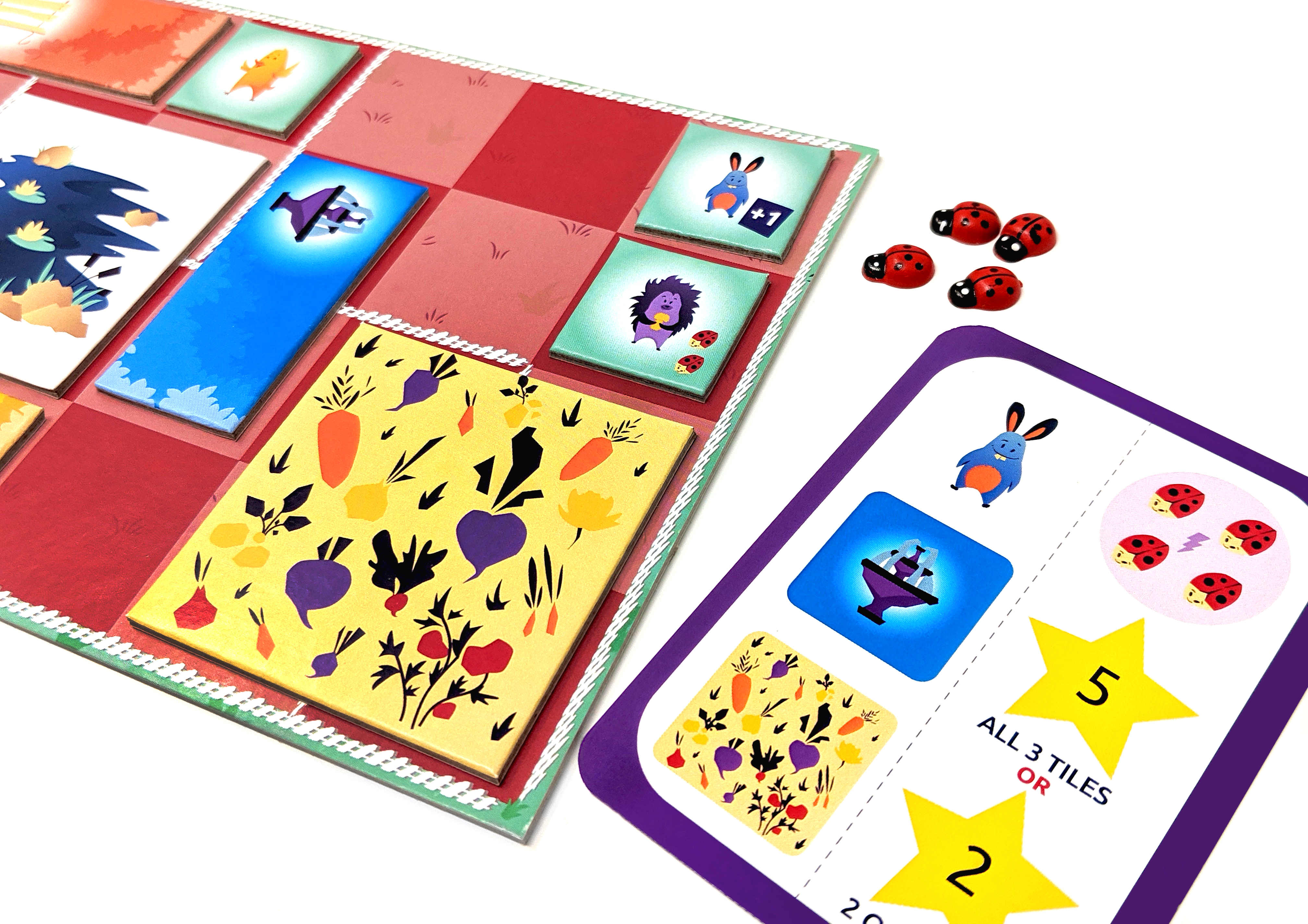 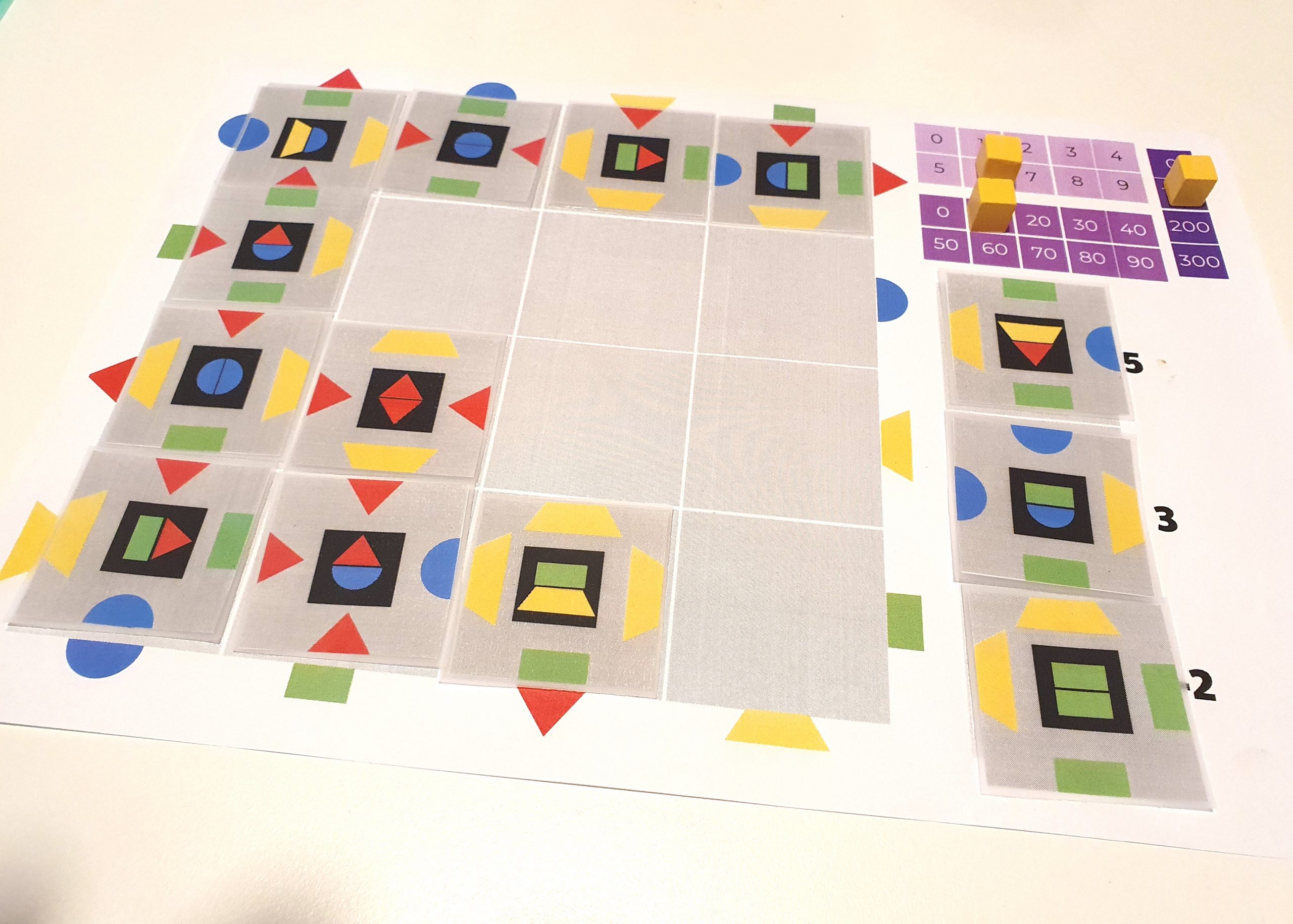 Please comment below with your views on tile placement games. They don’t work for everyone – but will really suit those who love a visual/spacial challenge. Do you love them or hate them? What are your favourites?