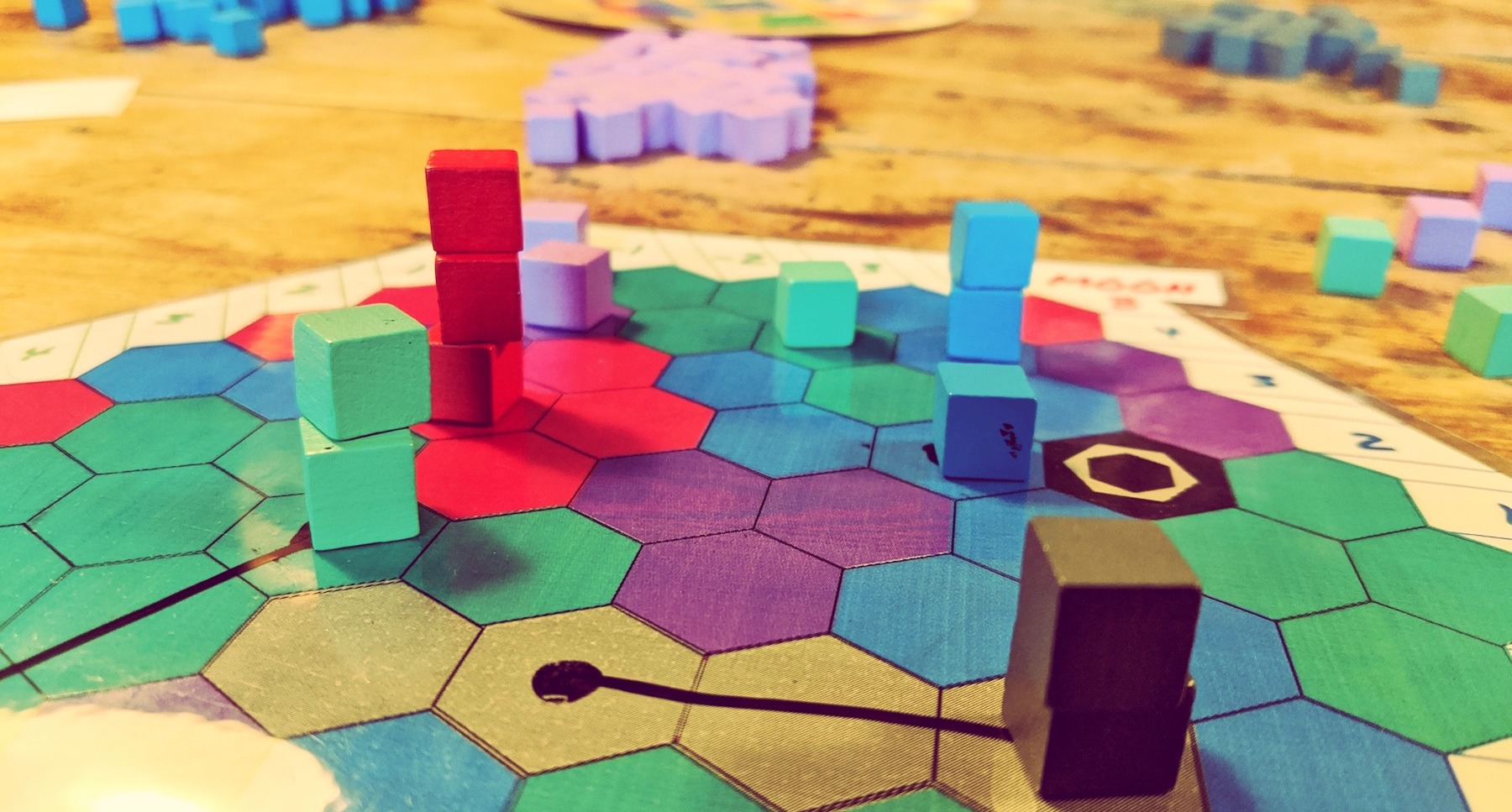 There have been playtests galore this week. Uranus! is a cooperative network-building game in which each player aims to move her alien race from her home moon (which is under attack) to a safe place on Uranus. This is going to be the main game within BuzzleBox 3 and is in the final stages of playtesting. When players are experienced at the game, they will pick a random combination of different boards and cards that together will make up their moon, the resources they have available, their special abilities and their personal secret objective. But when players are just learning the game, there will be starting combinations they can use that will give them the best opportunity for success.

I’ve been testing the starting combinations out this week on new players. In the 4-player test, three of us managed to escape to Uranus, while the fourth player sadly perished on his exploding moon. In the 3-player test, however, we all escaped early. Too early. There was one particular race that was clearly overpowered, but with a small tweak it would have taken us 4 extra turns to win, which would have subjected us to several more attacks – massively reducing our chances of success.

It also became clear that tweaking some of the language would really help players to understand the story and visualise the task at hand much more clearly. So ‘hubs’ are becoming ‘mines’, ‘routes are now ‘tunnels’ and ‘black holes’, which was a stupid name for a feature on a moon are becoming ‘volcanoes’. During every turn, each mine produces a resource. These resources can only be used together in combination if the mines are connected by tunnels. It’s hard for players to remember this, so I’ve added a ‘transportation phase’ where players stack up the resources in each network of tunnels on one hex. This will help new players to remember to use these together. So all in all, very positive playtests. This one is getting close! 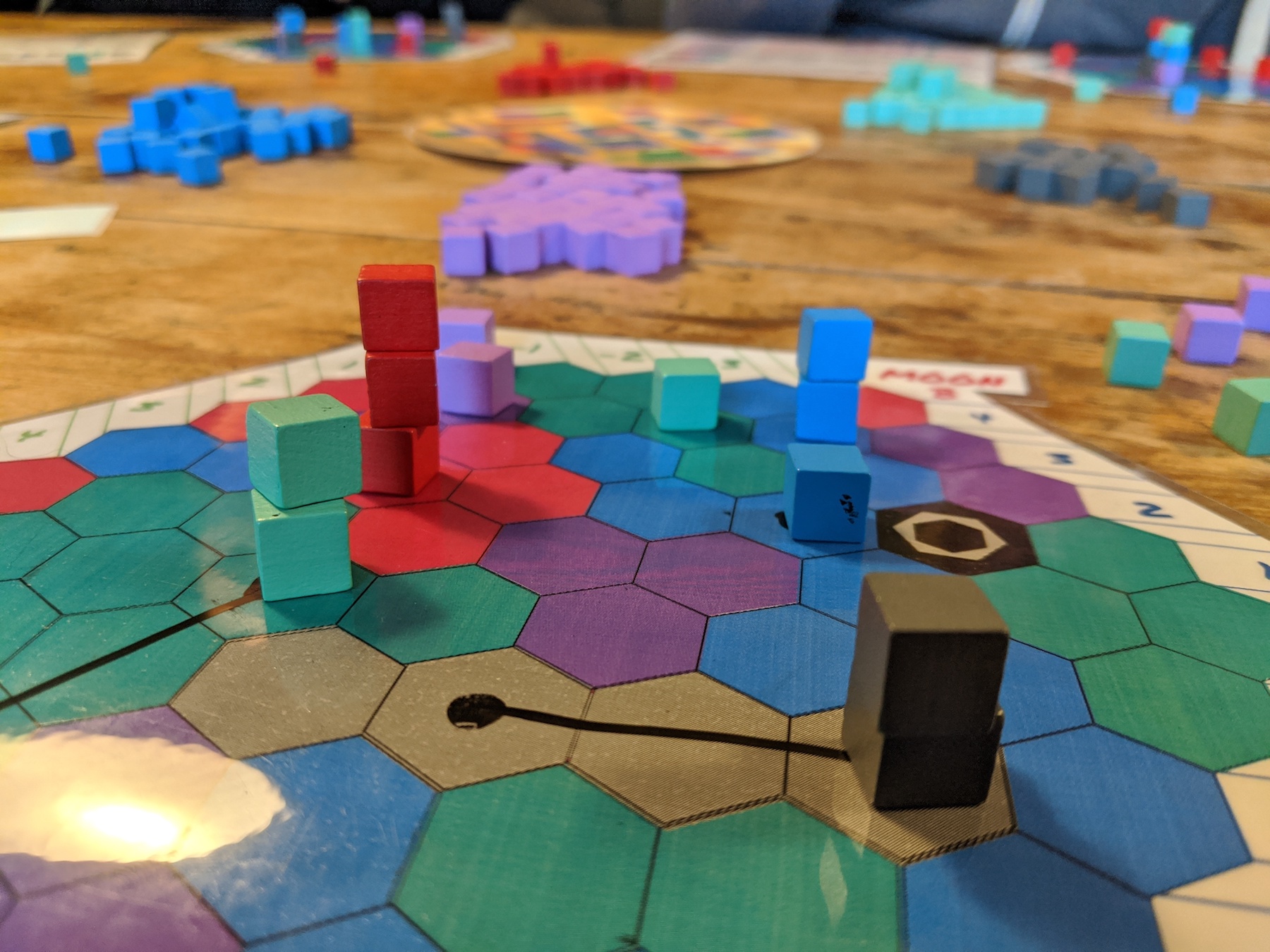 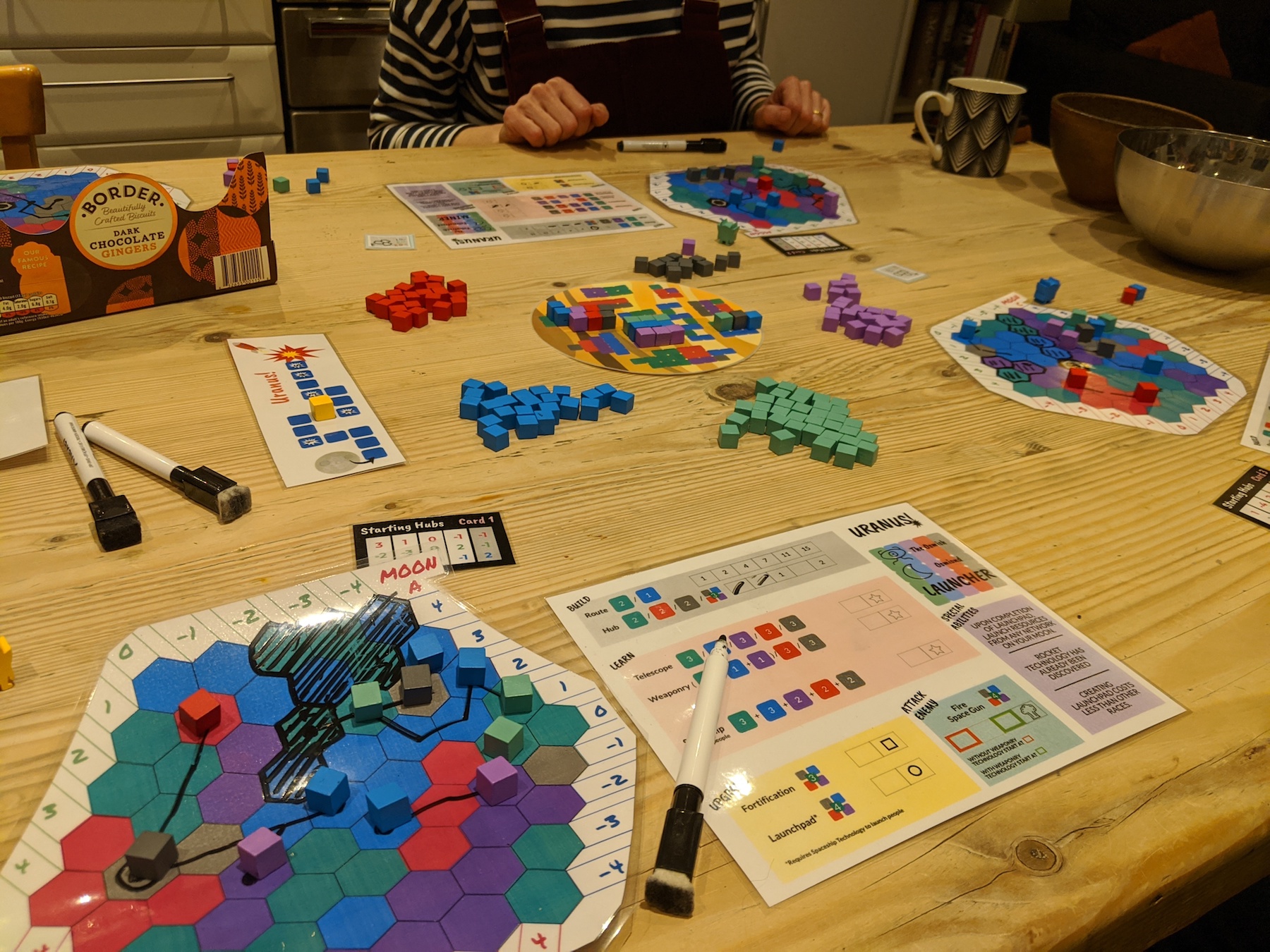 The six cracker games have all had further playtests this week with the London PlaytestUK group. These games are designed to be played at Christmas and are contained within six crackers. The components are used in different ways for each game. Each game lasts 10-15 minutes and is quick and easy to learn. All of the games worked really well, which I’m thrilled about. One game which involves players voting on the outcome of an imp race needs some adjustments to the way the imps move. It was too easy to get your own imp to win the race and too punishing to try to pull others back. But I think that is quite an easy fix. I’m keen to see how these games play with 6 people, so the next step is to get a group of 6 to test them. 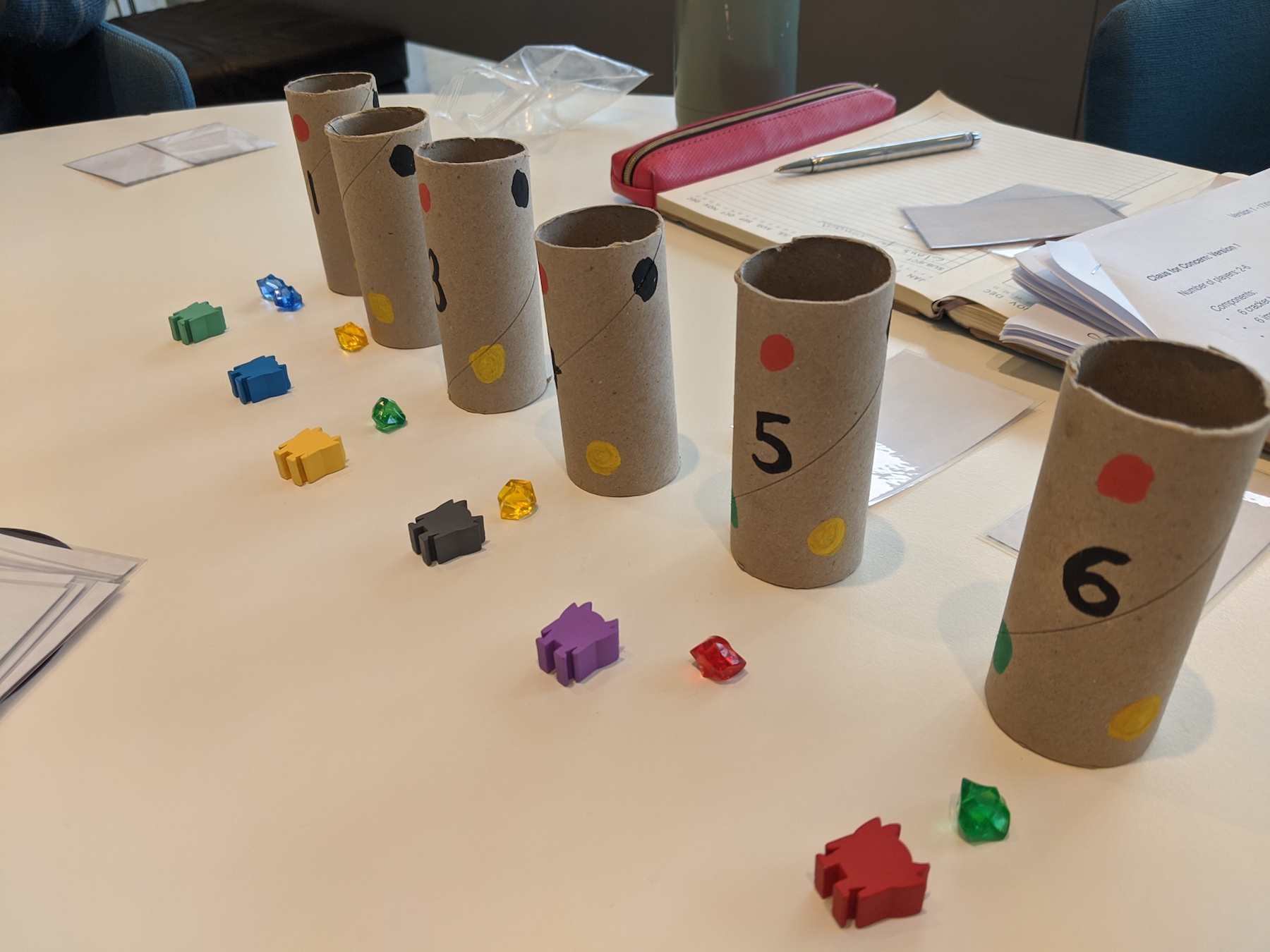 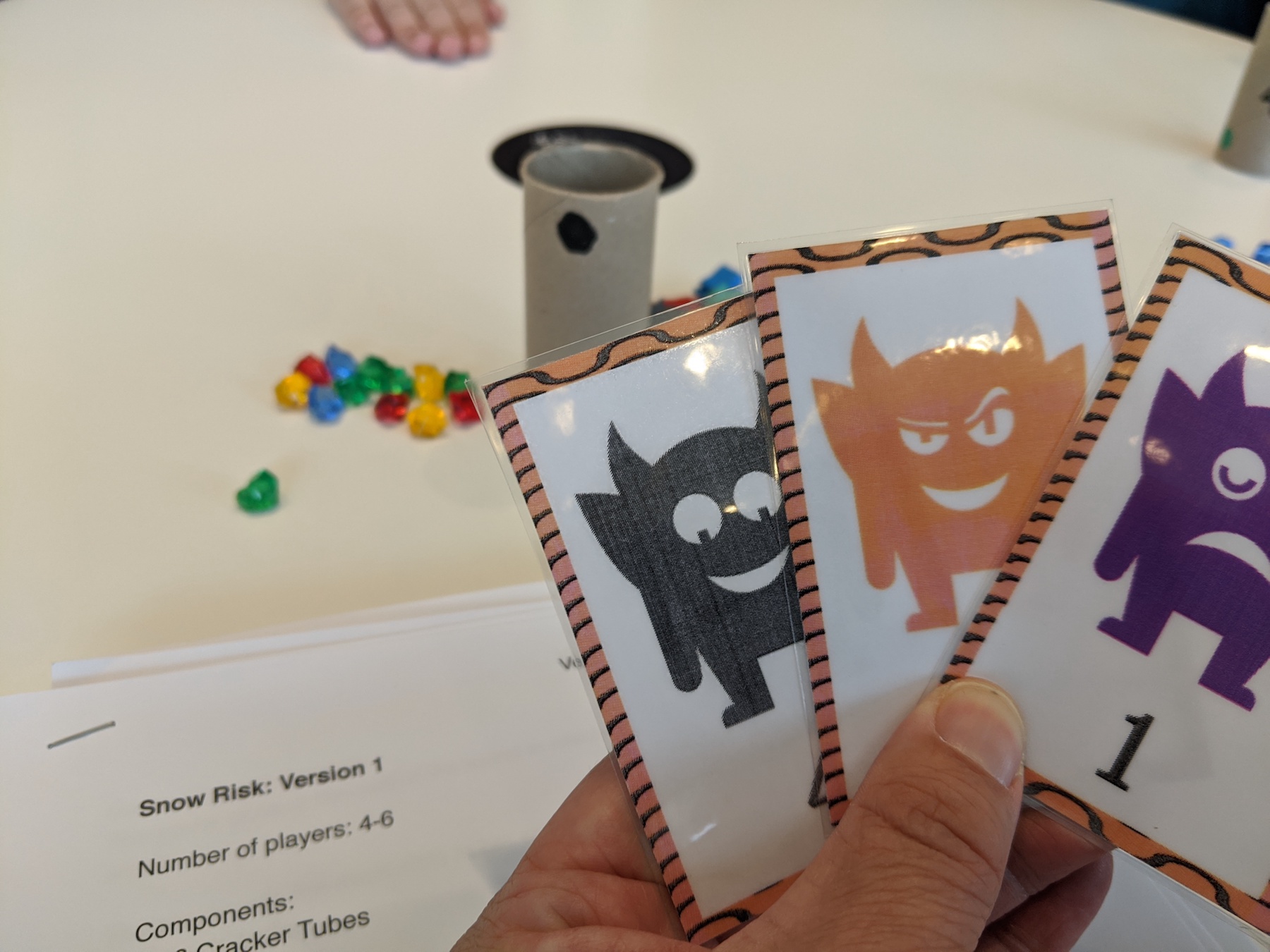 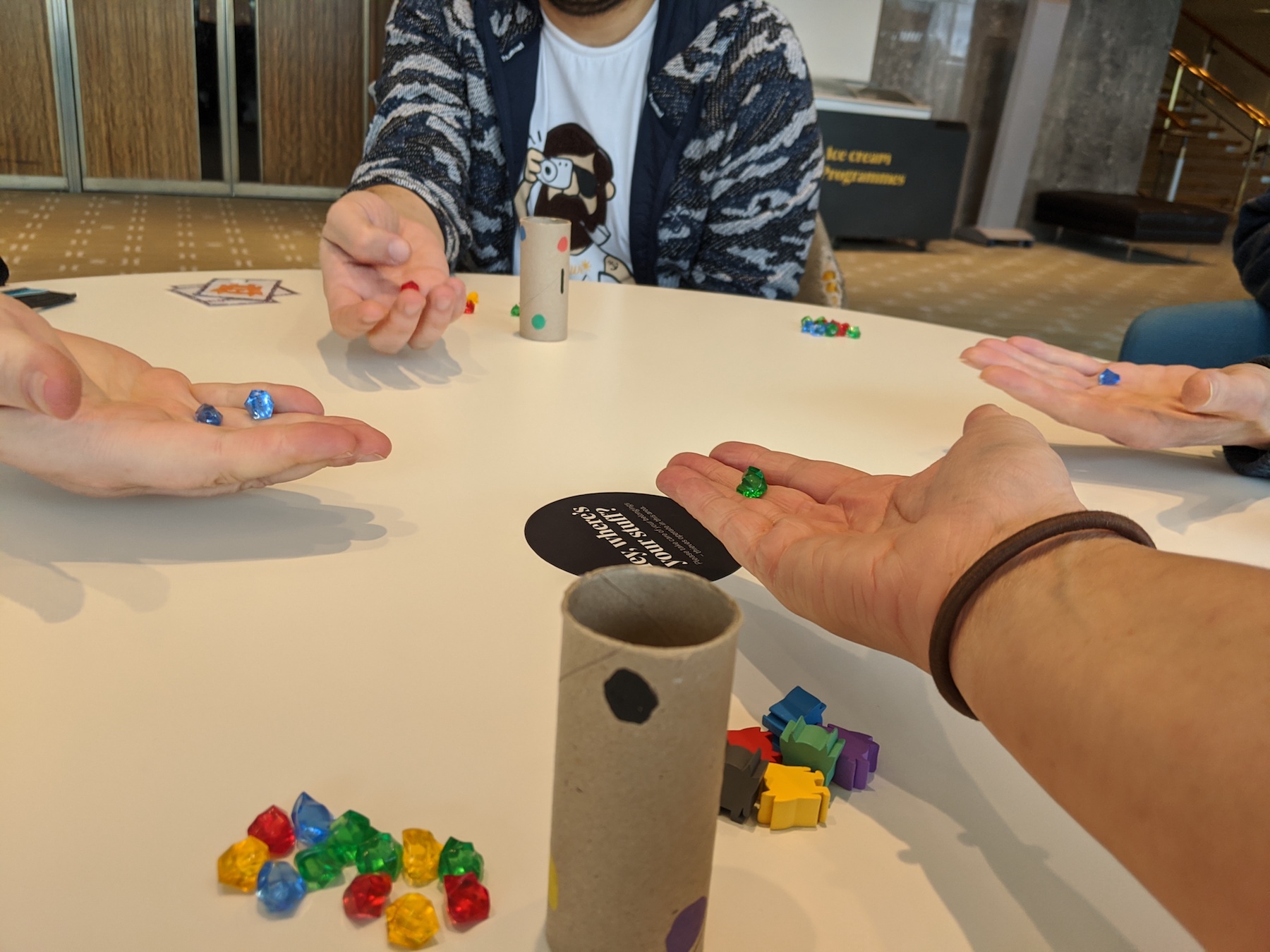 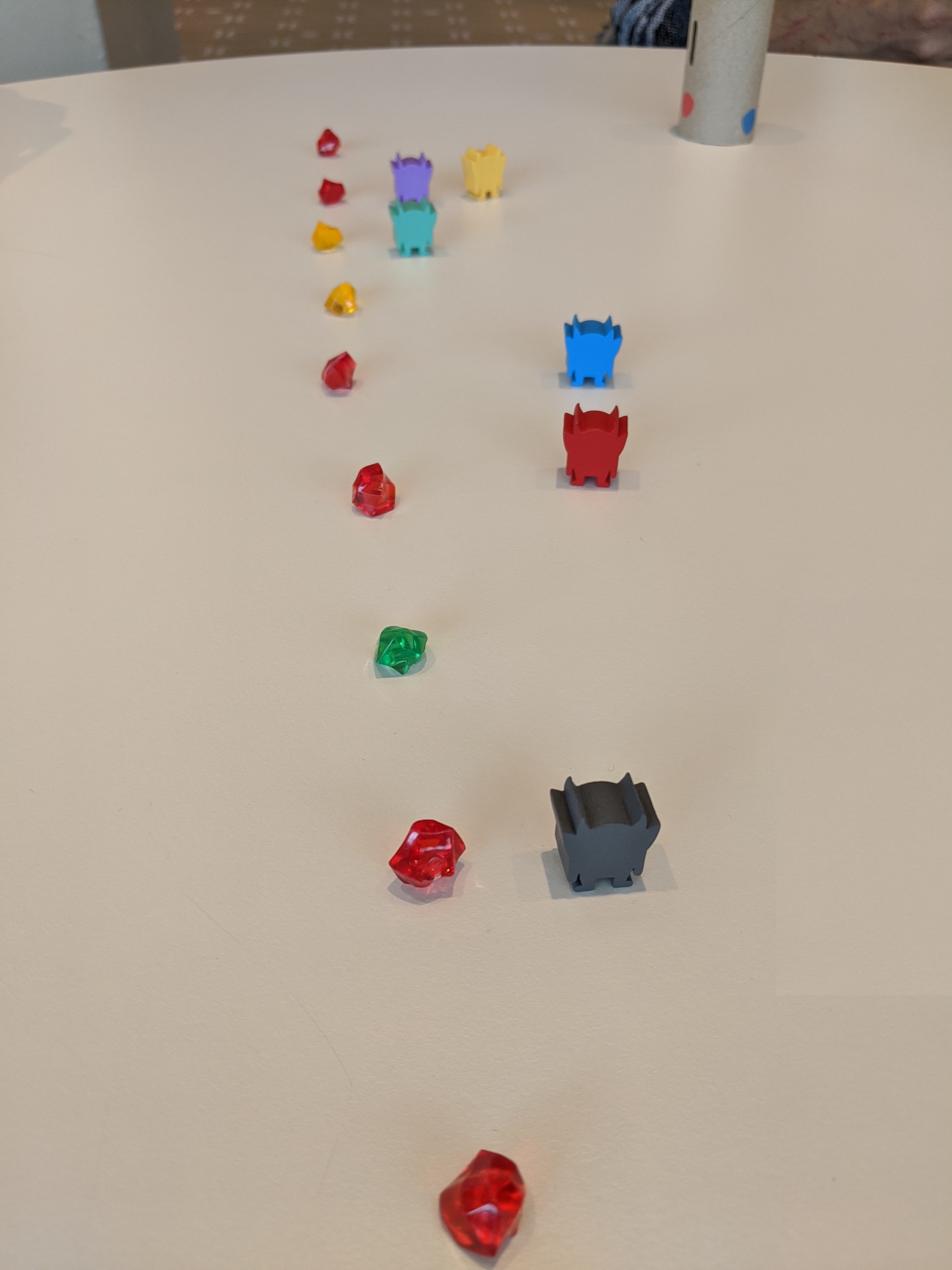 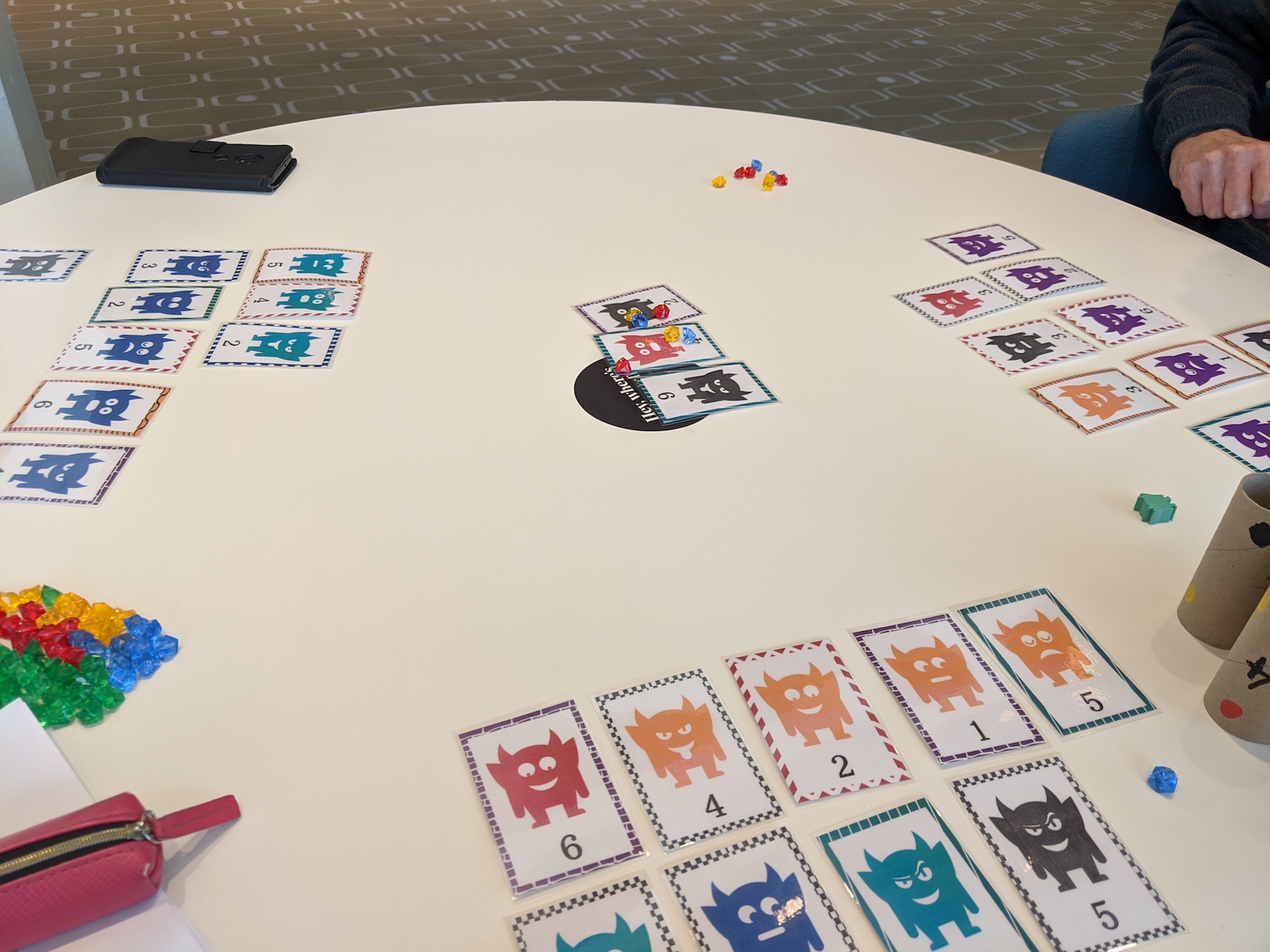 In the cake-stacking game, Top Cake, players bid for different layers of cake. The first player has a disadvantage because they can’t see how other players after them will bid.  This week I’ve been experimenting with various ideas about how to offset this disadvantage by giving the current first player something in return. Many of these ideas came from my good friend and fellow game designer, David Brain. David creates the puzzles for the BuzzleBox. The first suggestion gives the first player on each round a higher bidding card than the others. So while each player has cards 1-6, the first player has 1-5 and a 7. This worked well, but remembering to switch out bidding cards when you are first player may be a bit clunky.

The final suggestion, which works the best, is that the first player card is worth an extra half a bidding point. The first player gets one final bid in which she can use the first player card. This half point is potentially enough to break a tie, or snipe the lowest bid for a cake in which a player has played a ‘reverse’ card, causing the lowest bidder to win. There is also the advantage that nobody else has a half point card, so this will never be duplicated. Duplicated cards are removed prior to bids being calculated. The half point will always count. This is the winning suggestion and will be implemented in the game. Top Cake will be in BuzzleBox 2, coming out towards the end of February. 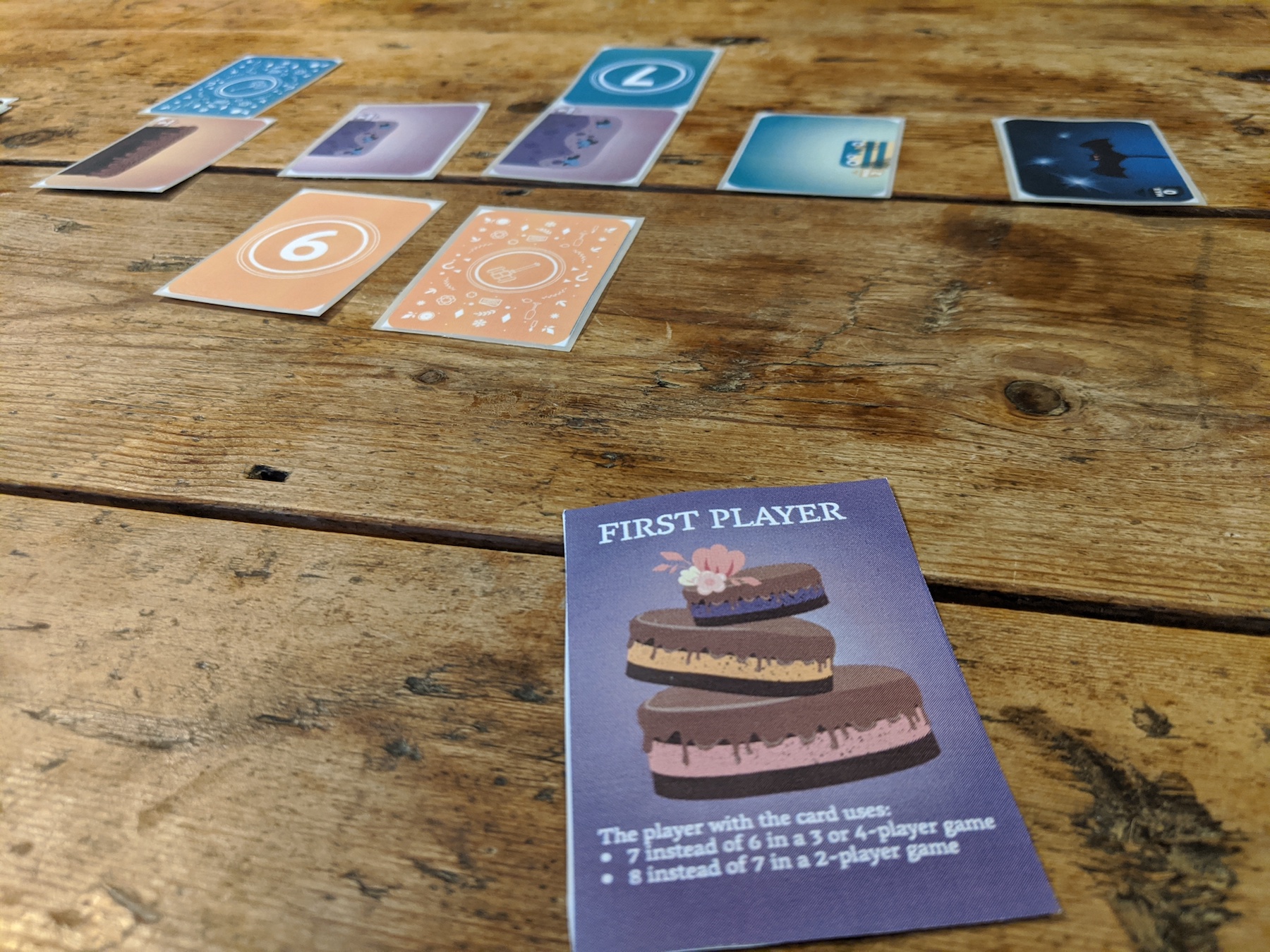 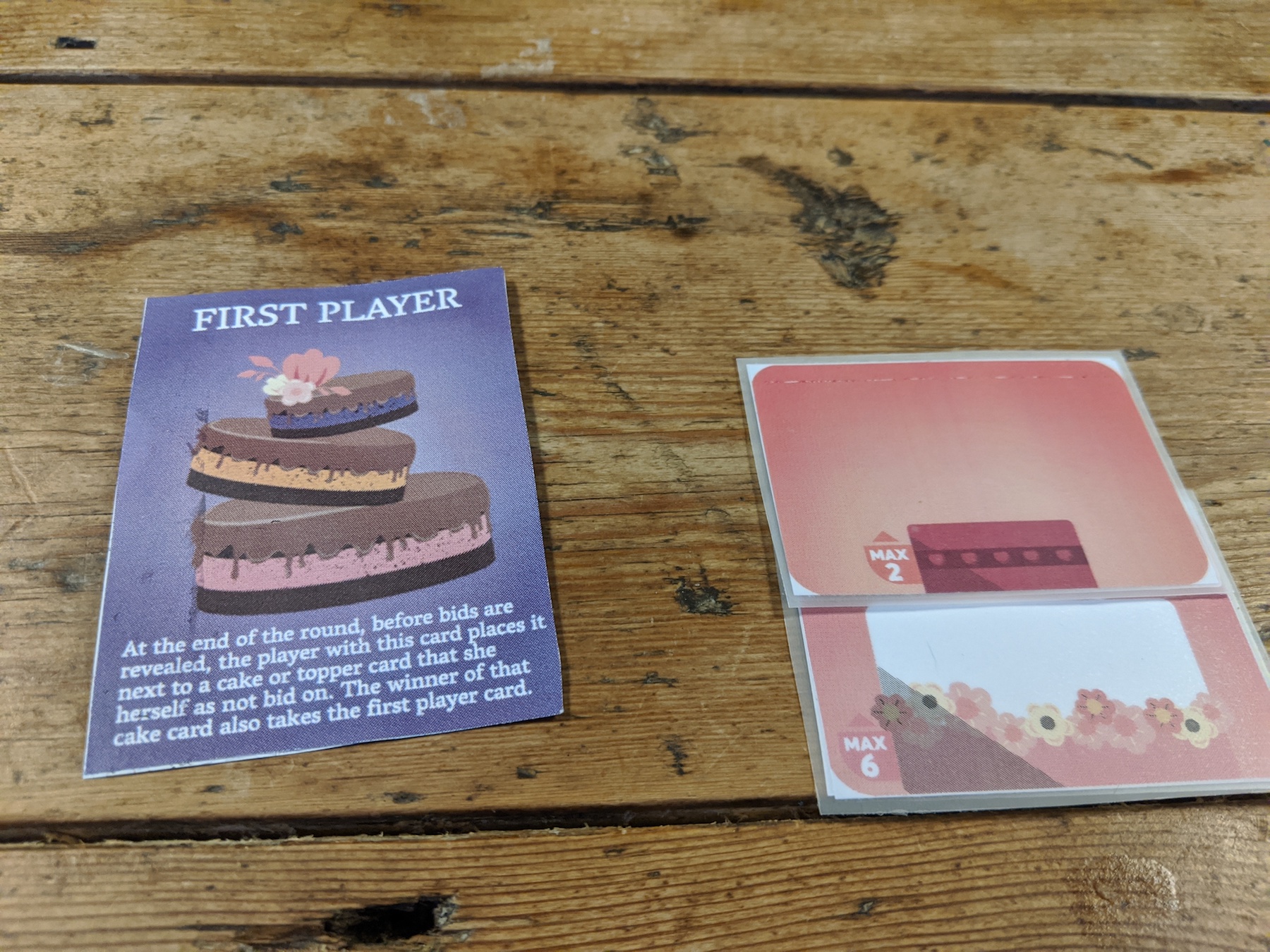 At some point in the next 12 months, the first Schools BuzzleBox will become available. I’ve been working on a larger group game to go in Box 1. The game, whose working title is Veg Trader, is a trading game in which players buy and sell fruit and veg to try to make the most money overall. Players can trade with the ‘bank’ – buying and selling at the current prices. Or informally trade with each other. The prices of fruit and veg fluctuates according to the trades made. I played the game with my boys, my mum, my sister and her family.

It was total chaos.

There was no fixed order to people trading, so there was a fight to get into line to do deals. There was a lot of noise as everyone tried to get my attention. The kids kept cueing up, but my 82 year old mum preferred to stay seated in her chair and shouted ‘Wood pigeon’ every time she wanted to make a trade. It was hard to keep track of who was next in the cue. The prices catapulted astronomically high and then didn’t drop, even though nobody had any of that item to sell. People were buying 48 tomatoes and then selling them a moment later as the price increased as a result of the purchase. Pretty much everything that could go wrong did. But… there was still something there. Of course, many changes are needed. There’s no way I’d introduce this to a school in this state. But I think the basic idea is fun! I need to get the economy working better and there needs to be organisation around the trades. This one will take some thinking about. 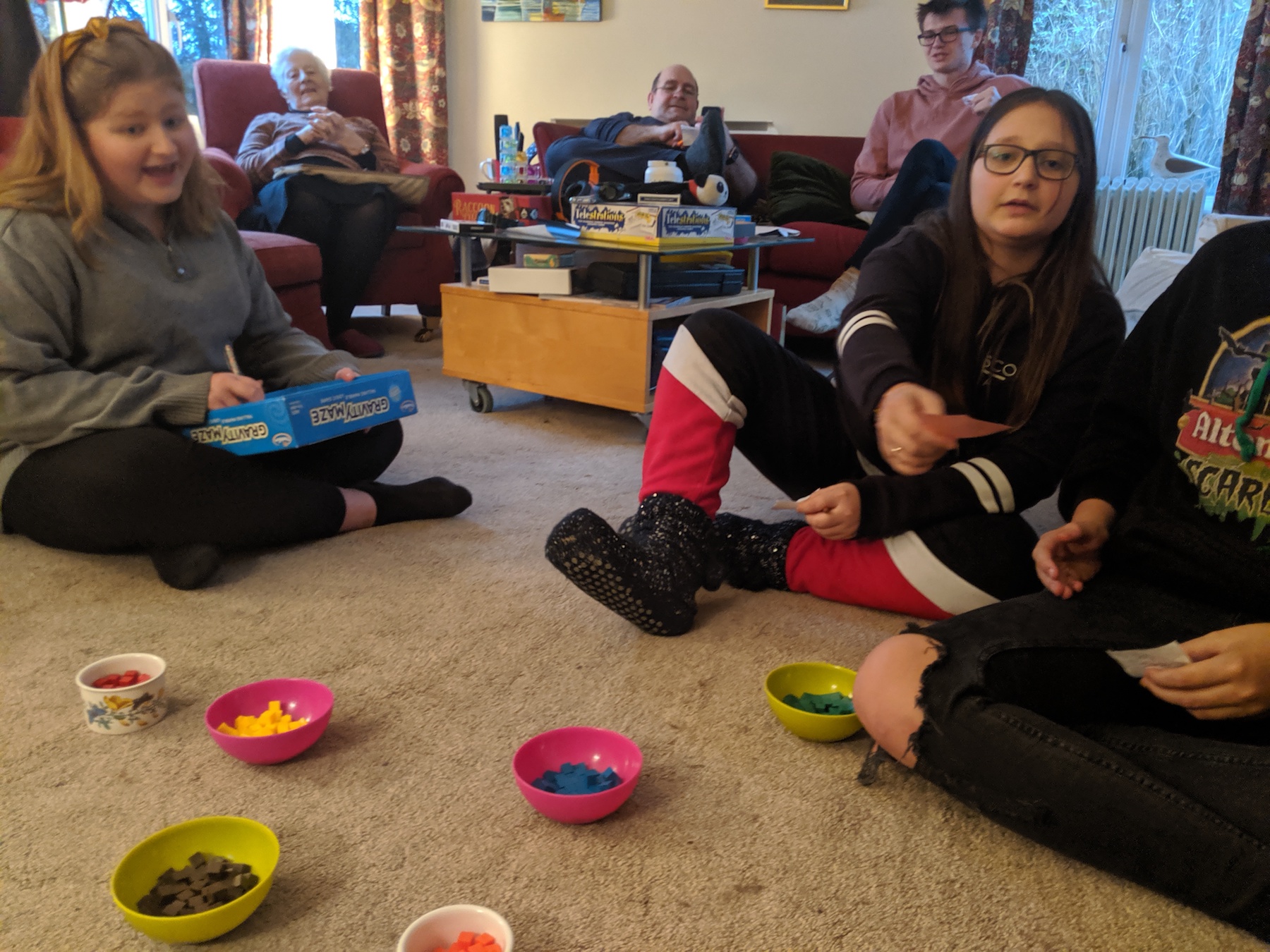 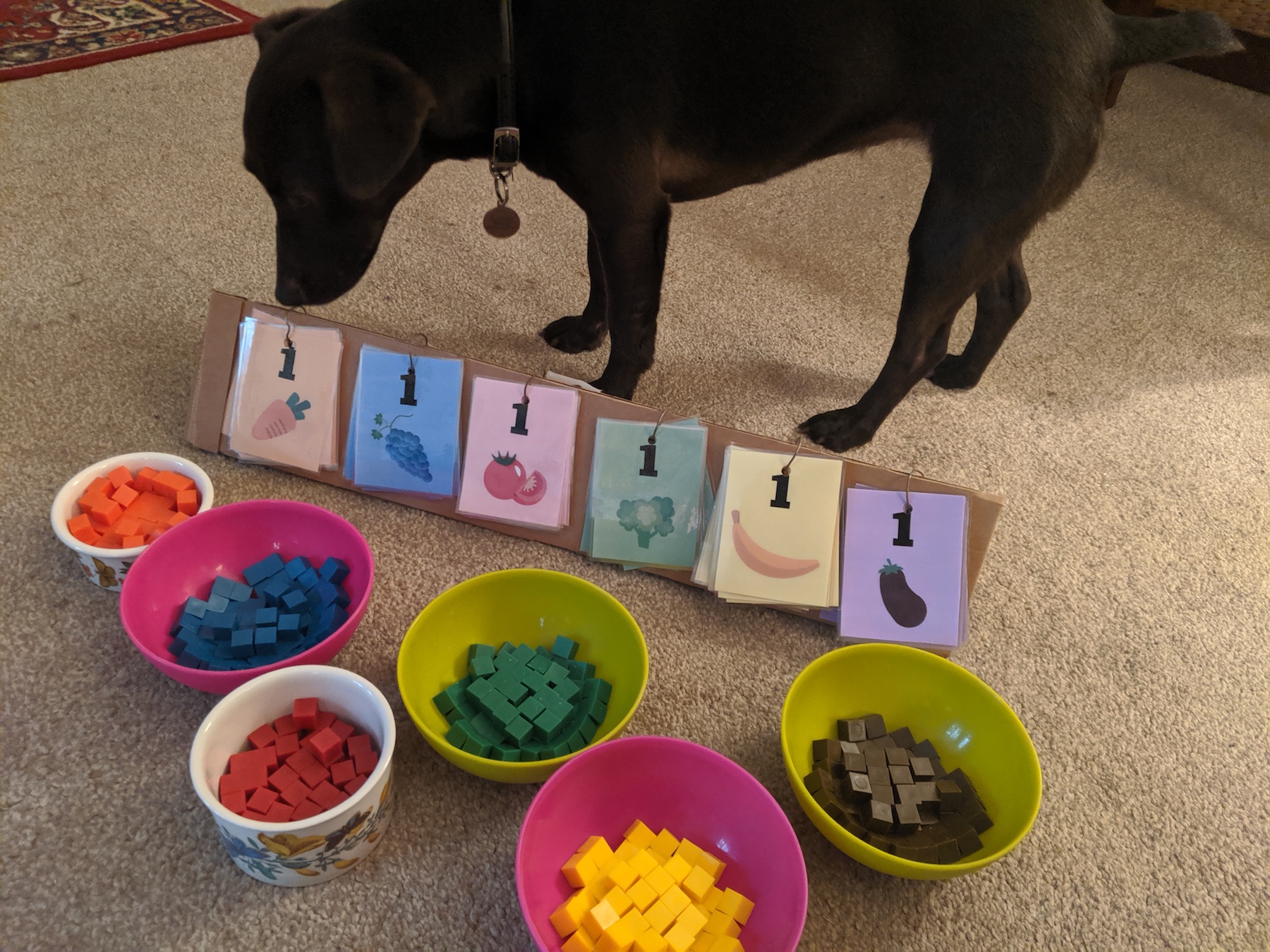